A Feast of Birtwistle 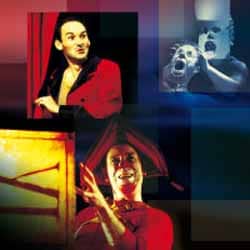 London operagoers are in for a slew of Harrison Birtwistle operas over the next couple of months. 40 years after it was first produced, we shall see not one but two productions of Punch and Judy on opposite sides of the Thames.

Birtwistle likes to give multiple presentations of scenes, viewed from different angles, but it surely exceeds even his ambitions that audiences should be able to experience a complete opera in different interpretations back to back.

It seems extraordinary that after such a long absence, his first opera should re-surface in two different guises almost simultaneously but both main houses will present Punch and Judy within a month of each other. The first run will be a visiting production in the Royal Opera’s Linbury Studio by Music Theatre Wales, while English National Opera’s will continue the company’s studio adventure (it begins with Lost Highway in early April) at the Young Vic on the South Bank.

Punch and Judy is a violent, pounding re-appraisal of a traditional story. Myth is at the heart of Birtwistle’s output and the folklorist nature of the puppet show allowed the composer to explore the savagery at the base of human experience, as the demented protagonist goes on a killing spree of unwarranted ferocity. With music to match, it’s not, maybe, the ideal outing for a first date.

Clipping the end of the ENO’s run of Punch and Judy is the World Premiere of The Minotaur at the Royal Opera House. By anyone’s reckoning, this is a major event, the first fully-staged new opera by Birtwistle in the capital for 17 years (although The Second Mrs Kong received a concert performance a couple of years ago). With Antonio Pappano conducting, Stephen Langridge as director and a starry cast that includes John Tomlinson, Christine Rice and Stephen’s dad Philip Langridge, it promises to be a highlight of the season.

What can we expect from The Minotaur? Well, of course, we don’t know at this stage what Birtwistle and his librettist David Harsent (who collaborated together on Gawain) have done with the Theseus legend, or what form the score will take but, based on previous works, we can anticipate great slabs of sound, not a lot of melody and sinuous burrowing through craggy landscapes of atonality compellingly forced on the listener. Linear narrative is highly unlikely. The composer likes to play with time and action; The Mask of Orpheus sees a series of tableaux of the same event re-enacted with variations, a sort of musical Rashomon (the Kurosawa film where the same incident is seen from multiple and varying viewpoints). The composer talks in terms of musical cubism.

If The Minotaur lives up to its predecessors, we are in for a theatrical and aural feast, even if you need a robust digestive system and an appetite for going well beyond the familiar. The Royal Opera’s production of Gawain (first mounted in 1991 and revived in a revised form in 1994 and 2000) was stunningly realised and ENO’s Mask of Orpheus clings onto the memory like a barnacle on the rusty hull of a clapped-out old trawler. Following its 1986 run, it has sadly, perhaps scandalously, never been seen again.

Be warned, the music and skewed dramatic structure of a Birtwistle opera challenges the tastes and tolerance of many. If you’ve seen one before, you’ll need no recommendation from me, either way, but if you haven’t I urge you to put aside any prejudices you may have and not miss these so rare opportunities to experience work that is unique in its power to stimulate the senses.

There are just 14 performances spread between the two runs of Punch and Judy and that of The Minotaur: