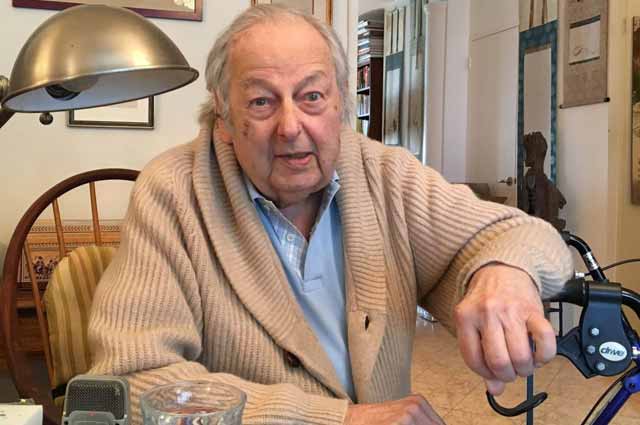 “For another four pounds we could have got Edward Heath…”

André Previn’s 1971 appearance on the Morecambe and Wise Show for a riotous performance of the Grieg Piano Concerto has become the stuff of legend, and it’s often the first thing recalled by musicians and non-musicians alike when Previn’s name is mentioned. But behind the cliché there’s a lot of meaning to be unpicked.

Eric Morecambe (whose quote from that sketch appears above) was, underneath the tomfoolery, an astute and intelligent comedian, and the backhanded compliment being paid here is that while Heath (who was Prime Minister at the time) might have been more famous, Previn, of nearly equal fame, outclassed him as a musician by miles.

All of this leads to the question of why Previn was so well-known. At the time, celebrities were queuing up to appear with Morecambe and Wise (it was, after all, the most popular comedy show on television), and here was the conductor of the London Symphony Orchestra – not exactly a mainstream person of interest – considered recognisable enough to join in the fun. One can hardly imagine Colin Davis or Rudolf Kempe (conductors, at the time, of the BBC Symphony and the Royal Philharmonic Orchestras respectively) commanding the same recognition.

Previn had joined the LSO as Principal Conductor in 1968, and in a 2011 interview about his work with the orchestra, he recounts that his first invitation from them (to make a recording) came after he let slip on Desert Island Discs that he would love a chance to work with them; modestly, he went on to say that “…I wasn’t really ready to be music director of a big orchestra…”.

Although it was the start of a career as a classical conductor of note, it’s worth pointing out that Previn had already achieved, musically, more than most up to this point, having been a composer-conductor at MGM studios since the age of 18, and, in the course of his work as arranger and conductor for Hollywood musicals, amassed four Oscars from eleven nominations. In addition to this, his work as a jazz pianist and band-leader (from 1945 to 1967) had resulted in a clutch of recordings as well as many television appearances in the USA alongside the likes of Sylvia McNair, Bill Evans and Ella Fitzgerald. His first television appearance in the UK was Meet André Previn in 1969.

Under Previn’s leadership, the LSO’s profile increased enormously; their many tours – both around the UK and abroad – made them and him, if not household names, at least an orchestra and conductor that many people knew existed. From 1971 onwards, this profile increased even more due to the broadcasting of a series of performances of popular classics on the BBC under the title André Previn’s Music Nights. Previn’s winningly relaxed style (and the orchestra’s appearance out of concert dress) endeared the programme to many, and these broadcasts enjoyed huge popularity – probably not entirely unconnected with Previn’s appearance with Morecambe and Wise.

Given Previn’s long association with the LSO (after his official retirement as Principal Conductor in 1979 he continued his relationship as a guest with them, becoming Conductor Laureate in 1992 and Conductor Emeritus in 2016), it’s arguable that he was responsible for the ethos of ‘unstuffiness’ that has remained with them; they were, for example, one of the first orchestras with a web presence, and to produce commercial (and online) recordings of live performances. In all of this, we see Previn’s special gift, shared with his near-contemporary, Leonard Bernstein: an ability to communicate and to de-mystify classical music; to take audiences with him on the crossing from the popular genres of film and jazz, bringing along with it a little Broadway and Hollywood sparkle, coupled with a witty intelligence, so that they felt safe in the unknown territory. Perhaps this is what Morecambe and Wise saw when they invited him onto their show.

Along with the careers as performer, arranger and conductor, though, sits Previn’s lesser-bruited work as a composer. Some of this arose from his work with film scores – his own music from the 1967 cult classic Valley of the Dolls being the most obvious example. In addition, though, he leaves behind a large body of ‘contemporary classical’ music: an assortment of concertos for various instruments (including piano, violin, guitar, harp), chamber music (including several sonatas for solo instruments as well as a nonet, a clarinet quintet and the unusually scored 2003 String Quartet with Soprano), music for solo piano, song cycles and, unsurprisingly, a couple of operas using cinematic plots: A Streetcar Named Desire (1997) and Brief Encounter (2007).

Many of the larger compositions are recent works, and it is perhaps here that we see the flowering of the last of Previn’s many careers in music; when age and infirmity mitigated against more interactive musical dialogue, his boundless need to continue to communicate through the medium found a way. In tribute to this great musician, then, posted here is a link to his simple-but-effective Vocalise premièred at the Tanglewood Festival in 1995. It features Sylvia McNair (soprano), Yo-Yo Ma (cello) and Previn himself playing the piano.