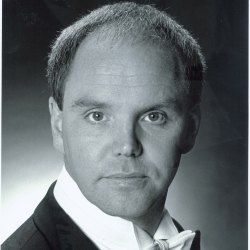 A witty conversationalist and modest interlocutor, baritone Anthony Michaels-Moore’s real-life persona could hardly be further from that of the character he’s about to play at the Royal Opera House. Il Conte di Luna is the evildoer in Verdi’s Il trovatore, which returns to Covent Garden in Elijah Moshinsky‘s traditional production from 30 January. But this time around, he’s tried to develop the character psychologically to raise him above the level of a stock villain.

“It’s different every time you do it,” he says. “The slant that we’ve tried to take for this particular revival is that he and Manrico are both in love with Leonora, obviously, but their interpretation of what love is, is different. Manrico’s is a romantic love, but Di Luna’s is an obsessional love. At the start of the opera he’s not necessarily a bad man. He’s a man who’s enthralled by this obsession. In this production, we’ve provided a twist in his character at the end of the first half. When Manrico comes to rescue Leonora from the Count’s attempt to abduct her, that’s the moment when he starts to go rotten. So when we see him at the start of the second half, he’s turned to drink. There’s a hipflask. Because he can’t have this woman, he tries to find solace in drinking. It was just a way to make him more pathetic, in a sense, and more desperateBy the end of the opera, he doesn’t want to love her: he just wants to possess her.”

On paper, the cast of the current revival sounds exciting. Popular tenor Marcelo Alvarez takes on the role of the titular troubadour, Manrico; American soprano Catherine Naglestad sings Leonora; and mezzo Stephanie Blythe is playing the gypsy Azucena. “It’s been a team effort”, says Michaels-Moore. “We haven’t suffered from egos in the rehearsal room from anybody. The opera isn’t a star vehicle for someone. The opera house has chosen the cast very carefully: they’re all young, and they can act as well as they sing. Stephanie’s doing Azucena for the first time and has brought a youthful enthusiasm to it. She’s had a lot of time to work with the conductor Nicola Luisotti, who loves her and has suggested a huge amount of colour and text inflections that’s been wonderful for someone doing it for the first time.

“Marcelo loves the role of Manrico. He played it in this production for the first time in Parma, and has thrown himself into it whole-heartedly. He gives it all the Italian flair and hot-headedness that the character needs. Catherine Naglestad is a very intelligent musician. Not the biggest of voices but musical, and a good actress on stage. “And the baritone? Well, we do the best we can with him, really!”

“I could imagine life without it, but that would mean losing a lot of colour and excitement and enjoyment…If I didn’t do it, I’d have to find something to take its place. It would be very hard to find something else totally satisfying.” – On singing.

At this point, he collapses into a fit of infectious laughter, something that happens throughout the interview. I ask, what does singing mean to him? “I’m very lucky in that I’m able to do the thing that I love and get paid for it. It’s given me great personal fulfilment and satisfaction through the years that I’ve been a singerI could imagine life without it, but that would mean losing a lot of colour and excitement and enjoyment. I think there’s something physically satisfying about singing as well as intellectually satisfying. For me, it’s the physical satisfaction. It’s the warm glow after a long and exhausting performance of something like Rigoletto, Boccanegra, Macbeth, where you’ve worked extremely hard and searched inside yourself for emotions that you’d normally keep hidden and covered that is therapeutic. I think it’s that therapy, if you like, that I find satisfying. It’s not conscious, really, it’s an unconscious release, that I’m drawn to time and time again. And if I didn’t do it, I’d have to find something to take its place. It would be very hard to find something else totally satisfying.

“I’ve never had such opportunities at the vocal level as I have now, both in terms of the roles that are coming up and in terms of what I can give to the roles, just because I’ve been in the business for so long, I’ve got this wealth of experience. I’m singing as well as ever if not better. It’s very exciting for me. I’m so lucky, and I’m aware of that.”

Michaels-Moore first sang at Covent Garden back in 1987, and he’s seen a lot of changes in that time. “I think I’ve seen the company through good times and bad times, and I have to say that now things are better in terms of the way the company’s run and in terms of the physical structure of the company. It’s never been better. We’re so lucky to have this modern building, modern technology, have the ballet here, have great rehearsal facilities, and generally, have high morale. I sing in all the major opera houses around the world, and obviously some people complain and moan, but if you do great work here regularly, it builds high morale, and I’d say that morale here is very high. People are beginning to be aware that we have a great chorus, and a great orchestra, and a great ballet company. There’s a feeling of justified satisfaction. So that’s where we are.

“It’s never been better. We’re so lucky to have this modern building, modern technology, have the ballet here, have great rehearsal facilities, and generally, have high morale…There’s a feeling of justified satisfaction.” – On the Royal Opera House.

“I think what I’ve noticed is that although we do have a Young Artists programme here now, which is wonderful for young singers going into the business, I’m surprised that Covent Garden doesn’t have some of the more mature singers on contract, so that they could cast things from within the company roster, as it perhaps was in the 60s when we had people like Jon Vickers, Heather Harper and Peter Glossop, who were company artists. It’s great having young singers here doing some of the smaller roles, but I think it would be ideal to have some more mature people in the House to give it a sense of continuity. That’s something I miss. It’s a pity, too, that the Royal Opera doesn’t do the tours that they used to do: that would enhance company spirit as well. I realise the costs of that are enormous, but we are supposed to be a national institution and it would be great to go to Manchester or Birmingham, as well as abroad to America and the Far East.”

The singer has plans to return to the Royal Opera quite regularly, and although he says there’s a hiccup next season due to long-standing commitments elsewhere, it’s clear that working at the House was a formative experience for him. “As a young singer on a Junior Principal contract, one of the greatest experiences for me was to see all the top singers working not just performing, but working in the rehearsal room. I learnt a lot from watching these people in action. The person who impressed me the most out of all my time here was Mirella Freni when she came to do Tatiana in Onegin. She impressed me because of her professionalism, enjoyment of the work, the way she sang, and just the general way she fitted in and made everyone comfortable. There was no ego at work. I found that very impressive.

“I enjoy singers who sing honestly. By that I mean, although there’s a place for intellectual singers in classical music, if you’re singing opera and grand opera in particular it’s possible to have too much intellect. It gets in the way of delivering the music, because everything can be too calculated and artificial. It’s something about the really great singers that allows them to be open and tap what’s inside them, which is wonderful, and it’s not restricted by intellect. There is a musical intellect at work, of course, but it’s an openness and a spontaneity about their singing that’s so special. I’m thinking about people like Pavarotti in his prime, when there was something so spontaneous and fresh and open about his singing which touched people. There were other people like Alfredo Kraus who stylistically and intellectually were probably much better musicians, but something about Pavarotti’s voice was unique. Somebody like Bastianini, or Robert Merrill – it’s not so much the sound but the way they sing that I find very moving. If I wanted musical intelligence and penetrating insight, I might listen to Fischer-Dieskau singing Lieder, but I wouldn’t listen to him singing Macbeth or Rigoletto, because I think stylistically he’s totally wrong. Even though there’s a wonderful intellect at work, his Northern European background and the way that he sings prevents him from getting to the core of the work.”

“The person who impressed me the most out of all my time here was Mirella Freni…because of her professionalism, enjoyment of the work, the way she sang, and just the general way she fitted in and made everyone comfortable. There was no ego at work.” – On singers he admires.

With so many outstanding interpretations behind him already, I can’t help but ask what Michaels-Moore’s ambition is, and the answer’s characteristically modest. “To do it better”, he says simply. “Over the last two or three years I’ve really begun to understand what it is technically and vocally that I can do, and I’d like to go back and do the other stuff all over again to do it better! I’m very lucky. I love what I do, and I’m always interested to build on the performances that I do. There are a couple of roles in the pipeline: I’m doing Falstaff for the first time in Santa Fe in 2008, which will be exciting and challenging because previously, I’ve tended to play the bad guy and it will be nice to do something that’s lighter and brighter and sunny. There are some other things in the planning stages that are different from the main repertoire that I’ve done, which I’ll look forward to. I’m lucky to have sung in all the main houses, and it’s just a question of going back to them, and doing it all better!”

He’s evidently a level-headed and refreshingly down-to-earth person, too, with lots of non-musical activities to keep him going in his spare time. “I go clay pigeon shooting quite regularly in Kent where I live. I’ve started to play golf, and I wish I’d taken it up earlier because it seems I might have been quite good at it! I’m in the process of learning how to sail a yacht, in Hampshire. I’m also a great computer and RVG (Reality Video Game) player, and at the moment I’m hacking my way through Oblivion, if that means anything to anyone?!” Er yes, well, possibly.

As we come to the end of our conversation, Michaels-Moore says that he’d like to be remembered for proving that you don’t have to be Italian to perform Italian opera. And his proudest achievement? “My daughter.”