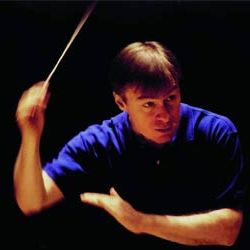 Jiri Belohlavek’s first full season as chief conductor of the BBCSymphony Orchestra shows promise in a series of concerts that reaffirms theensembles commitment to contemporary music, whilst exploring some familiarmasterworks.

In the course of seven concerts Belohlavek will also conductmusic by compatriots Jancek, Dvork and Eben.

A busy Prom season has seen the orchestra allocated a guest leader foreach of their appearances, but Stephen Bryant will return for the opening concert at the Barbican on September 29.

This includes all the principal elements of the season, with Beethoven’s Eroica symphony and Dvorak’s charming American Suite framing countertenor David Daniels in the world premiere of Hojoki, An Account Of My Hut byJonathan Dove. The curiously-titled song cycle sets texts from the 12thcentury Japanese poet Kamo-no-Chomei.

A second world premiere takes place at the opposite end of the season,with John Tavener’s large-scale choral work The Beautiful Namesreferring to the ninety-nine names given to God in Islamic tradition. Thevenue of Westminster Cathedral on June 19 is bound to accord the work asuitable scale, with tenor soloist John Mark Ainsley and the BBCSymphony Chorus sharing vocal duties.

Belohlavek will be conducting a special evening to celebrate theBarbican Centre’s quarter-century as he presides over a welcome performanceof the Janacek opera The Excursions of Mr Broucek on February 25.For a long period this was considered to be a work best performed on Czechsoil, but Belohlavek’s advocacy is most appreciated. An all-Czech cast andthe BBC singers take on Svatopluk Cech’s fable, in which Broucek, thecelebrated pub landlord, is spirited away to the moon. To delve beneath thesatirical plot and the music used to portray it, the Barbican has a studyafternoon beforehand.

For his other appearances Belohlavek will continue his Mahler cycle withthe Third Symphony on April 4, with Jane Irwin the mezzo-soprano soloist inwhat is likely to be an endearing evocation of Mahler’s most obviously’outdoor’ symphony. Meanwhile October 14 presents a populist programme ofJanacek, Mozart and Stravinsky, with Nikolai Lugansky the soloist inMozarts popular Piano Concerto No. 21, and March 17 offers an extravaganzaof music from opera and operetta in the company of Susan Graham andThomas Hampson. Nine days later Belohlavek will conduct aninteresting concert of Brahms, Dvorak and the little known Petr Eben, whoseVox Clamantis of 1969 is a rare orchestral foray for this composerknown primarily for his vivid organ music.

For their annual composer weekend from January 12-14 the BBC has chosento profile Sofia Gubaidulina, the latest choice of near-contemporarymusicians that has in recent years included Carter and Cage. Gubaidulina’sspiritually informed music is a compelling listen, and with possibilitiesof repertoire from solo cello works right though to the mighty St JohnPassion, the BBC has plenty to choose from for the as yet unannouncedschedule. The potential for overload is clear so soon after another majorRussian anniversary in Dmitri Shostakovich, but it will at the least be afascinating opportunity to examine his influence on Gubaidulina, who, likeShostakovich, did not endear herself to the Russian musicalestablishment.

“Gubaidulina’sspiritually informed music is a compelling listen, with possibilitiesof repertoire from solo cello works right though to the mighty St JohnPassion…”

The orchestra will be lending weight to the Barbican’s celebration ofthe music of Steve Reich on the weekend of October 7-8, with hisTehillim contrasted with a newer success, the variations entitledYou Are. The inclusion of Bartk’s Music for Strings, Percussionand Celesta offers the chance to measure the influence of his stringwriting on Reich, seventy years old this year.

Although headed by Belohlavek the BBC SO will as always offer plenty ofopportunities to guests, former heads and conductors coming through theranks. Valery Gergiev is listed as a guest conductor, raising thepossibility of his involvement in the Gubaidulina weekend. ComposersThomas Ads and Matthias Pintscher will conduct their ownmusic. The former couples Stravinsky’s masterly Symphony of Psalmswith the startling vision of his America: A Prophecy on Friday 13April, while the latter will conduct the UK premiere of his cello concertoReflections on Narcissus. The work’s dedicatee, Truls Mrk,will star as part of a richly orchestrated program on Tuesday 14 Novemberthat includes Messiaen, Ravel and Stravinsky.

Sir Andrew Davis will appear for the orchestra’s Christmas special onDecember 16, so after a frantic day of shopping you can enjoy French musicranging over three centuries. The first half is two settings of theGloria, beginning with the present day in Philippe Fnelon’sversion, the UK premiere of a piece inspired by the death of a closefriend. Poulenc’s uplifting setting of the same text will follow, featuringsoprano Christine Brewer, while after the interval the glorioustheme continues in the shape of Berlioz’s Symphonie Fantastique.

The premieres don’t stop there either, with an as-yet unnamed choralwork by Michael Nyman getting its world premiere on March 8, ratherunexpectedly in the company of works by Butterworth, Schoenberg andSibelius! Another BBC commission, the >Diptych of Simon Bainbridge,will be brought to life on February 9 by the orchestra in the company ofBartk and more Scriabin, this time the Poem of Ecstasy.

For those able to get to the Barbican in the early evening it’s wellworth catching the ‘Singers at Six’, a short concert at the adjoining StGiles Cripplegate church that sets the scene for the main event. Theconcert before Bainbridge’s premiere promises the “ecstatic and therapturous”.

Finally Rossini, and his expression of grief at the loss of his mother.The Stabat Mater on November 30, conducted by DavidRobertson, should be a thrilling experience, presented in the companyof a large-scale orchestral work by Ivan Fedele. Once again a UK premiere,Scena affirms the orchestra’s ongoing commitment to new music, partof a season that promises an extremely stimulating set of concerts,whatever your musical preferences!