by musicOMH
published: 1 Nov 2007 in Classical and Opera Features
Tweet 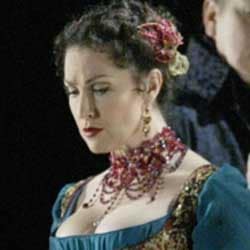 Cheryl Barker has become something of a star at ENO in recent years.

The Australian soprano has played a seductive Salome, an impassioned Emilia Marty, and a handful of Puccini’s hot-blooded heroines.

But now she’s back to tackle Miss Jessel in a new production of Benjamin Britten’s The Turn of the Screw, an opera knotted with sinister secrets and sexual repression.

I arrive at the Coliseum as the dress rehearsal finishes. People are pouring on to the street, buzzing with excited chatter, but the cast have been called back by director David McVicar, and it’s a good half an hour before they’re let out for the afternoon. When Barker finally appears for the interview she is fresh, unflustered, and, for a diva deprived of lunch, remarkably amiable. Perhaps enthusiasm is sustenance enough: the pep talk was encouraging, the performance went well, and it is, she gushes, “a fabulous production.”

Based on Henry James’ famous novella, the opera is narrated by the governess of two orphans at a country house in late Victorian England, who watches with mounting horror as the children become possessed by spirits of previous employees, a manservant Peter Quint and his lover, Miss Jessel. Driven by one of Britten’s favoured themes the loss of childhood innocence the opera’s hint at corruption and abuse can make disturbing viewing for modern audiences, but the blurring of reality and imagination can also make interpretation an issue. Barker has studied the text and has given her character much consideration “I do a lot of thinking on the tube!” and she explains that these mysteries make the piece all the more fascinating.

Quint and Jessel are both mute in the book, but Britten gives each ghost a voice, and I ask if she found it difficult to put flesh on a character that is so indistinct and, well, dead. “Not really because it’s so well written. Peter Quint’s music is very mellifluous, it’s like his mercurial personality, and I think Miss Jessel’s music is very earthy and bitter and cruel, in a way, and that’s part of her character as well.” They are played as real people, not just figments of imagination, but their backgrounds are cleverly alluded to, as Barker explains: “I have a wet look about me, so I have a lot of glycerine all over my face, and a sort of pallid face, so it looks as though I’ve been drowned.”

Despite having played the part of The Governess before, Barker admits she still finds Britten a challenge. “Every bar is different so you’ve got to count because at some point there’s a tricky moment when you need to have your wits about you musically,” she explains. The music is structured by a set of variations on a single theme that are turned, like a screw, through a progression of key changes as the drama unfolds. It’s stark and unforgiving, and a million miles from the rich orchestration of Puccini and Strauss that Barker is used to. “When we had the first sing-through I felt it was a bit like singing in church, it’s all so quiet…there’s no room for nerves and if you go wrong it’s incredibly exposed.”

The rehearsal time just three and a half weeks has been as tight and intense as the piece itself, but Barker has clearly found it an inspiring process and is quick to praise her colleagues: “I think it’s one of the best casts across the board.” She worked with David McVicar on Tosca back in 2002 (“one of the best experiences I’ve had”) and has relished another opportunity. “He’s so clear in what he wants and can put it so succinctly you understand exactly what his ideas are, and for me they’re very akin to what I believe in certain characters.” Barker talks excitedly about “production concepts” and “an interesting twist” on her character, but refuses to give the game away. All she will say, with Jamesian ambiguity, is that “it’s something unexpected.”

As critics have commented, one of Barker’s great qualities is her range, both vocally and dramatically. As a teenager growing up in Geelong, a city on Australia’s south coast, she immersed herself in Gilbert and Sullivan, and dreamt of appearing in musicals. “I loved dancing and singing and showing off, basically.” But after meeting her husband (baritone Peter Coleman-Wright) focus moved to classical music and the pair moved to the UK in 1984 to pursue operatic careers. It was the role of Mimi in Baz Luhrmann’s hit production of La Bohme in 1990 that really kick-started Barker’s career and since then she has established herself on the global stage, tackling music from Mozart to Jancek. With work secured, and demand high, the two returned to Australia a few years ago with their son Gabriel.

Although the couple have performed together in the past, they’ve avoided the fuss that surrounds Alagna and Gheorghiu, and all their tears and tantrums. “It’s fun to work together. We don’t want to become a double-act but it’s a great treat to skip off to rehearsals with your best friend, your husband.” Next year will see the pair touring the capital cities of Australia with a new piece of music written specially for them by Richard Mills, and singing together in Opera Australia’s new production of Arabella. Whilst Barker clearly enjoys the international aspect of her work and, in some respects, feels European, she admits there’s something special about singing in one’s own country.