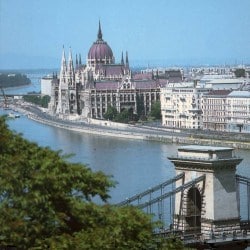 This was not the most ideal time to sample musical life in Hungary as the summer holiday period was still not quite over.

Nevertheless, there was plenty to enjoy, to admire or to be disappointed with.

On Friday 25 August the Czech Philharmonic Orchestra played an all Dvorak concert under their chief conductor Zdenek Macl, with Hilary Hahn as their violin soloist.

The famous and very experienced 70 year old Macl was a disappointment. He seemed to be enjoying himself but he failed to give clear directions; the ensemble work, therefore, greatly suffered. In Dvorak’s Violin Concerto the usually impeccable Hilary Hahn was not at her best. Even she, clearly a cool and poised young lady, must have been put off by the shabby ensemble work. The Symphony No. 9 (From the New World) brought back memories of Sir Charles Mackerras’s performance of the same work – also with the Czech Philharmonic Orchestra – at the Proms last year. That was a magnificant and noble performance. But now, with Macl, the work was either rushed or untidy. Not even the famous cor anglais theme, played beautifully, could save the day.

The venue of the concert – the Palace of Arts – is amazing. It was built in 2005 and, like the Barbican and South Bank centres in London, it houses several organisations. A magnificent concert hall, a theatre and a museum work side by side and offer a very rich cultural programme. At 25 meters in height, 25 meters in width and 52 meters in length the concert hall has the dimensions of a Gothic cathedral. The orchestra podium can be adjusted to three different stage sizes and an orchestra pit can be created from the moveable units. The auditorium accomodates 1700 people. Last but not least, the acoustics of the hall are superb.

Since 1998, late August/early September there is an annual Jewish Summer Festival in Budapest. This year I scheduled myself to attend three of their concerts. The first promised to be of great interest: a concert in memory of dn Prtos. In his youth a student of Kodly and Hubay in Budapest, Prtos was a leading light – as composer and viola player – in Israel’s music life. This concert was programmed to include several Prtos works. Sadly, due to inefficent organisation, the concert was cancelled in the last minute.

The second Jewish Festival concert, which I planned to attend, turned out to be a surprise revelation. I was not surprised by the excellent standard delivered by the Franz Liszt Chamber Orchestra under their superb leader Jnos Rolla. But their soloist for the evening, Russian born Israel violinist Vadim Gluzman, was an unexpected find. In his early thirties, Gluzman exhibits all the positives of Maxim Vengerov but none of the negatives. Throw in a bit of Isaac Stern, mentor of Gluzman, and you might get an idea of the musical approach. The programme was supposed to be including two violin concertos by Mendelsohn: one in D minor and the more famous E minor. But the latter was not performed and nobody bothered to announce anything. The audience took it all in their stride, nobody complained. (Later, the violin soloist and members of the orchestra assured me that the E minor concerto was never on the cards – one wonders, why the organisers included it in the programme, even at the concert.)

With the first concert cancelled and the second omitting to deliver some of the programme, I did not turn up for the third concert. Yet, according to reliable sources, it was very good: Saint-Sans’ Samson and Delila was sung, in a concert performance, by forces of the Budapest Opera House. It seems that ‘third time lucky’ might work at the Budapest Jewish Summer Festival and perhaps I should have gone.

The venue of these Jewish Festival concerts is the beautiful Dohny street Synagogue.It is the second largest synagogue in the world, the largest in Europe. Its oriental beauty creates an imposing contrast to its surrounding. The building, erected 150 years ago, is a symbol of Hungarian Jewry at its best.

3-15 September is the period for the Liszt-Bartk International Piano Competition now taking place in Budapest. 53 competitors, mostly from Japan and Hungary, will battle with demanding and great works by Liszt and Bartk. The competition started off with an opening concert given by the Hungarian Telekom Symphony Orchestra under their excellent chief conductor Andrs Ligeti. Two previous prize winners of the competition, which has been running since 1933, participated in the mainly Liszt programme. Gergely Bognyi (1996 winner), looking and – by all accounts – playing like the young Liszt, fascinated with his rendering of the Piano Concerto in E flat. Kroly Mocsri (1986 winner) impressed with his self-effacing but virtuoso playing and with his mastery of silence in crucial musical moments. The orchestra played with accuracy and verve, conductor Ligeti controlled and inspired all works on the programme (which included Bartk’s Hungarian Pictures and Liszt’s Tasso) from memory. The standard would have pleased Liszt and Bartk.

The venue for this concert, as for the whole competition, was the concert hall of the Franz Liszt Music Academy. The Academy was founded by Liszt; he was the first director and also taught piano there. The list of people who studied and taught at this Academy is mind-boggling though Bartk and Kodly are probably the most significant among them.

For lovers of Bartk’s music, a temporary exhibition (11 April – 31 October 2006), titled as Bartk’s Orbit, is a must. It is displayed in the Museum of Music History at the Institute of Musicology which is located at the historical Castle District of Buda. Several manuscripts, letters, etc of Bartk – normally not on display – are exhibited. This is a deeply moving and highly informative collection.

Three significant Budapest orchestras – Ivn Fischer‘s Festival Orchestra, Zoltn Kocsis‘ Hungarian National Philharmonic Orchestra and the Hungarian Radio Symphony Orchestra (soon to start work with new chief conductor dm Fischer) – were not in evidence late August/early September. But talk of rivalry between Ivn Fischer and Kocsis was definitely in evidence. Hungaroton (the main Hungarian recording company) will issue all of Bartk’s compositions in a new collected edition. Applications were invited for sponsorship from the Hungarian State. Kocsis and his orchestra won the award but Fischer did not like it. So he wrote an open letter – published in a main newspaper – to the Hungarian Prime Minister, complaining about the decision. Notwithstanding Fischer’s anger, I am looking forward to the new complete Bartk edition – yet to be recorded.