by musicOMH
published: 1 Dec 2007 in Classical and Opera Features
Tweet 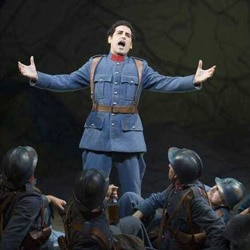 During 2007, musicOMH.com has reviewed over 60 operas and something like 120 concerts. In addition, there have been interviews with many star singers including Simon Keenlyside, Gerald Finley, Philip Langridge, Patrizia Ciofi, Lucy Crowe, Toby Spence, Thomas Allen, Erwin Schrott and Lesley Garrett.

We’ve asked our regular reviewers to give their personal views on the year and here are their choices for the best and worst of 2007.LAURA BATTLE

My first hit of the year came with David McVicar‘s wonderful ’80s interpretation of Agrippina at ENO. A powerful Connolly-Rice-Crowe triumvirate delivered fantastic performances, amidst much gin-swigging and coke-snorting, and the cabaret-style on-stage harpsichordist (and his jazz-inspired ornamentation) was truly inspired. Sadly the same cannot be said for the Caesar clan’s second outing. Chen Shi-Zheng‘s vapid and superficial staging of The Coronation of Poppea stripped Monteverdi’s score of all its passion. It was poor start to the season at ENO, but some amends were made with McVicar’s immaculate production of The Turn of the Screw, which boasted a stellar cast and told the chilling narrative with great subtlety and restraint. Despite missing much of The Ring, savouring instead such baroque delights as Tim Carroll‘s puppet Dido and Aeneas and a Semele from Early Opera Company, I managed to catch Royal Opera‘s student-only performance of Das Rheingold. This hugely impressive initiative offered tickets for as little as 3 (and frankfurters before hand) and proved the popular stereotype of ‘opera-enthusiast’ wrong with a sold-out auditorium of young people. But forget grand opera houses and lavish concert halls, my 2007 musical highlight was witnessed in the comfort of my own home and came entirely free of charge. Alessandro Striggio’s exquisite Ecco si Beato Giorno mass in 40 and 60 parts, lost for nearly 300 years and rediscovered by Davitt Moroney, was given a historic modern-day premiere at this year’s Proms. Even heard via the live radio broadcast, it was an awe-inspiring, life-affirming experience.

Two of my concert highlights involved visiting orchestras from the United States. The Boston Symphony Orchestra under James Levine gave illuminating and exciting performances of Elliott Carter’s Illusions, Bartk’s Concerto for Orchestra and Brahms’s First Symphony. Meanwhile, the Chicago Symphony Orchestra, led by Riccardo Muti, provided music making of comparable quality in Tchaikovsky’s Sixth Symphony, Hindemith’s Nobilissima Visione and Scriabin’s Poem of Ecstasy. Two operatic productions disappointed me. Firstly, a concert staging of Korngold’s Das Wunder der Heliane with the London Philharmonic Orchestra under Vladimir Jurowski failed to convey the work’s romantic longing and erotic ardour. This was the UK premiere and many people will have been left with a poor impression of one of the great operas of the 20th century. The second was the Royal Opera‘s Parsifal. Whatever the merits of the first night, which was reviewed here and elsewhere, some fine singing at the third performance was not sufficient to make up for the banal production or an orchestral performance under Bernard Haitink which lacked mystery and passion. Finally, it was a good year for Mahler. Claudio Abbado and the Lucerne Festival Orchestra brought a refined performance of the Third Symphony to the Proms. Simone Youngs performance of the Second Symphony with the London Philharmonic Orchestra underplayed the music’s reflective side but provided excitement beyond measure. Gennadi Rozhdestvensky, also with the London Philharmonic, provided an elemental and sublime reading of Mahler’s Third Symphony. For me, it was the outstanding concert of the year.

Although the ENO wheeled out more turkeys than a Bernard Matthews farm in December, the Royal Opera wasn’t without the occasional howler and I can’t think of a worse production than Stanislas Nordey‘s execrable staging of Pelleas et Melisande: mind-numbingly miserable, static and torpor-inducing. ENO reached a nadir with an interpretation of Carmen so woeful in its execution that it goes down as the worst evening I’ve ever spent in a theatre. It wasn’t all bad: Sir Simon Rattle gave the UK premiere of Ades’ kaleidoscopic Tevot with a Berlin Philharmoniker at the top of its form; Bernard Haitink conducted an incandescent Bruckner’s 8th at the Proms with the Concertgebouw; whilst for me the musical revelation of the year came from a composer about to turn 100! The Boston Symphony‘s performance of Elliott Carter‘s Illusions was the single most important and exciting piece of music I heard all year unforgettable. Then there was a whole host of memorable performances including Alice Coote‘s sensational Sextus in La Clemenza di Tito, Death in Venice and The Turn of the Screw (all ENO), Richard Jones‘ Gianni Schicci with Bryn Terfel, Sir Charles Mackerras‘ scrupulous revival of Kat’a Kabanova, and Elina Garanca’s auspicious debut in Cosi fan tutte, (all Royal Opera). But for me the highlight of the year was Bernard Haitink’s return to opera with a quite awe-inspiring, transcendental performance of Parsifal at the Zurich Opera. His return after a 5-year absence to Covent Garden with the same work was sublime, but the production and singing was even more coherent in Zurich, with Matti Salminen delivering probably the finest performance of the year as Gurnemanz.

English National Opera have endured a troubled 2007, but their two Benjamin Britten productions were musically and dramatically inspiring. Ian Bostridge looked too young to play Aschenbach in Death in Venice, but Deborah Warner‘s beautiful, focused staging was compensation enough. Turn of the Screw was an unequivocal triumph, the ambiguous sexual relationship between George Longworth‘s inscrutable Miles and Rebecca Evans‘s troubled Governess a horrifying centrepiece to a chilling drama. Earlier in the year, the Royal Opera mounted a superb production of Jancek’s Katya Kabanova, the imposing staging matched by a high-calibre vocal performance. Both companies did, however, struggle to maintain a consistently high standard of performance. One hardly needs reminding of ENO’s recent run of duds, so let us turn our attention instead to the Royal Opera. Iphignie en Tauride, however well sung, remained trapped in a dour, oppressive black and white set; similarly, Pelleas and Melisande took a stupendous cast of singing-actors, dressed them in oversized fashion parade pap and bade them stand motionless in a series of oblique, anonymous boxes. The company’s more recent Parsifal encounters similar troubles, the by-turn depressingly dank and trivially pantomimic staging undermining Bernard Haitink‘s incandescent conducting and the exceptional singing from every performer. Away from the opera houses, this year I especially enjoyed Charles Mackerras conducting Jancek’s Sinfonietta at the Royal Festival Hall and the LSO Chamber Ensemble joyfully performing Saint-Sans’ Carnival of the Animals at the Barbican. The BBC Proms season was not highly memorable, but there were many concerts of merit. Michael Ball‘s appearance was not one of them.

Having seen pretty much everything the major opera companies put out during 2007, and quite a lot else besides, I found this generally a strong year. ENO certainly went through a very bad patch but they also did some terrific work. Deborah Warner‘s Death in Venice was marvellous and the Aldeburgh Festival‘s completely different production of the same opera was also very impressive. In fact, it was a great year for Britten fans. I found British Youth Opera‘s Albert Herring the most enjoyable evening I had all year. Glyndebourne‘s production was good too while David McVicar‘s Turn of the Screw at the Coliseum was wonderful. The concert performance of Billy Budd at the Barbican brought this difficult work alive for me. It was also a good year for Wagner, with the Royal Opera‘s first full cycles of Keith Warner‘s Ring and also Haitink‘s Parsifal. Like many people, I had very mixed feelings about The Ring but loved Walkre and Gtterdmmerung. I enjoyed The RO’s L’elisir d’amore much more than the same team’s La fille du rgiment but I was in a small minority there. Both Gianni Schicchi and Katya Kabanova at the ROH were marvellous, as was Opera Holland Park‘s production of Montemezzi’s Re de Tre Amore. Back at ENO, I loved Handel’s Agrippina. On the negative side, the run of four productions at the Coliseum (Kismet, Carmen, Coronation of Poppea and Aida) was a depressing period, a nadir in the company’s history. I enjoyed meeting Keenlyside, Finley, Langridge etc and my favourite interview was with the directors Patrice Caurier and Moshe Leiser. Most memorable quote was the latter defining opera as “music meets meaning”.

Tell us what were your highlights and lowlights of the year

You can read reviews of most of the productions/interviews mentioned in our opera, concerts, and features archives