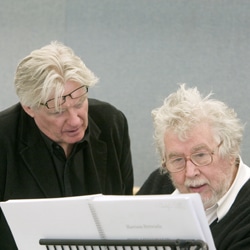 Award-winning poet David Harsent has collaborated with composer Harrison Birtwistle for over 20 years. The latest result of this long-running relationship is their second opera, The Minotaur, which opens at Covent Garden on 15 April.

Aware that opportunities to talk to the librettist of a major opera are rare indeed, I grabbed the chance for a chat with him at the Royal Opera House during a break in the final week of rehearsal.

Harsent has drawn together the various versions of the Theseus legend and thrown in a few innovations of his own. Chief among these is giving a motivation to the hero for dumping Ariadne on the island of Naxos, in the wake of the Minotaur’s defeat . “It’s never explained in any version of the myth I’ve read,” he says. In his libretto, it’s pretty clear that Theseus is very reluctant to take Ariadne with him on his black-sailed trip back to Athens (although this later part of the story isn’t shown). In fact, the only way she can get him to help her escape from her Cretan prison is by deception, by setting him a puzzle and fixing the result. “It’s a corrupt deal and a corrupt relationship. She cheats while he has no intention of taking her home,” he explains.

On the subject of motivation, why does Theseus puts himself in such a perilous situation by taking on the task of killing the monster terrorising the land by devouring sacrificial youngsters? Surely, it’s a noble and altruistic act? “Not completely,” he says. “It’s to do with honour. He is addressing the debt that Athens owes Crete, so it’s about patriotism and chauvinism. And pride.”

The part of Asterios, the half-man, half-bull was written for John Tomlinson, and Harsent says that that was as much in his mind in writing the text as it was in Birtwistle’s when composing the music. When the Minotaur speaks, as opposed to the grunting and roaring that accompanies his early appearances, his text is eloquent and poetic, at odds with his savage nature. “In a purely practical sense, I had to find a way of giving John Tomlinson the lines,” he laughs. “It’s in part a device to deal with that but also he breaks through into language in the dream sequences and also at the end, as he’s freed through death.” It’s as though the monster becomes more human when it’s too late.

The man beneath the mask

The conflict between the human and bestial faces of humanity is a strong theme in the opera. This is carried through to the staging, where the man can be seen clearly beneath the bull mask; attention is constantly drawn to the fact that the monster we see is also, at least in part, a human being. Without wanting to squeeze contemporary “relevance” into this, I ask Harsent if it doesn’t reflect the way nowadays we are so quick to demonise our enemies and see them as monsters. Politicians (some) are just beginning to understand that the only way to break cycles of violence is to sit down with the other side and talk (just think of the Good Friday Agreement). It will only be a matter of time, decades perhaps but it will happen, when we will see Al-Quaida as human beings and begin talking to them.

Harsent is quick to pick up on the point. “That hadn’t occurred to me but it’s absolutely right. We do it every day in our cars too. We very quickly loathe people who overtake us or cut us up at the traffic lights.” Maybe, in that mundane and everyday example is a little part of the archetypal nature of the legend, the way we can turn others into figures of hate because they defy our wants or desires. “It’s necessary to do it sometimes,” he adds. “Soldiers in battle for instance have to see their enemy as loathsome, or they couldn’t kill them.”

“Harry trusts me… we’ve never had a row”

At the other end of the scale of human interaction, the relationship between these two artists, the wordsmith and the music man, seems to be a harmonious as well as fruitful one. Harsent talks with enthusiasm and obvious affection for his fellow creator. “Harry trusts me. He’s been quoted as saying that I give him what he wants. My side of it is that when I give him what I’ve written, I get back what I want. We think alike. I think if we dreamed about the same subject, our dreams would be versions of the same thing”, he says. “He’s never asked me for a line cut and we’ve never had a row.”

Gawain hasn’t been their only collaboration. Since then, they have worked together on the delightfully haunting setting of the poem The Woman and the Hare. It was intended as a song cycle but the composer used what Harsent had written as spoken rather than sung text. Underneath the speaking of the poem (in live performance and on disk, the reciter was Harsent’s actress wife Julia Watson), Birtwistle sets brittle, sharp, shiny fragments for soprano, against a flowing accompaniment for small ensemble. They call these sung interpolations “broken glass”, a description that immediately resonated with both men. A second work on the same subject, shifting from a rustic to an urban setting, was sadly never completed, although Harsent did write the poem. As well as putting the finishing touches to the opera, the two are currently working on a new project for a future Aldeburgh Festival.

Gawain was Harsent’s introduction to stage work but, as well as being married to an actress, he’s long been an avid and regular theatregoer and this, coupled with Birtwistle’s extensive experience in the theatre (he worked alongside Peter Hall for years at the National), made the transition from poet to dramatist an easy one.

“If opera’s a club, it’s one that anyone can join”

Philistinic pessimists are constantly touting the demise of poetry, just as they are the decline of classical music and opera, but Harsent sees these claims as completely unfounded. The word “elitist”, applied to either art form, rouses him quickly to anger. “Harry says that if opera’s a club, it’s one that anyone can join if they want to, and the same’s true of poetry,” he says emphatically, describing the current state of the art, as strong and vigorous. “There are many fine poets writing in this country at the moment”, he declares, adding that poetry criticism is also in a very healthy state.

The libretto for The Minotaur is bold and exciting and reads as compellingly as any play text. It’s an easier read than the book of Gawain, less elliptical, more straightforward, spilling out like a Greek tragedy. There is violence aplenty particularly striking are the Keres, malevolent versions of the Valkyries, who circle like vultures, then swoop to eviscerate the fallen – and it has the potential for thrilling stage effects. With the combined talents of Harsent and Birtwistle, and a creative team that includes Stephen Langridge (director) and Alison Chitty (the designer who made Gawain an unforgettable spectacle), there is a high expectation that this week’s premiere is going to be an unmissable event.

Read our review of The Minotaur by clicking here