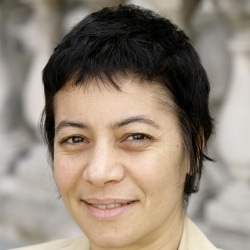 A special excitement is gathering around the Royal Opera’s next production it’s the world premiere of an opera that has been several years in development.

Bird of Night was originally a short piece written by Dominique Le Gendre in 2003 for a festival at the Linbury Studio Theatre called “Nitro at the Opera”.

Now the Royal Opera has commissioned her to extend it into a full-length chamber opera to a libretto by Paul Bentley.

The synopsis of Bird of Night is quite complicated, but Le Gendre points out that there is one leading theme: “It’s about going after your dream. There are lots of other themes, too, which seep into that. The heroine is in a family context, and the way that she goes after her dream affects all the people that are around her. There’s also sacrifice, guilt, and individual identity, as well as national identity.”

“It’s also about the price of this,” adds Zorn. “There is a price for following one’s dream, and one may not realise that until a very late stage!”

Bird of Night is set in the late 1950s in a seaside fishing village of the Caribbean such as Speyside in Tobago or Grande Riviere in Trinidad. How does Le Gendre evoke this atmosphere? “With the orchestra but also in the vocal lines,” she says. “Everything that the characters say comes from their emotions. And that is either highlighted or contrasted by the orchestra.”

“What the orchestra has to say has direct contact with where the characters are at that particular point,” reiterates Zorn.”Sometimes it can contrast, sometimes it can mirror and sometimes it can comment upon what is happening on the stage. There are zillions of colours in this piece, but each colour is an emotion, completely married to the feelings.”

Eschewing the gimmickry of some modern pieces that use exotic instruments to grab the attention, the instrumentation of the piece is very conventional wind section, strings, and so on. Says the conductor, “The rhythm of the language is very composed into the music and in that way the percussion highlights it. But it’s not exclusive to percussion there is a lot of variety of rhythmic figures in the orchestra that mirror the emotional content. Only in one scene is percussion a feature, with the use of a whole chorus playing bamboos sticks, but even there it is part of a ceremony.”

“It has remarkable things in it,” Zorn continues. “The need for extreme needs of expression from the operatic voice can make people forget what line is about, and I think that this piece is a great reminder in that sense.”

“That’s true, though that’s not my intention it’s just that my natural means of communication is through the voice. I want to write a line that is a pleasure for the voice to sing a line that is sensual,” adds Le Gendre.

“It’s idiomatic it exposes the voice at its absolute best,” says Zorn. “And the same goes for the instruments: for each instrument it’s written in their home territory and they feel comfortable playing it because of that. If it’s on uncomfortable territory, it’s for a reason. For instance, there is a motive in the first half and in the second half it has a different context and is in a different register. The same melody appears an octave lower, and it’s really low. That’s very effective because it makes the voice speak in a certain way and conveys what the character feels at a certain point.”

What are the challenges of conducting a new opera? “Well, nobody comes to it knowing it. There’s a great sense of freedom and liberty so you can really explore the work, and you try to do that with any piece. It’s harder when there’s a tradition attached to it and you think of all the people who have done it, and so on. On the other hand, because it’s something that’s not been tried before, you have to be very ready to change completely and face reality more so than if it’s a repertory piece.

“But if it’s in the repertory,” Zorn continues, “You kind of know how it’s going to go roughly, and if you don’t you have people to ring and ask! With a new piece, you learn it as well as you can. And then you hear it once, and you have to have the courage to say, ‘Actually, what I planned here is completely wrong, and I have to let go and do something different.’ So in that sense you need to be very adventurous.”

The opera has been a long time in the planning, and the pair tell me they’ve been collaborating on it for some time. “It’s not changed that much during that time, though,” Le Gendre says. “The two of us work in perfect harmony!”

Was the story autobiographical? “It wasn’t intended that way,” states the composer. “But inevitably there are things I identify with in the location and characters. The tale is on one level very fantastical, but it remains very universal.

“I played quite a large part in the shape of the story,” she continues. “First of all, this opera came out of the first Bird of Night that I did in 2003, which is a pure adaptation of an existing short story. Then, when Paul Bentley [the librettist] and I met , I gave him a complete list of characters and a character breakdown, a storyline, and a pile of books on Trinidad. He came up with a detailed synopsis, which we then worked on and he wrote the first draft of the libretto. We’ve kept working on it right until the last moments, actually. Even though the libretto was finished, as I wrote there were things that he revised.”

The orchestra, the Britten Orchestra, is not conventionally an opera orchestra. How are they coping? “They’ve been phenomenal so far,” says their conductor. “They are fantastic musicians. They’ve picked up colours in an instant one word and they relate the content very quickly.”

When I ask him about his favourite memory of his time with the Royal Opera as a Young Artist, Zorn highlights “the production of Lady Macbeth of Mtsensk, which I worked on when it was new (but not in the current revival). That was one of my great moments Richard Jones, Antonio Pappano and the team around them they were incredible.”

Bird of Night has many fantastical elements in its story, so I asked how the production deals with them only to get two mischievously mysterious looks in return. “Should we tell him?” Le Gendre asks Zorn. “I think I can answer that actually, without giving anything away!” he replies. “I think the production works on what we experience and feel as an audience, rather than on how we show everything.”

“Yes. It’s not a literal translation,” Le Gendre reaffirms. “It makes us grow it’s completely poetic and very surprising, because you might expect a literal translation of how this girl learns to fly, and she does fly but not in the way you might imagine. There are birds in the air but there are no wires; characters fly but there are no harnesses.”

There are seven performances of Bird of Night between 19 and 28 October. But, Le Gendre insists, “the story isn’t finished. I see it as part of a cycle that will develop over time.”