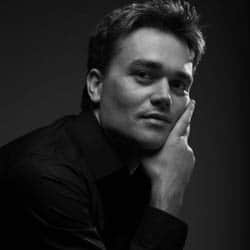 The industrial wastelands of East London are an incongruous setting for the studios of English National Opera. However, this is where Music Director Edward Gardner and his cast are spending the next few weeks in preparation for next month’s production of Harrison Birtwistle’s infamous chamber opera, Punch and Judy.

The timing of my interview with him could not have been worse. News of Anthony Minghella’s death is just breaking: phones are buzzing, a small crowd is glued to BBC News 24, and Gardner is understandably shocked and rather preoccupied. Not only has Minghella been “a great ally”, masterminding ENO’s current production of Madam Butterfly, which was recently revived by his wife, Caroline Choa, but rumours abounded that he would direct a new St Matthew Passion next season.

Having extricated Gardner from the distractions of the rehearsal studio, the two of us wander into a pokey little side room that is windowless and, apart from a barber’s chair and sink, completely bare. It has the atmosphere of a torture chamber and, we both agree, a funny smell, so we relocate to a corner of the campus caf and, sitting knee-to-knee, begin bellowing at each other over an almost Birtwistlian soundscape of clattering plates and coffee machines.

When he assumed his position as MD last spring, some doubted the competence of such a young conductor, particularly in the light of ENO’s recent funding threats, job cuts, and very public in-fighting. But one year in it appears that Gardner has proved his critics wrong, and meeting him one gets a sense of the tremendous drive and charisma that lies behind his handsome face and floppy hair. This season has had its ups and downs some early calamities (Carmen, Poppea, Aida) were followed by notable successes (Turn of the Screw, which has just been awarded an Olivier, and their first Lucia di Lammermoor) but he insists he has enjoyed the last year “immensely”. Given the peripatetic lifestyle of most professional musicians, he likes having a sense of firm attachment and a base in the UK: “it was actually lovely coming back from Paris and feeling like I was coming home.” At just 33, Gardner has youth and energy on his side, not to mention bags of talent; it’s hardly surprising that journalists make the lazy comparison with David Cameron.

Whether that’s flattering or not is debatable, but Gardner has certainly mastered the politician’s approach to press probing. When our conversation turns to Sally Potter’s new production of Carmen, this season’s disappointing opener, I ask about the effect that such negative criticism had on the cast and creative team. “Well it got a range of reviews,” he corrects me, “yes, on the one hand you can read the negatives on the faces of the performers, no one’s going to like that, but we sold an enormous number of tickets and the audience response was so enthusiastic.” Does he think the season has been a success? “Er, I don’t know, I haven’t looked at it in that way,” he says, before sidestepping the question; “I’ve enjoyed working with the orchestra chorus, I’ve loved the work we’ve done, but I’m looking forward to the future and to helping the institution be as great as it can be.” And statistics show the future’s bright: “our autumn season had a forty per cent rise from the year before”

The son of two medics, Gardner followed a well-worn path from cathedral choir school via Eton to read music at Cambridge, where he revelled in the fantastic conducting opportunities (his projects included Mark Anthony Turnage’s Twice Through the Heart and unrealised plans for Punch and Judy) although he regrets, in hindsight, not opting for literature or a language instead. “I don’t think of my degree as wasted time but I didn’t buy into the curricular stuff and I don’t think I’d actually advise anyone wanting to be a conductor to read music at university.” Gardner stumbled into his first big break whilst still a postgraduate student at the Royal Academy of Music, when he was invited to assist the distinguished Austrian conductor Michael Gielen at the 1999 Salzburg festival after a rptiteur fell ill. From there he rose quickly through the ranks, working with Mark Elder and the Hall Orchestra, before his appointment as Music Director of Glyndebourne on Tour in 2003.

“(Punch and Judy) could have been written today”

Although Gardner’s present position offers a certain stability, his schedule remains incredibly hectic. Punch and Judy rehearsals are well underway, he is still conducting a Rake’s Progress in Paris, and ENO’s new production of Der Rosenkavalier is already on the horizon: it’s a crazy juxtaposition, both geographically and musically, and as he says, each of these operas requires a totally different approach to conducting. “What’s so amazing to me is that Punch and Judy was written just 17 years after The Rake’s Progress, which was written a decade after the last Strauss opera. It’s incredible, you play this piece now and it could have been written today or in 2040.” It is actually forty years exactly since the opera was first performed, and whilst Royal Opera have offered a dutiful revival, ENO is celebrating with a new production from the director Daniel Kramer. Gardner is quick to sing his praises: “he’s got this amazing knowledge of the Punch and commedia traditions, so he’s bringing a huge variety of styles and gestures to the production,” and rhapsodises about the rest of the cast.

Birtwistle is musical Marmite you either love him or hate him and reactions to his work can be quite extreme. I mention the hecklers that tried to disrupt a performance of Gawain at Covent Garden and the furore when Panic premiered at the Last Night of the Proms. “Outrage is fine,” he smiles, “there’s outrage about what’s on TV at seven o’clock every night.” Punch and Judy is certainly a very specific piece but it will always attract a good mixture of cult followers and game first-timers, unable to resist an opera that has been described as lurid, grotesque, aggressive, and uncompromising. Although the opera is highly unsuitable for children, Birtwistle’s score involves a range of childish motifs that are deliberately and unsettlingly disfigured. “Today we’re used to a lot of noise, a lot of varied noise, and a lot of violent noise, but my God, I can’t imagine what it was like in the sixties, when they weren’t used to such a huge range as we are now, both visually and audibly,” he says. Benjamin Britten allegedly walked out half way through its premiere at the Aldeburgh Festival, and at the very least believed the work to be misguided, but Gardner says he identifies a lot of Britten pastiche in the score, and thinks Birtwistle used Britten “more than either would be prepared to say.”

Whilst clearly relishing the demands of modern opera, Gardner has made no secret of his desire to tackle some heavyweights from the nineteenth century and fin de sicle, and there is already talk of Wagner featuring in 2010. He scored a big success on the opening night of the 2006 Edinburgh International Festival with a concert performance of Elektra, and after a brief sojourn at the Barbican for Kaija Saariaho’s Adriana Mater in late April, will return to ENO to conduct Der Rosenkavalier for the first time. Not only has David McVicar’s acclaimed production been blessed with an “absolutely first rate, fantastic cast” but, as Gardner explains, the Coliseum provides the ideal acoustic setting for this work: “German repertoire’s great because the pit’s low but it has this incredible bloom. I’ve done the big scenes from Rosenkavalier for a friend of mind – it’s great music.”

Looking ahead to future seasons, he says they’re planning some Ligeti, along with new work from young British composers, and promises that musicals will continue to be strongly represented: “I think it’s great for us to do a wide range of repertoire. I can’t stand it when people try to put up some sort of barrier between opera and musicals. Candide is as serious as anything else we’re doing this season.” I ask if he shares Birtwistle’s low opinions of pop music, which were famously and explicitly expressed at the 2006 Ivor Novello Awards. “I listen to some pop music and I’m sure he does too,” he says. Like what? I persist. “A bit of Franz Ferdinand, a bit of Coldplay…” Maybe those Cameron comparisons were sharper than I thought.