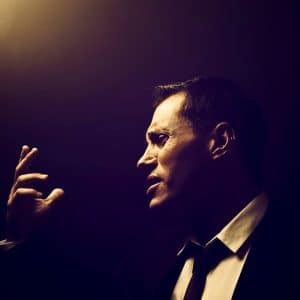 Devilishly handsome with a voice that can charm the most demanding of critics, the young Uruguayan bass-baritone Erwin Schrott has become something of a sensation in the opera world.

Skimming over the press hype (“sexy and sensual””a born stage animal”) an uninformed reader might easily mistake him for yet another proponent of Andrea Bocelli’s ‘can belto’ style or heaven forbid the next Ricky Martin, but such wild assumptions could not be further from the truth. Schrott may be easy on the eye but he also comes with an impressive CV. Born in 1972 in Montevideo, he began playing the piano as a young boy but went on to develop his voice as a chorister.

It was not long before Schrott made his operatic debut at the Municipal Theatre of Santiago in Chile, and in 1998 he snapped-up a coveted award in Plácido Domingo’s Operalia competition. It is an honour that over the years has launched the careers of Joyce DiDonato, José Cura and Rolando Villazón, amongst others, and it set Schrott on the sure path to stardom. He is now in demand across the world and, despite having tackled a range of different roles (most notably, Escamillo in Carmen and Mephistopheles in La Damnation de Faust), he has quickly established himself as a Mozartian specialist.

Having debuted at The Royal Opera with the role of Leporello in the 2003 run of Don Giovanni, Schrott returns this month to take on the Don himself in a revival of Francesca Zambello’s controversial production. We meet in a snatched lunch-break, during a busy day of rehearsals, but he appears completely relaxed and talks with great animation whilst tucking into a fruit salad. To describe Schrott as enthusiastic would be an understatement: he positively radiates charisma and conveys a genuine passion for his work during our brief encounter.

London is one of his favourite cities and he sounds thrilled to be back. “I don’t want to hurt Paris or Florence, which I love very much, but it’s always great to be here,” he says. “In London people come to enjoy theatre, they don’t get distracted by the theories they might know, they don’t try to behaaaaaave! Audiences are fantastic here, I love them.” Judging by the way Schrott is received at Covent Garden, that affection is mutual. As Figaro in David McVicar’s hugely successful production of Le Nozze di Figaro last year he earned a glut of rave reviews and inspired excited comparisons with the celebrated Welsh baritone, Bryn Terfel. But if it was Figaro that won over the British public, it is Don Giovanni that is recognised internationally as his signature role.

“Audiences are fantastic here, I love them”

Schrott takes me right into the complex psychology of opera’s most famous Lothario, explaining that he could never imagine tiring of the character, which is lucky, because the demand doesn’t look like drying up: he has a couple more Don Giovannis lined up this year and has just been booked for one in 2012. “If I thought I had found the answer I would play him exactly the same way every time, and it would be principally boring for me but also for the people who see me in different theatres all over the world there are a million different ways to play this character, you can go really deep and you can have a lot of fun.”

Contrary to the taste of some critics, Zambello’s interpretation puts a huge emphasis on visual spectacle: the production is characterised by its colourful sets and flamboyant period costume (designed by the late Maria Björnson), and the opera culminates with Don Giovanni being accompanied into Hell with some dazzling pyrotechnics. “That’s when Don Giovanni gets a beautiful tan,” Schrott laughs “you’ll see me get browner and browner at each performance.”

He goes on to describe his first encounter with the fire machine: “Last time I did Leporello we were told we’d do a rehearsal with the flames and I thought ‘OK yeah, flames, no worries’ but when they appeared I was like ‘aaaaaaaaah’ they were huge!” Schrott tells the story with some wild arm flinging and all the appropriate sound effects: it’s clear that acting comes as naturally as singing, but his theatrical personality is tempered by a wonderfully self-deprecating humour.

“I’m really kicking some arses over there!”

When I ask Schrott about the physical demands of playing Don Giovanni, his face lights up. “Oh, I’m really kicking some arses over there!” Ah, so lots of sword fighting then, I nod. “Noooo, real kicking arse!” he laughs, and goes on to talk excitedly about working with the distinguished fight choreographer William Hobbs: “He’s exceptional, he’s such a gentleman and he’s teaching us all the techniques to make it look like we are having a real fight while hardly touching each other.”

Schrott is supported in this production by a glittering cast, which includes Robert Lloyd, Ana Mara Martnez and, of course, the glamorous Russian soprano Anna Netrebko (“a wonderful girl, so smart”) who is reprising her role as Donna Anna. When asked about ways of attracting younger audiences to opera, he explains that the key is to create believable characters on stage: opera singers must also be able to act. “There used to be a stereotype about opera, you know, this fat guy with a beard, smoking in the middle of the stage going ‘waaaaaaah'” he says, breaking into warbled song. “Those sort of people are not working in opera any longer, thank God.”

As a flourishing performer, Schrott has a great many roles in his sights, but says he will always have a soft spot for Mozart: his suitability for the part of Don Giovanni, he assures me, has nothing to do with the attractiveness of youth. “Don Giovanni is not about how good you look, it is about how you are, it is a way of being,” he pauses briefly “you could definitely play a Don Giovanni at 75.” I hope I’m around to see it.

Tickets are available at roh.org.uk