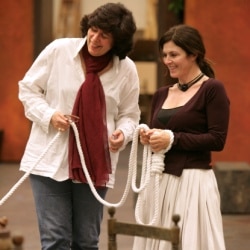 American opera and theatre director Francesca Zambello’s productions have been seen the world over.

From La bohme in the round at the Royal Albert Hall to Aladdin: The Musical for Disneyland, and from Berlioz’s epic Les troyens at the New York Met to Oscar-winning composer Rachel Portman‘s TV opera The Little Prince: you name it, she’s done it.

Hot on the heels of a revival of her production of Tchaikovsky’s Queen of Spades at the Royal Opera House, she’s now back there to direct a new version of Bizet’s Carmen.musicOMH.com caught up with her on the eve of the opening, to find out what to expect from the new production.

After the wintry air of her snow-ridden vision for Spades, it seems that Carmen is to be a summery antidote. “It’s going to be very realistic. It’s very much of the period I wanted to set it in mid-nineteenth century Seville very much, to try and get the truth of the visual world around it with the designer Tanya [McCallin]. I wanted to capture the heat, the cold of the mountains, the sense of the society, the range of the classes of the people, the gipsy girls versus the Spanish girls, and the sense of the elements fire, water, wind, rain. I wanted to do a realistic Carmen.”

Zambello and Antonio Pappano (Royal Opera Music Director and conductor of the new production) have decided to use a version of Carmen with spoken dialogue rather than sung recitatives, and it’s clear that this is intended to make it a particularly immediate experience. “With Tony, when we first talked about doing it, we agreed that sometimes Carmen can be too long. And I think that it’s important that we’re creating a popular show. It’s three hours long: we cut a lot of it. We went back to the dialogue version for parts of the show, particularly the first two acts, because we wanted for it to be in its tradition of opra comique at the start and gradually move towards grand opera as the story becomes more serious. In a sense, we’ve created our own version using different bits.

“I don’t think that’s a problem because Bizet was a man of the theatre. Carmen was a musical when it was written. I think that was Bizet’s intention. Nowadays we have an awful division between musicals and operas, and I feel the only division should be where it’s performed. It’s still a story told through music and words, whether it’s in an opera house or in a theatre.”

Increasingly, Zambello has turned to musicals to express herself. A couple of years ago she directed Bernstein’s West Side Story on the floating lake at Bregenz, and earlier this year she joined forces with Raymond Gubbay to present Jerome Kern’s Show Boat at the Albert Hall. “I basically got frustrated with certain aspects of opera. I’ve always felt that opera isn’t accessible enough and I wanted to do things that reached a wider audience and were more populist.”

“I basically got frustrated with certain aspects of opera. I’ve always felt that opera isn’t accessible enough and I wanted to do things that reached a wider audience and were more populist.”
– On opera.

Her current projects include a musical based on Daphne du Maurier’s Rebecca, which opened recently in Vienna “I was there this weekend checking on it and it’s doing extremely well” and in the spring she starts rehearsals for Disney on Broadway’s new stage musical of The Little Mermaid. Beyond that, she’s joining up with Rachel Portman again for a musical of Little House on the Prairie, and says she’d like to bring The Little Prince onto the stage here in London “simply because I’d like to do an opera for kids! We don’t have enough repertory for children.” There’s also a further musical, based on The First Wives Club, which will keep Zambello busy for the next few years.

This week, though, the focus is entirely on Carmen. There’s a huge feminist literature on the opera, and knowing of Zambello’s feminist viewpoint I ask her how she sees the characters of Carmen and Micala. “Carmen is a contemporary woman. She’s extremely independent: she tells us from the beginning that ‘Live free or die’ is her motto and that love doesn’t mean anything. She’s quixotic, and she’s a woman who controls her own destiny: it happens to be that she’s murdered, but she drives the man to murder her. She’s a woman’s woman: most women like her and respect her because of her independent spirit. She also has the iconic sensuality, the femme fatale aspect, but I think her free spirit is the most important part of her.

“Carmen is a contemporary woman. She’s extremely independent: she tells us from the beginning that ‘Live free or die’ is her motto”
– On Carmen.

” Micala can irritate one like Don Ottavio can in Don Giovanni, but we’ve worked very hard to give her a real strong sense of purpose: an individual character, a woman driven by a mission. Norah Amsellem’s doing a great job in it. I have a great cast for this production, they’re all unique, and most of them are debuting in their roles.” Is it all coming together? She raps her fingers on the wooden table beside her and says, “So far, so good!”

With singers creating new roles for a new production, how has Zambello approached the definition of their characters? “We went back to the novel by Mrime and discussed it together. We worked a great deal on the French text of the dialogue and songs, and tried to understand the characters and their worlds. Because it’s been such an ensemble group who want to work together and think together, it’s been a great process.”

“I have a great cast for this production, they’re all unique, and most of them are debuting in their roles…So far, so good!”
– On the new cast of Carmen.

I’m curious as to what Zambello likes about working at the Royal Opera House, as she’s directed The Bartered Bride, Cyrano de Bergerac, Queen of Spades and now Carmen here since January, but she says, “This was a weird year and it’ll never happen again! Bartered Bride was a revival, which was good because it’s an opera you can bring your family to. Cyrano was a co-production with the Met, Pique Dame was the third revival and Don Giovanni‘s coming back later in the season. This won’t happen again, though, because I have no plans to come back here for the next few years. I’m focussing now on the musicals. The only new opera production I’m doing is the Ring cycle for the Washington Opera. I’ve done Rheingold already, and Walkre opens in a couple of months.”

Zambello’s production of Mozart’s Don Giovanni returns to the Royal Opera House in May 2007, with a cast including Anna Netrebko. I ask the director about her view of the piece as a woman’s opera, something that was considered by some critics as controversial when the production was new in 2002. “Well the women drive the opera. He couldn’t be what he is without women. The women make the story happen: they activate the plot, just as Don Jos activates the story of Carmen. Donna Anna activates the death of Don Giovanni, because within the first five minutes of the opera she says, ‘We will have vengeance.’ Elvira arrives and says, ‘I will have vengeance.’ Zerlina is seduced and then she says, ‘This is wrong, I will have vengeance’. So the women make the story. I wouldn’t say it’s a feminist opera, but the women are the primary energy.”

“The women make the story. I wouldn’t say it’s a feminist opera, but the women are the primary energy.”
– On Don Giovanni.

So does Zambello’s temporary departure from opera to musicals indicate that she thinks there’s no future for opera? “I think there is a future for opera, but it’s going to be tricky. On a small level I try to do my own contributions by doing, for instance, La bohme for Raymond Gubbay, where I know the ticket prices are affordable and the opera is in English. Or The Little Prince for children, or The Bartered Bride. On a bigger perspective, opera houses are of course trying to sit up and listen and do things through the Internet, the web, telecasts, plazacasts, making things more accessible.

“But ultimately it all boils down to money: we have to have money to make the ticket prices lower: it’s pretty simple. We have to create the buzz around opera that it had originally it was a populist entertainment. People were lining up to see it the way they’re lining up to see Dirty Dancing. Classics will always be there, because people want to see them people always go to see The Nutcracker! But we need to have more new operas written that are much more audience-driven, not intellectual or for critics or academic circles. We should try to reach a wide audience in terms of story line, production values, musical content, people we cast anything.”

Zambello’s irritation about the critics is well-known, and I ask her what she thinks their role should be. “The press should be much more of an advocate for the arts. Especially if they want to have a job! I think there should be more reporting and less criticism. That means much more responsible writing in terms of research. When people write a review, it should tell us a lot more about it, about what happened, how the audience responded, what it looked like. They should give us more information. Then again, they need to realise where they hurt and where they help.”

“The press should be much more of an advocate for the arts. I think there should be more reporting and less criticism. That means much more responsible writing…”
– On opera criticism.

And what’s the role of the young in opera? “Hopefully large!” she laughs. “I’d like to have a lot more operas written that are for younger audiences. I’d like to do a lot more where we reduce them down to an hour or so. I’d like to make performance times more accessible for families shows on Sundays, or matinees, or whatever will help families. We have to respect the traditional but also rethink it.”

That seems to sum up Zambello’s mission: adapting the best of the old to the realities of modern life. “Ultimately, what interests me most is to bring quality live music theatre to the widest audience possible. That’s my ambition.”