by Melanie Eskenazi
published: 30 May 2012 in Classical and Opera Features
Tweet 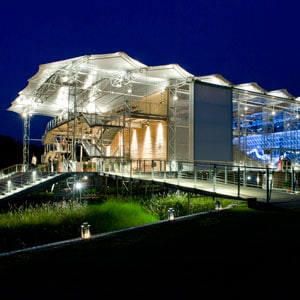 Rivalling Glyndebourne in beauty and in style, the Getty family estate at Wormsley, with the wonderful new pavilion giving spectacular views across the Chilterns, is only an hour’s drive from London and a mere 25 minutes on the train from Marylebone – there’s a dedicated bus service to whisk you to the estate. You can enjoy the grounds from 16.00 onwards – curtain up is at 17.50 for Don Giovanni and 18.05 for the other productions, and you can picnic in style by the lake, overlooking the cricket ground and in the pavilions, or you can partake of yummy suppers created by Jamie Oliver.

Well, that was the vital stuff – now what about the operas? They are, in a word, enticing. The season kicks off on Saturday 2nd, with Don Giovanni featuring the very promising Grant Doyle in his UK role debut as the Don; if you saw his ETO Barber of Seville Figaro you’ll know he has both the voice and the physique du role. This production is also remarkable for the casting of the Bevan sisters, Sophie and Mary, as Elvira and Zerlina respectively.

Follow that, as they say. Nothing daunted, Garsington embarks on Vivaldi’s rarely seen L’Olimpiade on Sunday 3rd – appropriately in this Olympic year, it’s a tale of rivals in sport and of course in love, and its major draws will be that it’s conducted by Laurence Cummings, who has never so far as I know been responsible for a single dull note, and it features two marvellous counter-tenors, the sweetly mellifluous Tim Mead, fairly well known to Glyndebourne audiences via his very fine Eustazio in Rinaldo, and the controversial American Michael Miniaci, whom some specialists, or purists, might prefer to call a male soprano. Whatever – these are two great voices, worth rushing to hear.

Finally, Offenbach’s La Périchole opens on June 18th with another worth-the-journey cast: the soprano lead is the rising Naomi O’Connell, Piquillo is sung by Robert Murray, who is well established at both ENO and the ROH, and the wonderful mezzo Diana Montague is sure to steal the show with her Berginella. It’s Offenbach, so expect froth, frivolity and fun – the perfect way to end what looks like a fantastic season.

If you’re lucky enough to live in or be able to get to Skegness, you can be part of an amazing ‘First’ – a live screening to a beach in the UK, when La Périchole will be shown as part of the SO Festival on July 1st. The performance will be broadcast at 19.45 to a big screen, it’s free, and it will be preceded by all kinds of entertainment and followed by a spectacular beach fireworks display. Families are positively encouraged, and local fish and chips, ice creams and other refreshments will be available. Sounds great!

Further details of the Garsington season can be found at garsingtonopera.org