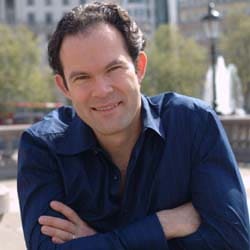 Slightly late for our meeting, Gerald Finley found himself winding through the labyrinthine corridors in the depths of the Royal Opera House. He says it reminds him of his opening line in Pellas et Mlisande, which he’s here to rehearse: “I can’t find my way out of this forest”.

I sense that lateness is not characteristic of Finley, although he does come to this production some time after his co-stars, having had to drop out of the Salzburg run because of illness.

Now that he’s caught up with Stanislas Nordey’s production, he finds himself part of an extraordinarily talented team, which includes Angelika Kirchschlager, Simon Keenlyside and a certain Simon Rattle. He’s clearly excited about the forthcoming performances and talks articulately about Debussy’s enigmatic work and his character, the love-lorn Golaud. It is one of a series of tormented men he’s played, and at which he excels, from Eugene Onegin, J Robert Oppenheimer, Owen Wingrave and perhaps surprisingly Mozart’s Conte in David McVicar’s interpretation of Le nozze di Figaro last season.

He describes the production of Pellas as a fabled, storybook presentation, going as far as to have sets that open up and visually reveal themes. He prefers to see the costumes as “Elizabethan-style” rather than as clown outfits, which is how they have been described disparagingly by some critics. “They do make moving on stage not looking like a duck quite challenging”, he admits.

He sees Golaud, the prince who finds but never quite gains his princess, as a man who is lost and who never manages to satisfy his need for power and control. “He’s desperate to find something that makes sense. He doesn’t understand love; for him, it’s more of a behavioural state, rather than any revelation of himself. We want to expose him as someone who’s very emotionally locked, unable to give or receive. It’s a very contemporary issue.”

“Debussy was looking for something that was half sung, half declaimed. We have our work cut out with that.”

“Delivering the French is very challenging too. Debussy was looking for something that was half sung, half declaimed. We have our work cut out with that. The writing’s extraordinary though. Simon (Rattle) was working on Wagner before doing this and he strongly brings out the leitmotivs which are vital to the music.”

He sees his role in Figaro as similar to Golaud in some respects. “We saw him as somebody who felt that power belongs to him and he can’t bear his status being undermined. We explored that quite fundamentally. He ruled, not by terror exactly, but with firm consequences if anyone stepped out of line. It’s a form of tyranny.” His performance certainly brought out a dark side of the character, one who lashed out physically at his wife when she wasn’t in line with his wishes.

A tyrannised character Finley has played memorably in the past is Britten’s Owen Wingrave, which he did onstage at Glyndebourne and also on film. He is generous in his praise of the Royal Opera’s current production in the Linbury Studio. He coached Jacques Imbrailo in the role and is full of admiration for the young singer’s performance.

For such a nice man, he does nasty very well.

Britten is a composer Finley has been closely associated with. As a young singer, he shone in the part of the English Clerk in Glyndebourne’s Death in Venice and he is now lined-up to play the multiple baritone roles in the opera at Vienna in a couple of years time, when his Aschenbach will be Michael Schade. It’s something he’s coveted for some time and he relishes the malevolence of the part. For such a nice man, he does nasty very well.

Next year, he’ll be playing Balstrode in English National Opera’s new production of Peter Grimes but feels that Billy Budd is now “slipping into the distance”. It was on the cards at one point but now has “got away”. With a Glyndebourne Albert Herring behind him (he played Sid of Sid and Nancy fame), he’s done most of the major Britten baritone roles.

Another British composer that Finley has an affinity with is Mark Anthony Turnage, a close friend who has written a number of works for him. He starred in the composer’s The Silver Tassie (at ENO in 2000) and there was an immediate bond between the two artists. Finley seems to suit Turnage’s writing in a similar way that Pears did Britten’s; it’s a perfect match of voice and music. Turnage’s When I Woke, three settings of poems by Dylan Thomas, which Finley premiered in London a couple of years ago, begins with the unaccompanied voice and, although not written for the singer, is a fine example of this. He describes Turnage’s writing as “exuberant, pulsating, buoyant, with so much variety. What I love about Mark’s music is the hidden element of dance. Mark’s very at ease with himself and that’s reflected in the music.”

Finley has had a great success recently in San Francisco with the work of another contemporary composer: John Adams’ Doctor Atomic. It plays in a number of cities over the coming year, beginning with Amsterdam in June and should be arriving at the London Coliseum in 2009. He describes the orchestrations as “extraordinary. It thunders from the beginning. Quite remarkable.”

Doctor Atomic deals with the scientist J Robert Oppenheimer who developed the atom bomb. Finley seems to see his art as something more than just bourgeois entertainment and tackling huge subjects like this as fit material for opera. “The character is tortured, a complex man having to make hugely difficult human and moral decisions. He can be seen as a sort of American Faust. He had his own personal traumas and it’s set against an incredibly important turning point of human history.”

Finley sees the concert hall as an “absolutely essential” part of his career. He tours annually and gives regular performances at the Wigmore Hall, often with the pianist Julius Drake. “The intimacy of recital makes you much more vulnerable. I love the experience of creating narrative, even if it’s a group of songs rather than a coherent whole”. He has given Schumann’s Dichterliebe recently and has also performed Schubert’s Winterreise, though sadly not in London. He would like to do it more often but says he is not keen just to “fit it in”.

“I don’t want to just slot it in, because it’s such a personal journey and it can be devastating, both for audience and performer. I haven’t done Die Schne Mllerin yet but it’s not far away.” He has recordings coming out soon, a second volume of Ives songs and also a Barber album, which will probably be supported by live recitals. He’s also tackling some Tchaikovsky and Mussorgsky songs, including Songs and Dances of Death and has been talking to the conductor Mark Elder recently about doing some Vaughan Williams and Delius.

As far as stage work is concerned, he talks about the possibility of new French and Russian repertoire and maybe some of the middle-range Verdi roles. He’s even keen to do some Wagner, mentioning Tannhuser, perhaps Amfortas in Parsifal and even “something in The Ring“.

Gerald Finley’s appetite for tackling works new to him seems enormous and admirers look set for an exciting future with many varied roles over the coming years. Pellas et Mlisande opens on 11 May and plays for just six performances through to 23 May. Finley will return to the Royal Opera House next March in Tchaikovsky’s Eugene Onegin.