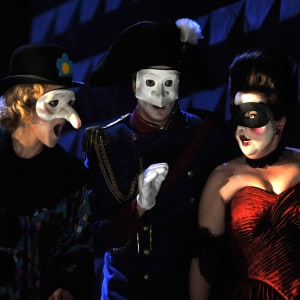 Glyndebourne’s 2014 season commemorates 80 years of the opera house on the South Downs with six covetable productions. So which ones fall into the ‘must see’ and which into the ‘maybe, if I can get a ticket at the last moment’ categories? For some of us, all six are compulsory – but if you have to ration your visits, there are definitely four which qualify as unmissable.

First up is the opening night on May 17th: a new Rosenkavalier directed by Richard Jones and with Robin Ticciati conducting the LPO in his inaugural production as Glyndebourne’s new Music Director; Kate Royal will make her role debut as the Marschallin. There are 13 performances from May 17th-July 3rd.

The very next day, Graham Vick’s beautiful, faithful version of Eugene Onegin opens, with Andrei Bondarenko and Ekaterina Scherbachenko as Onegin and Tatyana (they were the Marcello and Mimi in the 2012 La Bohème). If you were less than enchanted with the recent ROH production of this much-loved work, then you will be consoled by this one – and there are 15 chances to see it, from May 18th-July 11th.

The season’s second new production is sure to be in great demand; Glyndebourne’s first-ever staging of Mozart’s La finta giardinera has an ideal cast led by Wolfgang Ablinger-Sperrhacke as Don Anchise and Christiane Karg as Sandrina. Robin Ticciati conducts the Orchestra of the Age of Enlightenment, and there are 15 performances from June 28th-August 21st. The 2014 season comes to a close with a welcome revival of Robert Carsen’s thrilling production of Handel’s Rinaldo, this time featuring the star countertenor  Iestyn Davies in the title role; only seven performances from August 9th-24th.

As well as these ‘must-see’ events, there will be a new La traviata, directed by Tom Cairns and with Mark Elder conducting the LPO; Venera Gimadieva will make her Glyndebourne debut as Violetta.  Jonathan Kent’s 2011 Don Giovanni opens on June 7th, with 13 more performances until August 1st, and will be eagerly anticipated for Elliot Madore’s Don; if you heard him in his UK debut as Ramiro in Glyndebourne’s 2012 L’heure espagnole, you’ll know why. Come to think of it, these two are ‘must sees’ as well… booking opens on March 10th, prices go from £10 to £250, and of course there are those glorious gardens, picnics, restaurants, Pimms, talks, study days, recitals… mustn’t get carried away.

More on Glyndebourne Festival Opera can be found at glyndebourne.com