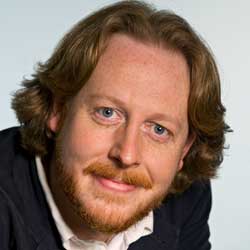 ENO brings its eagerly-awaited new production of Don Giovanni to the London Coliseum on Saturday November 6th; although it may not prove to be quite so controversial as the Calixto Bieto version, it’s safe to assume that Rufus Norris, making his operatic directorial debut, will be able to both surprise and delight us.

ENO have been very canny in their choice of singer for the title part; the whole cast is uniformly excellent, but it is Iain Paterson’s Don which will surely be the talk of the town. This personable young man might well be called the bass-baritone of the moment; not only has he scored recent huge successes in Wagner at the Met and the Paris operas, but he created what the present writer called the finest interpretation of Redburn in Billy Budd at Glyndebourne, and stole the show just last month at ENO in Faust, where his Mephistopheles was described by our critic as witheringly self-assured and roguishly loveable all at once. That sounds like the ideal combination for the devilish Don, as I discovered when I talked to Iain Paterson during a break from rehearsals.

“There’s nothing really too shocking,” he chuckled, “No Kalashnikovs or toilets or anything like that, just telling the story of the relationships between the characters.” He described the set as fluid, and the take on his character as emphasizing the magnetic aspects of Giovanni, especially the way in which he electrifies the lives of all the other characters. “Rufus is keen to explore the notion of the quest for new experiences – this Don is not just a seducer but someone always in search of what might be around the corner.”

As with the production of Faust, Iain has been working with a theatre director new to opera, but he does not subscribe to the view that this is a disadvantage. “It was quite a surprise to me that in their different ways they were each so on the ball as far as opera is concerned – I think that these days a director is a director, and that’s it. Maybe opera directors know more of the craft to begin with, in terms of what can reasonably be expected of singers, but theatre directors are stage animals too and they get switched on remarkably quickly – this is especially true of Rufus, who has been a joy to work with.”

Iain’s success in Billy Budd is something he attributes firmly to another theatre director, Michael Grandage. “His idea was that in making the officers take on the drumhead court-martial, everyone’s careers were being put on the line, and the production really emphasised the intensity of that for my character.”

Coming on to the conductor of Don Giovanni, the dynamic young Russian Kirill Karabits is making his London operatic debut. Iain clearly got on well with him and promises “…musical and dramatic surprises, though nothing too troubling I hope – it all falls into place, and you’ll see and hear that there’s much more humour in this production than most others. Owing to the nature of the set, we have a crew of what Rufus calls ‘Watchers’ who contribute much more to the action than just scene-shifters.”

Iain’s third role in this ENO season will be Amfortas, a very different prospect to Mozart’s Don, and one which will cement his reputation in the great Wagner roles as well as confirming his versatility. “Parsifal is set to have a more relaxed schedule than the other operas, since we opened with Faust on the Saturday night, and on Monday morning I began rehearsals for Don Giovanni. This weekend was my first consecutive days off in nearly three months.” This does not seem to faze him, however. “These three parts were all talked about for some time and its just one of those things that they all came up in the same year.”

Iain Paterson began his musical life as a violinist; he auditioned for the RSAMD with voice as his second study, and was taken on as a voice student, “…which is a damning indictment of my abilities as a string player.” Ironically, he says that his violin teacher always used to ask him how he would sing a phrase – “…and now I work the other way around, thinking how I would play a phrase to achieve a cantabile line.”

Modestly, he attributes a great deal of his success to luck, such as standing in for Clive Bayley as Biterolf, when Bayley’s wife went into labour, and also to having great mentors such as Norman Bailey and John Tomlinson. He had Norman “all to myself” when both were engaged at Opera North and he used to drive him home, and Iain’s admiration for Tomlinson is evident when he recalls singing with him and “…not quite being able to believe that I’m on the same stage.”

I mention that he is young to be singing Amfortas, but he replies “My hero, George London, made his Bayreuth debut in the part at 31, so there’s precedent for a youthful one! Anyway, I’m wary of assigning age groups to roles – Giuseppe Taddei for example did Falstaff in his twenties and in his sixties, and they are equally great performances.” With Hans Sachs and Wotan, he feels that a singer needs not so much age but experience and stamina to get through them.

It is his ambition to follow his mentors in terms of becoming established not just as a Wagnerian but as a versatile singer who can take on a variety of roles. I mentioned that I hear Mandryka in his voice, at which he looks aghast; “It’s a terrifying role for any baritone, but certainly falls into the challenge category, especially the second act!” He is more interested in singing Barak one day, “…because of its staggeringly beautiful music” and he will cut his teeth as a Strauss baritone when he takes on Jochanaan at the Salzburg Festival.

ENO is clearly very important to him; he was part of its Young Singers programme before becoming a company principal, so it’s fitting that he should be cast in so prominent a role this season. Whatever the stage distractions in terms of overture visualization and supernumeraries, I’m sure that I, like the rest of the audience, will be spellbound by Iain’s singing on Saturday night.