by Melanie Eskenazi
published: 30 May 2015 in Classical and Opera Features
Tweet 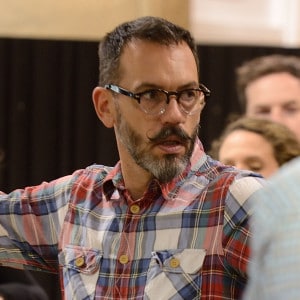 Next Saturday, June 6th, Garsington Opera at Wormsley unveils its new production of Richard Strauss’ Intermezzo, an eagerly anticipated outing for this too-rarely performed work. It’s directed by Bruno Ravella, whose guiding hand has been behind many revivals of the kind which have you saying “This is so much sharper than the first time!” – Glyndebourne’s 2014 Rinaldo being a case in point, so it will be exciting to see a production that will be entirely ‘his.’

We caught up with Bruno during rehearsals last week, and asked him about the production and his career.

OMH You have worked with a great range of the prominent opera directors: would you say that any of them have influenced you more than others?

BR I am lucky to have worked with directors I admire greatly. The four things I always come back to are the detailing and craft of meaningful blocking from John Cox, the powerful and clear story telling from David McVicar, the poetry and regular ‘surprises’ from Robert Carsen, and the relentless pursuit of interesting perspectives from Barrie Kosky.

OMH Are there significant differences between preparing for this festival, and the others with which you’ve been involved?

BR There are indeed. The auditorium in Wormsley has no fly tower, no wings to speak of, no house curtain, and natural light until late in the performance. Being Associate Director on Fidelio last season gave me a chance to spend time in the space and ‘experience’ it. I know what I like about it and the types of sets I like to see in it.

Intermezzo is a demanding piece in this context because of the constant scene changes. 60% of it takes place somewhere in the couple’s house. The rest is in varied locations such as a toboggan run, a ball at a local inn, a room in the Notary’s house, or Vienna. Intermezzo is also a domestic piece and I wanted an intimate setting that helped the delivery of the text. Giles Cadle, my designer, had to come up with a solution that was meaningful yet flexible, and where scene changes didn’t distract from the glorious musical interludes. We can’t rely on lighting to create spaces or moods so the set has to work harder, combined with the audience’s imagination.

OMH Intermezzo was first performed with sets which imitated the composer’s house, and that’s the only style in which I’ve seen it. Will this be a ‘traditional’ production, or, given the very particular circumstances of the stage at Wormsley, will you be opting for something different?

BR I’ve mentioned some of the specifics of the Wormsley stage, and the practical demands of the piece. Richard Strauss called it a “bourgeois comedy with musical interludes”. It really is a play in music, and I don’t think it is right to move away from a naturalistic approach, however much I thought I may have been able to when I first looked at the piece. The ‘house’ settings are also incredibly specific, with actions in the text that have to take place in one or another room of a house. If ‘traditional’ means having rooms and telling the story, then yes, I guess it will be! We are not replicating Garmisch and I’ve tried to take it a little further. The house represents for me the ‘home’ the couple has built together. It is the physical representation of the marriage.

Beyond the setting I’ve taken a few liberties that I trust help give weight to all characters, developing for example the role of their son.

OMH In the ‘toboggan’ scene, will you be making use of the ‘outdoor’ setting of the opera house at Wormsley?

BR Ah, the toboggan scene! We did consider this at an early stage but decided against it in the end to focus this very short scene. The outdoor setting is not visible from every seat and could lead to frustrations…

OMH The waltz scene is probably one of the best known parts of the opera, but without a curtain for this ‘scene change music’, how do you manage it on this stage?

BR You’ve pinpointed one of the tricky moments for me. It is written as scene change music indeed, and the curtain frames five minutes of an evening at a ball in the local inn. With no curtain I’ve had to add a sense of time to the scene. I don’t have extras apart from four dancers and illustrating the frenzy of the waltz, especially after the duet, with just a few couples is difficult. I’m choreographing the dances too and I’ve had to spend a fair amount of time working this scene out to make it exciting and fun – not forgetting I’ve had to learn schuhplattler…

OMH The Skat game is surely a very challenging part of the opera for a director; can you say a little about how you have managed it?

BR The Skat scene is fun but almost drove me mad. I had to start by learning the rules of the game. Luckily my youth was spent playing a Bridge version of Belote, which has helped a lot. Richard Strauss gives no indication as to who is sitting next to whom, who plays, who deals etc. All he gives us is who deals first (the legal counsellor). After that, I had to work out from the clues in the text who is sitting next to whom and so on. It felt like a treasure hunt.

I’ve aimed for naturalistic and accurate play. This took a long time to block as some hands take time, others are short and the singers feel the pressure of having to play fast whilst still delivering the lines casually in order to get to a specific moment in the music when a game related moment comes up. I started by spending an hour teaching the rules of the game to the singers, including how to shuffle for some of them, cut, etc. Then the exact choreography of the game that I worked out had to be taught. The dealer in each round doesn’t play, which allowed me to have some flexibility there, with singers able to get up and move during the game. Then I repeated it and repeated it ad nauseam so the blocking becomes second nature.

OMH I’ve always thought of Christine as a sort of combination of the Ariadne Prima Donna, and the Marschallin. Do you think it’s possible to present her as a mainly sympathetic character?

BR Absolutely! And what a lovely description. The first person I mentioned Intermezzo to said to me “it’s the one about that horrible woman”. I couldn’t disagree more – It’s anything but. I love Christine. She is fascinating. I have specific moments in the piece when I show her naked, so to speak, when alone. Not playing games or acting. Only Robert/Richard really knows her and understands her. I want the audience to get what it’s like being the wife of a famous composer who is rarely home, at a time when she is only defined by her husband: “Frau Hofkapellmeister Robert Storch”. I think the fragility and vulnerability under the mask will come through clearly, and Mary Dunleavy our Christine plays her beautifully.

OMH Many of our readers will not be as familiar with Intermezzo as they are with, say, Rosenkavalier or Arabella. What would you say are its special qualities?

BR Intermezzo has a fantastic libretto written by Richard Strauss himself. Everyone knows about the autobiographical element of it, but it is more than that – very well constructed, both funny and touching, and very entertaining.

Richard Strauss wrote a very interesting foreword to the printed edition where he describes what he wanted to achieve, the naturalness of the speech, the realism and modernity of the situations (he uses a telephone, telegrams, divorce, tobogganing…). We are very far from the traditional operatic love story – no Tristan and Isolde dying for love.

The comedy scenes are very funny and entertaining followed immediately by terribly poignant and moving scenes.

The music is fantastic – there are roughly three lyrical moments in the whole piece. At the end of the fifth scene of Act I when Christine gets lonely and misses her husband, the end of Act I with Bubbi her son, and the end of Act II with the reconciliation. The rest is very clever and entertaining communication, with superb intermezzi. You mentioned the waltz – the one after scene 5 when Christine longs for her husband is my favourite. Amazing music. And the end! As good as any duet Strauss has written, with the music building and building to the emotional climax.

OMH You based yourself in London very early on in your career; what made you choose it over other prominent musical centres such as Paris or New York?

BR I was in Aberystwyth for a couple of terms as part of my studies and decided to return to Britain as soon as I graduated. I made London my home then and can’t quite see where else I’d like to live! Culturally it has everything one wants, and I love the quality of life.

OMH After Intermezzo, what is coming up next for you? Will we see a production at the ROH?

BR I’m going straight to Switzerland to direct Traviata for the Moutier Festival (I directed Giulio Cesare there a couple of years ago). Then back here for Agrippina with Iford Arts (my third production for them). No ROH yet, but some fantastic projects being discussed for the near future!

More details and booking information for Intermezzo can be found here: garsingtonopera.org/our-season/intermezzo