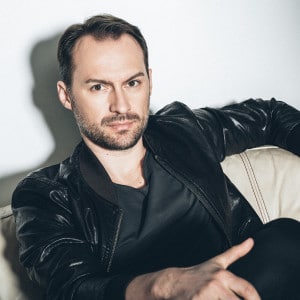 The Lithuanian tenor Edgaras Montvidas sings Belmonte in Glyndebourne’s new production of Die Entführung aus dem Serail, which opens this weekend. He found time to answer a few questions in the midst of rehearsals…

OMH: Your Lensky at last year’s Glyndebourne Festival was much admired so your Belmonte will be eagerly anticipated! Can you say a little about what it’s like to prepare a role at Glyndebourne, and how it is different to other venues?

EM: First of all I’d like to say that Glyndebourne is one of most amazing places in which to work, its location, its nature, and moreover its incredible music staff and stage management professionalism attract so many of us to come here. Every time I’m here I feel like I’m on an island of the arts where nothing else exists, your troubles are far away and you can immerse yourself entirely in opera!

This is my fourth time in Glyndebourne (I did Alfredo with GTO, a few years later I jumped in as Lensky, then was re-invited to perform this role again last year and now I’m Belmonte) and I was very fortunate to work with such directors as Graham Vick and David McVicar. Normally we have up to six weeks of rehearsals, so that’s enough to dig deep into the character, find every possible angle to tell the story… Nowadays it’s a luxury to have this timeframe.

OMH: Belmonte is an exceptionally demanding role, longer than most of the other great tenor parts and requiring much more in the way of combining acting with singing than, say, Don Ottavio. What would you say is the secret to ‘surviving’ it?

EM: I like being on stage more than sitting in my dressing room, I think I’m more of a ‘long distance runner’, so it’s perfect for me. This must be my seventh production of Entführung, I’ve sung Belmonte in Frankfurt, Munich, Berlin and Hamburg, as well as Amsterdam and Trieste… It is indeed a long evening for a tenor, this part sits quite high and requires soft singing but at the same time a ‘meaty’ voice as well as doing a lot of running about, so the comparison with a long distance athlete is not far off the mark.

OMH: Some tenors feel that Belmonte needs rescuing from dullness. Do you have sympathy for this view?

EM: I don’t think Belmonte needs rescuing, in general I think that every singer should be eager to find an interesting angle to portray its character, to be interesting on stage, to give it life and blood!

There’s never a two-dimensional character – good or bad. No character is this black or white – there are always so many shades.

OMH: You have worked with many diverse directors, including Graham Vick for Eugene Onegin and now David McVicar for Entführung. Have any of them in particular influenced you?

EM: They both are so different, their temperament, work style, and yet they both have this enormous respect for music with the ability to tell the story elegantly and touchingly.

OMH: You received much praise for your Tom Rakewell in The Rake’s Progress, also with McVicar. Do you have any plans to take on other roles sung in English, possibly some Britten?

EM: If I’m offered them and if it suits my voice, then yes, very much so!

OMH: What is your view of Regietheater? Do you think that the roles of the director and singer have sometimes become unbalanced in favour of the former?

EM: I can instantly sense if a director is short of ideas and when the only task and purpose is to shock the audience. Be it Regietheater or a traditional approach I don’t mind, as long as I believe in the director and the path he or she is showing to me. I’ve sung in some very controversial productions even where the audience was literally standing up and leaving the auditorium. ‘Cheap’ routes to success – lack of fantasy or of musical intuition – that’s what worries me most. On the other hand, opera is not a museum relic and shouldn’t smell of moth balls!

OMH: Do you think that it’s reasonable to take a singer’s appearance into consideration when assessing performance?

EM: I was closely following discussions on the social media sparked after Glyndebourne’s Rosenkavalier last year and I should say, I’m not entirely supportive of some singers’ comments that opera is all about singers and singing. An amazing thing about opera is that of the synthesis of so many forms of art – visual, dance, music, is theatre! The expectation that audiences want to be transferred into this other world, to be able to believe in what is happening on stage, is true! Of course, it’s an advantage to be tall and slim, but I think the success lies not in one’s size but in one’s ability to act, the ability to make an audience cry or laugh, love or hate. The rest I leave to a costume designer! 🙂

OMH: As yet, you have concentrated mainly on the operatic stage. Do you have plans to develop your concert and recital work?

EM: I do love recitals, however it consumes a lot of time to prepare a new programme – I call it an x-ray of a singer’s soul… Right now, I don’t have much time for recitals, but when I do, I work with Simon Lepper or David Gowland who I met when I was on the Young Artist Programme at Covent Garden all those years ago.

I’m quite active on the concert stage though, I just sang the Shepherd in King Roger with the Boston Symphony and Charles Dutoit (with whom I’ve sung the Fisherman in Le Rossignol, both in Boston and Tokyo). I also work closely with Palazzetto Bru Zane on these exciting operas I never heard of – it’s so amazing to make first ever recordings of these forgotten French operas! This year I recorded Les Barbares by Saint-Saëns and next year I’m recording Godard’s Dante. Next season I have a lot of concerts in Paris, Moscow and Munich.

OMH: You are known mainly as an exponent of the great lyric parts – Lensky, Werther… – do you aspire to take on the ‘heavier’ roles, such as the Puccini tenor parts?

EM: I’m thinking ahead and choosing my rep very carefully, I’m not easily seduced by a quick and short fame, I want to sing for a long time, therefore I want to be friends with Mr Mozart as long as I can! I know what I can do with my voice and what I can’t. I know my advantages and I use them! Of course it’s necessary to stretch one’s abilities, now I’m 40 and I have greater control of my instrument. I think Hofmann at Berlin Komische in October will give me an opportunity to see how I feel in the ‘heavier fach’ and perhaps it will show me some new directions.

OMH: Are there any great tenors, either past or present, who have been particular influences for you?

EM: I was so lucky to not only meet but also learn from some greatest singers of all times – Pavarotti, Domingo and Leiferkus. I grew up listening to Nicolai Gedda and Philip Langridge recordings. I had a fantastic teacher back in Lithuania – whose advice I still value very much – Virgilijus Noreika (who also taught Sergey Larin).

OMH: After Glyndebourne, what is next for you in terms of operatic roles?

EM: Right after my last performance here in Glyndebourne and then BBC Proms, I will go to the Komische Oper Berlin to work on my first Hofmann in a new Barrie Kosky production!