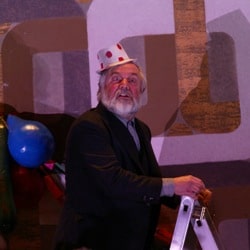 The leading Wotan of his generation, John Tomlinson has sung at Bayreuth every year since 1988 and has appeared regularly at the two London opera houses since the 1970s. The Lancastrian bass is something of a national treasure, remaining a consistently dramatic and vocally rigorous singer during his long career.I caught up with him over lunch, during rehearsals for the Royal Opera’s first revival of Richard Jones’ production of Shostakovich’s Lady Macbeth. It was an enormous hit on its first outing in April 2004, winning many awards, and is sure to provide another smash success this time around.

The backbone of Tomlinson’s career is the Wagner repertoire he sings roles in all ten of the canonic Wagner operas, and no year of his diary is without a generous smattering of the controversial German composer’s works. What keeps bringing him back to Wagner, though? “Well, a lot of things to do with opera come down to what your voice is suited to. I think what I’m really good at vocally, and mentally, and from an acting point of view, is Wagner. It’s my world, psychologically and dramatically. That’s important because worldwide, there aren’t many people that can sing Wotan and Hans Sachs to the highest level, so it’s important that the gifts that you have match the demands of the part.

“But also, of course I love the music and the operas, and Wagner was a great musical genius – everybody acknowledges that, whatever people think about what he said as a man. It bothers me if somebody is anti-Semitic of course it bothers me but Wagner was of a time when it was fashionable amongst some people to be antisemitic, appalling though that is. There is of course no antisemitism in the operas, and if there were, I wouldn’t be a part of them. People say that Beckmesser [in Die Meistersinger] is a Jewish character, but I don’t really believe that. To me, Beckmesser is a very clear image of a man who lives by rules as opposed to creativity and art. He’s rule-bound. And he’s an incredibly clever man who’s computer-literate and everything is rigorously set down. That is, of course, a dead-end, though you do have to have some rules. Beckmesser is only half the picture the rules without the creativity. That’s what he is to me he’s not a Jewish character.

“There’s a 50 year gap between Wagner and Hitler, which people often don’t realise. His music was abused by the authorities in the Third Reich, which was a great shame. But his works are of such genius that to me, that’s not really a problem. It’s an unfortunate thing, but I’m still happy to be involved with them.”

Tomlinson performs the role of Boris Ismailov in Lady Macbeth of Mtsensk from September 30 at the Royal Opera. Boris is one of the most vile characters in all opera, abusing his daughter-in-law and generally making life unpleasant for those around him. What makes a singer want to play such a character?

“I don’t know!’ he laughs. “You can’t completely choose the roles that you do, because you’re bound by the talents that you have. The nearest I come to playing the juvenile lead is The Flying Dutchman, where I have a love duet, which is a great for me. It’s also the title role, so that’s also a treat the number of times the bass gets the title role and sings a love duet with the soprano is extremely rare! The bass voice is usually used by composers for great dignity in the form of priests or kings, or malice in the form of assassins. So one must live with that. That’s the reason why I’ve gravitated towards parts like Wotan, Gurnemanz, Hans Sachs and Boris Godunov these are better than the average bass part. They’re magnificent roles, vocally and dramatically.

“My voice suits some of these malevolent parts, so I’m happy to sing them. It’s often said that when you perform them, you don’t think of them as malevolent. You believe in the character and you make him convincing. You’re playing a person who has his motives for doing these things. You get nowhere by saying ‘that’s a bad guy, I’m not singing him’. You imagine the life that this guy had and find what has brought him to behave in this way.

“Boris in Lady Macbeth is completely unredeemable. His only redeeming feature is what people say about him that they admire his vigour and life force. The fact that he desires Katerina sexually and beats the hell out of Sergey is very brutal, but there’s something admirable about the sheer energy of the guy.”

Having played the role when the production was new, Sir John is uniquely positioned to comment on what the director, Richard Jones, and conductor, Antonio Pappano, bring to the opera. “Richard’s a wonderful director. We did the Ring together here in the 1990s, and we had a great time with that I’ve got the greatest admiration for him. He is wonderfully matched to Lady Macbeth in particular because it’s got a great black comedy to it. The events are horrific, but there is a grotesqueness and absurdness about it. It’s a mixture of death and hilarity. That’s inherent in the piece my death, for instance, is the cause of great celebration. But Richard reinforces that, and that’s his world: a delight in theatricality alongside the macabre. That’s what he brings to it.

“Tony [Pappano] and I first worked together in 1988. He was Barenboim’s assistant in Bayreuth when I was doing Wotan in the wonderful Harry Kupfer production. That’s now eighteen years ago, and he was wonderful he worked incredibly hard and contributed strongly to the work we were doing. And when he took over the orchestra, it was obvious that there was great talent there. So I’ve known him a long time, and I think he’s come into his own in this job here.

“I think he conducts Lady Macbeth. brilliantly. It’s got great beauty to it, haunting beauty. And at the other extreme, it’s got incredible energy and power, and motor-like rhythms. He takes all of those things a step further than an ordinary conductor might. The haunting beauty is more hauntingly beautiful. Added to that, he’s wonderful to work with. He’s extremely demanding of course it would be easier to work with someone less demanding, but that would also be less satisfying. He doesn’t tolerate averageness easily! So that’s quite hard work.

“But it’s rare to have a conductor that understands the voice. He played for his dad, who was a singing teacher so his understanding of the voice is phenomenal, better than any conductor that I’ve worked with. He himself comes out with a top B natural every so often! He was singing a bit this morning he understands vocal technique. That is not easy because all the apparatus – lungs, abdominals, vocal chords, resonators is all hidden, unlike the wrist and elbow of a string player, which you can see. That’s why it’s so hard to learn how to sing you’re dependant on a singing teacher to tell you what to do.

“I was talking to a chap on the train yesterday, and like many people he doesn’t realise that opera singers don’t use microphones! I would say that’s the main misunderstanding in the country about opera. People cannot imagine that singer can stand on a stage with an orchestra of a hundred and an audience of a couple of thousand and communicate effectively. When I tell them, they don’t believe it! Yet it’s at the heart of the experience and of opera singing technique.”

Tomlinson reveals that for Lady Macbeth, “We have a very good Russian coach, but most of us have sung Russian quite a lot, and I read the Cyrillic, which makes a big difference. It’s a wonderful language to sing. We’re all getting on famously we have a new Katerina, Eva-Maria Westbroek, who is absolutely wonderful. You’ll enjoy her. She has a stunning voice, and she’s also very sexy. Chris Ventris has done the part of Sergey a lot, so I’ve known him a long time. John Daszak has come in, he’s new, but we just did Moses and Aaron together in Munich. It’s on the front page of the Opera magazine, with us looking identical!”

When we come to discuss the future of opera, Sir John is cautiously optimistic. “Most people that come and see an opera are absolutely ravished by the experience. The people I speak to on the street may say, ‘Oh yes, I went to see an opera about three years ago and it was fantastic!’. They may not remember what it was, but basically they enjoyed the experience. Globally, I’m optimistic. In this country, one worries about the popular movement, which is so strong that opera could be left behind. The populism is gathering pace and now people have only heard of Robbie Williams or something and probably haven’t heard of someone like Colin Davis. That’s getting increasingly the case, and it’s worrying. The popular press have whipped up this idea that opera is for the toffs that’s all come back in the last ten years. I think affectionately of the 70s and 80s, when opera was going more in the direction of music theatre, the houses were fuller and fuller, and it was more at the cutting edge a serious art form that was going somewhere and was valid. Then almost at a stroke, in the ’90s the perception of opera that people have started going backwards. I’m not talking about opera as it is, but the way people see it.

“But globally, one is far more optimistic. Germany has some economic problems, but opera is such an established tradition there. There are more performances in Germany on any particular night than the rest of the world put together, I would guess. There are probably 50 performances of opera, and in many other parts of the world too. Even in China, opera is the new thing! In Japan, they’re building opera houses too. Another huge change since the Berlin Wall came down is an influx of singers from the East. It’s hard to imagine how it used to be there were a couple of singers that were able to come from East to West (Theo Adam, Peter Schreier) but now there are many talented singers from Eastern Europe who are very successful in Western Europe. So the world has changed very much.”

As the conversation draws to a close, I ask Sir John what he would like to be remembered for. He laughs, and says “Well, for the work that I’ve done. Probably the hallmark of the work that I’ve done is a very single-minded attempt to portray the parts that I play, particularly Wotan, Hans Sachs and Boris Godunov. I hope that I’ve contributed to the great art form of opera, in that I’ve given a lot of performances of these parts and I’ve hopefully given a lot of pleasure and insight to those things. I hope that someone will be drinking a pint somewhere in twenty years’ time somewhere and saying Oh, John Tomlinson’s Boris, that was quite something!’ Singing-acting is to me important. I’m very Wagnerian in that sense too – the Gesamtkunstwerk. The way you sing a phrase is influenced by the way you are playing the character at that moment. The reason the orchestra plays those chords expresses something that’s going on in the character dramatically. Everything you sing has to do with the whole dramatic-theatrical process, and I can’t really imagine singing without that. Even if I do a Lieder recital, which doesn’t happen very often, it’s still like an operatic performance for me. Mentally, I’m telling a story and everything has dramatic significance. I’m very much dedicated to that and that’s what I’ve tried to do.”