by musicOMH
published: 1 Jan 2008 in Classical and Opera Features
Tweet 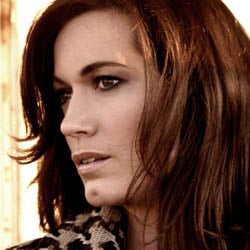 Formal rehearsals for the next job haven’t started yet, so I arrange to meet Kate Royal at her house in Dulwich.

It saves a trip into the centre of town where, she says, she might have been tempted to hit the shops, and allows her to spend the day “rehearsing for rehearsals”. Time at home must be precious but she conceals any reluctance about my intrusion with an easy charm and, low-key in black leggings and a comfy top, dutifully curls up on her sofa to answer my questions.

Talented, fresh-faced and fashionable, Royal is exactly what the world of classical music needs, and it has welcomed her with open arms. Last year saw her debut at the Royal Opera as Miranda in Thomas Ads’ The Tempest, a recording of Schumann songs, her third Prom concert, and an exclusive record deal with EMI. “I’m getting there,” she says, with perfect understatement, “everything’s so new still and the repertoire is always involving new stuff, so there’s never the feeling of ‘right, now I know where I’m at.'” Having achieved all this by the age of twenty-eight, and already inspiring comparisons with Kiri Te Kanawa and Rene Fleming, you might expect just a hint of smugness, but then Royal is not your typical star. There is clearly huge ambition behind her rather English reserve but she displays a modesty and thoughtfulness that goes against the diva stereotype.

Next month will see Royal return to Covent Garden as Pamina in the revival of David McVicar’s The Magic Flute. It’s a role to which many well-established sopranos still aspire but that provided Royal with a springboard to success when, as an understudy at Glyndebourne in 2004, she was thrust on stage one night after the lead was taken ill and wowed the audience with her performance. Since then Royal has reprised the role for Glyndebourne on Tour but she still admits to feeling daunted at the prospect of the next job, and can hardly dare to think about Pamina’s killer aria. “The actual music to sing is on one level very, very difficult because the melodies are simple and clear and very clean so you can’t hide. Some music you can sort of get away with murder and still kind of pull it off but Mozart is, technically, very hard.”

Coming from a theatrical background her mother was a dancer and her father a pop singer she grew up surrounded by music but it was rarely classical (when asked what’s on her iPod she lists “Joni Mitchell, Stevie Wonder, Prince, David Bowie, Kate Bush” without missing a beat) and it was not until she saw a production of The Rake’s Progress aged sixteen that she seriously considered singing as a career. Once graduating from Guildhall School of Music and Drama, she studied for an additional year at National Opera Studio, and then won both the 2004 Kathleen Ferrier Award and the 2004 John Christie Award in quick succession. Royal’s repertoire is now wide ranging and ever expanding; she highlights Handel, Mozart, Schumann, Debussy and Strauss as the composers she feels most at home with, but past projects have been as varied as Paul McCartney’s oratorio, Ecce Cor Meum, and a concert performance of Wagner’s Das Rheingold, under Simon Rattle.

“Some singers are going to want to go out, let their hair down… but I certainly don’t think it’s a major problem”

Having won over UK audiences, Royal is now in demand across Europe and the States and 2008 looks busier than ever, with a recital tour of North America, Carmen (as Micala) at Glyndebourne, and her Vienna debut all coming up. She admits the incessant travelling horrified her to begin with; it was something she hadn’t been warned about and it very nearly put her off the job. “[But] very quickly you get used to travelling, you get used to being on your own, you learn how to understand a city pretty quickly.” I mention a recent newspaper article that suggested opera stars are resorting to drugs and alcohol to deal with the pressures of the lifestyle. “I read that! I couldn’t believe it!” she says, pointing to the author’s quite deliberate confusion of pharmaceutical and ‘recreational’ drugs. “After a performance of course some singers are going to want to go out, let their hair down, get drunk, relax, do all the things they can’t do when they’re preparing for the show but I certainly don’t think it’s a major problem.”

Royal is part of a growing ‘community’ of musicians to use the networking site Myspace to promote her work but, despite the Apple laptop on the coffee table, she professes to being terrible with computers and hopeless at updating her page. Her solo CD was released last September amidst a flurry of interviews and photo shoots but I ask if she actually enjoys all the publicity trappings that are now involved with music production: “It shocked me to begin with and then you realise it’s part of the machine. I don’t love it and I don’t hate it, I just understand it’s part of the job.” So we shouldn’t expect to see her modelling diamond jewellery any time soon? “I don’t think so,” she says, with sarcasm and a laugh, “that’s another league, that’s a whole different ball-game, and it’s so far removed from what I do and the reason I do it.”

“I love being able to see the audience”

As if to verify this, Royal talks enthusiastically about her recital work (“my private passion”) and confirms that it will continue to be an important aspect of her career. “In a way it suits me more than opera. I love that intimacy, I love being able to see the audience, I love analysing every word of that poem.” But, as she explains, this interest developed almost by accident. “The first one that I went to was the first one I was in,” she laughs, “and I couldn’t believe how long the evening was and how I was still standing there on my twentieth song.” Having studied some of Strauss’ lieder, three of which featured on her solo release, she hopes to tackle some of his operas in the future: “That’s a whole world that’s out thereit’s such a lovely way to get to know a composer, through those songs, and I do feel that my voice has the ability to sing his music.”

I’d love to quiz Royal about hints at future recordings, but, mindful of her frantic schedule, I decide to wrap things up and let her get back to the piano. Astonishingly, she has only a week and a half of rehearsals at Covent Garden before her opening night; like her big break at Glyndebourne it’s going to be test of true mettle. “I still don’t feel fully confident but that’s just the challenge of this job, you have to take the opportunities and run with them.”