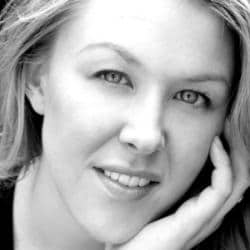 American soprano Katie van Kooten has benefited from her time on the Royal Opera’s Young Artists Programme even more than most.

Back in November 2004, only a couple of months into her time at the ROH, she was offered a starring role in the last performance of a run of Puccini’s La rondine, taking over from Angela Gheorghiu when the date became unavailable in her diary, and she later covered Rebecca Evans as Pamina in The Magic Flute at the last minute, to great acclaim.She recently returned to play Marguerite in the last two performances of the latest revival of Faust. But now she’s cast in the entire run of the forthcoming revival of La bohme, for the first time being billed as the star in her own right.

“I’m very excited,” she tells me. “I did just finish two performances of Faust, but it’s very different when it’s someone else’s show you don’t have the freedom and security that you feel when it is just you. It’s been wonderful I love it!”.

After her triumph in La rondine two years ago, it seems appropriate that Van Kooten should be back in another Puccini role to make her first appearance as a star artist. “I’m realising more and more that Mimi is exactly where my voice is right now. It’s a role that suits me down to the ground. It’s such a pleasure to sing music like that. A lot of young singers think that if it’s not a ‘challenge’ or not something you have to work at, it’s too easy and you should be something more difficult. But actually, at this point in your career you should be doing things that are fully within your grasp, things that are comfortable, rather than being worried about whether the music’s going to be too high or too low every time you open your mouth.”

She sees more Puccini in her future repertoire, mentioning that she’d love to do La rondine again (“I adore that production: it’s the only show I’ve ever been in when the audience has applauded when the curtain went up and the scenery was unveiled it’s just stunning”) and Li (a role she covered but did not play onstage last season).

Van Kooten is enthusiastic about the cast of the current Bohme, particularly tenor Marcelo Alvarez. “He’s a laugh a minute,” she says. “He is the sweetest man and he’s done the role a lot so he’s very comfortable with it. And he’s constantly looking after me, telling me to sing out to the audience and things like that.”

She seems very decided in her portrayal of the character of Mimi, too. “There are two words I would use to describe Mimi, and they are always taken in the wrong context: ‘innocent’ and ‘simple’. Most people take that to mean ‘nave’ and ‘stupid’ and I don’t think that’s Mimi at all. She’s simple as in ‘uncomplicated’ and innocent as in ‘sheltered’. Some people would say that she is very knowing in a different way to Musetta, but I really don’t see that. I really think that she is guileless. Yes, she’s a woman and she knows how to play her cards once she feels she’s on safe territory with Rodolfo.

“She very much opens the door for him because that’s what a girl does when she likes a man!” she laughs. “But I don’t think that she has an ulterior motive when she comes to his flat.”

John Copley’s production of Bohme is one of the Royal Opera’s classics, and Van Kooten relishes its lavishness and opulence. “I was told just yesterday that one of the pieces of scenery that I hide behind is the oldest piece of scenery in the opera house! I love the production. I think it’s amazing that a production that’s as old as it is has not dated, and I think it’s what makes the story work. I’m also so thankful that my first ever Mimi is a classic production. To do it for the first time in a miniskirt would just not be the same! Puccini’s favourite characters were always the very simple girls, not the complicated divas. His heroine in Turandot is Li, and Mimi is his heroine in Bohme, not Musetta the show girl.”

Mimi is one of opera’s most famous characters, but Van Kooten seems relatively undaunted by the potential comparisons that could be made between her and other sopranos from the past. “I think that’s the challenge to a young singer, especially when you’re billed alongside another big name. It’s very tempting to try and sound like somebody else, because that’s what people like. But actually, what people like is something unique, something that nobody else has. My challenge is to do what I want to do and be myself there’s no point trying to be someone else because I never will be!”

Van Kooten’s two years at Covent Garden were very intense, but she clearly loves it there. How does she see the place? “Well it’s certainly an opera-making machine. That may sound very inhumane, which I don’t intend. It’s such a warm and welcoming place to work, and so much wonderful music making goes on. It’s inspiring to be in an environment like that, and it’s been an amazing two-year journey a bit of a whirlwind. You put a singer into one of the best opera houses in the world, with some of the best singers, conductors, directors, productions in the world, and say, ‘All of this is at your disposal’. What isn’t there to learn from that!

The soprano has plans to return in future seasons, and has engagements around the world. For the moment, though, her mind is focused on the task at hand. “I can’t believe my debut Mimi is with John Copley at Covent Garden! It’s just amazing, and it couldn’t be more of a dream come true. I still can’t believe I get paid to do this!”