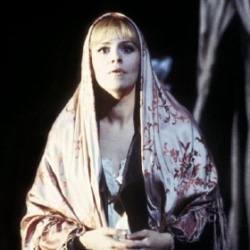 After the Proms die down, things are back to normal in London, with the start of new seasons from most companies.

The Royal Opera offers an enticing collection of operas, starting 15 September with the return of David McVicars spectacular production of Faust.

Another French opera (a theme of the Royal Opera this year), Halvy’s La Juive will be performed in concert at the Barbican for two performances only (19/21 September). Daniel Oren conducts while Dennis O’Neill and Marina Poplavskaya star as Elazar and Rachel. Back in the Opera House, starting 21 September is a new production of Mozart’s middle-period opera buffa La finta giardiniera, directed by Christof Loy and performed by an excellent young cast. John Eliot Gardiner conducts the vibrant and witty score.

Returning 30 September is Richard Jones‘s raucous interpretation of the Shostakovich masterpiece Lady Macbeth of Mtsensk. John Tomlinson stars as Boris, while Antonio Pappano conducts. After stunning reviews at its last outing, this is a production not to miss. Puccini’s La Bohme also returns under the ever-popular direction of John Copley. The first cast sees the attractive pairing of Marcelo lvarez and Katie Van Kooten as the tragic lovers. Philippe Jordan conducts most of the run, starting 23 October.

In the Linbury Studio Theatre there are two London premieres and a world premiere, which are all worthwhile. The Royal Opera will also offer the fantastic opportunity to see Rupert Julian’s 1925 film The Phantom of the Opera in the auditorium with live accompaniment by the house orchestra. Carl Davis conducts in celebration of his 70th birthday.

By way of ballet, from 5 October the Royal Ballet offers a Mixed Programme of Stravinsky, Poulenc and Jancek, conducted by Pappano. Later in the month, their colourful and lively interpretation of Delibes’s Copplia returns, starting 13 October and with casts including the great Japanese ballerina Miyako Yoshida.

The English National Opera meanwhile kick off their season with a new commission. Gaddafi: A Living Myth is directed by David Freeman, and will be performed by a diverse cast of singers. James Morgan conducts the run, which will commence 7 September. After such troubles last year, this musically unorthodox and politically vital work should be just what the ENO need to recapture their audience.

“The English National Opera kick off their season with a controversial new commission.”

Perhaps just as controversial will be a new staging of Verdi’s heartbreaking opera La Traviata, since director Conall Morrison has adventurously set the tale in 19th century Dublin. The run commences 27 September and Emma Bell and Linda Richardson share the role of Violetta. Next up is Jancek’s Jenufa, in an acclaimed production by David Alden, receiving its UK premiere. Leading international opera singers Amanda Roocroft and Catherine Malfitano star as Jenufa and Kostelnicka, while Mikhail Agrest from the Mariinsky Theatre conducts. Starts 9 October.

Over at the Barbican there is an equally impressive selection of concerts. The London Schools’ Symphony Orchestra plays Berlioz’s Symphonie fantastique on 12 September with Peter Ash conducting. On 15 October, Sir Colin Davis conducts a combined orchestra of students from the Guildhall School of Music & Drama and the Royal Academy of Music in Berlioz, Tchaikovsky and Elgar. These youth orchestras often sell out quickly so prompt booking is advised.

Davis also conducts his London Symphony Orchestra, starting with Sibelius’s first symphony on 23 September, along with Schumann’s Piano Concerto with Evgeny Kissin. Then on 27 September, we have Sibelius’s Second Symphony and Mozart’s Concerto No 24 with the same pianist. With the orchestra established as London’s finest, these concerts are absolutely unmissable.

26 September sees the London debut of the acclaimed Symphony Orchestra of Kurmangazy National Conservatory of Kazakhstan. The Kensington Symphony Orchestra performs on 18 October. It may not be professional, but on the 50th anniversary of its formation, the orchestra promises to once again demonstrate just why it is held in such high regard. On 29 September, Jiri Belohlavek and the BBC Symphony Orchestra play Beethoven’s great Eroica symphony, and on 14 October Stravinsky’s Petrushka.

As part of the Barbican’s Great Performers series, on 13/14 September Valery Gergiev brings the Vienna Philharmonic to perform Mozart, Brahms and Shostakovich. The season continues with a handful of concerts dedicated to Steve Reich. All are worthwhile, but why not try the 70th Birthday Concert on October 1, with a tantalising mix of Reich and Stravinsky, or the epic ‘modern opera’ The Cave on 4-6 October, with its exhilarating use of multimedia.

Next up on 17 October is Handel’s Theodora, performed by the Concert d’Astre Orchestra with a renowned cast, including Anne Sofie von Otter as Irene. Haydn’s The Creation follows on 26 October, with Paul McCreesh conducting, while the excellent Magdalena Koen sings a collection of (mostly Mozart) arias on 27 October. Sadly, availability is already extremely limited for Anna Netrebko & Rolando Villazon on 31 October, but search and beg for returns.

Another anniversary here – this time the Royal Philharmonic‘s 60th, and they begin their season in the Royal Albert Hall on 15 September with Mahler’s Eighth Symphony. Daniele Gatti conducts an extraordinary collection of soloists, including Janice Watson, Christine Teare, Gillian Keith and Catherine Wyn-Rogers.

Meanwhile in the intimate setting of the Wigmore Hall, there is an impressive array of music. Much is already sold, including names such as Gerald Finley, Matthias Goerne and Ian Bostridge, but not to worry. You can still catch Andrew Manze and the English Concert performing Handel on 28/30 September, or soloists from the brilliant Mariinsky Theatre Academy for Young Artists on 22 October, or even Catherine Wyn-Rogers on 29 October with the programme including a string quartet written specially for her.

“Another anniversary here – this time the Royal Philharmonic’s 60th.”

Finally, numerous events are dotted around London. Try to make it to St John’s Smith Square on 21 September to catch Bampton Classical Opera performing Mozart’s The Jewel Box. Or perhaps wander to the Queen Elizabeth Hall to see the London Philharmonic and Beethoven’s Pastoral Symphony the following day. Worth a look is the Brodsky Quartet playing Shostakovich (including the great number 8) in the Cadogan Hall, 25 September. And finally, in the same venue, Dame Kiri Te Kanawa and Frederica Von Stade in recital on 15 October.

So an enormous amount to see. The question is, how much can your credit card take?