by musicOMH
published: 1 Oct 2007 in Classical and Opera Features
Tweet 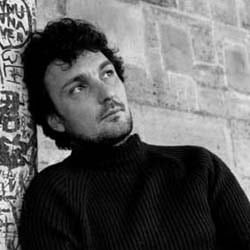 “This is the sort of house you dream about” Ludovic Tzier says, “From the guy at the main entrance to the boss, they all make the atmos- phere very comfortable and that helps you give your best. It should be the goal of every house around the world but it’s not.”

Having made his Covent Garden debut in 2004 as Albert in Werther, the French baritone is back as Belcore in L’Elisir d’Amore, and clearly enjoying himself.

Having been prepped with a bizarrely translated biography I’m surprised to discover that Tzier is fluent in English and extremely articulate forthright even. Dressed in an anorak, white trainers and a Trilby, he doesn’t look like one who would follow the crowd, and throughout the course of the interview it becomes clear that his approach is unique. Tzier was surrounded by music growing up “from Chansons Francais to the Beatles and opera” and made a prodigious start (he would apparently sing along to Carmen whilst playing with dinky toys) but it was not until he won a coveted Operalia award in 1998, at the age of twenty-nine, that his career took off. Since then he has sung around the world with some of the most highly respected conductors.

This summer was spent at the Salzburg and Baden-Baden festivals, but now the focus is on L’Elisir d’Amore. Judging from press shots taken at L’Opra de la Bastille last year, Laurent Pelly’s production will evoke the atmosphere of post-war Italian cinema, with Brylcreem, Vespas, and the works. “It looks like a Vittoria de Sica movie,” Tzier explains. “It’s poetical in a way, it speaks to us about a time that is disappearing, when people have time to live and to enjoy wine and there are nice communities.” The rehearsals are in full swing and he is quick to sing the praises of Pelly: “He has tons of ideas a second but I don’t feel the pressure to do it the way he would like me to do itI don’t feel that he wants me to do exactly what the other baritone did.”

Belcore is the pompous sergeant in L’Elisir who blithely offers Adina his hand in marriage, only to be replaced in the end by the modest country-bumpkin, Nemorino. It’s a role Tzier knows well and enjoys: “[Belcore] looks funny but he’s very serious so you have to act serious in a convincing way, because that’s what makes him ridiculous.” The role of Belcore begins an exciting season for Tzier, which will take him around the world and into a number of weighty characters (including Jochanaan in Salome and Marcello in La Bohme) and he explains how important it is to play a humorous part from time to time. Tzier is prepared to admit it’s a light-hearted opera, but those tempted to dismiss Donizetti as frothy nonsense would get short shrift: “I don’t like to listen to a brain, I like to listen to a soul.”

Most of Tzier’s work has been in the bel canto tradition, with a dash of Mozart and Strauss either side, and when I ask if he’s keen to expand his repertoire beyond these constraints he responds with an unequivocal “no”. He argues that singers need to display a “hunter instinct” for music in order to successfully communicate with their audience and that, almost without exception, his instinct is for the nineteenth century. “This is the world I know, I have a feeling I’m part of this worldI don’t think I have the culture to do Baroque music and I don’t think I have the taste to do modern music.” My interest in the latter point provokes nothing short of a rant.

“If operas are written the way they are written today quite unpleasant to hear, actually I feel it will help to kill opera. People will always come to listen to La Bohme or Carmen or whatever, but I don’t think they will still come if they are putting on modern music every two days, you know ‘beeb, bob, boom,'” he mocks. “It’s crazy, it means nothing to me and to most people.” With some frantic back-peddling I manage to swing the discussion round to recital work (a Deutsche Grammophon recording with Anna Netrebko, Elina Garanca, and Ramn Vargas has just been released) but before long he’s off again, spouting statements like lines from a manifesto.

“Maybe we are forgetting that the centre of the opera is the voice. There is no opera without voice. There is theatre without voice, you can have movies without voice, like Charlie Chaplin” he gestures flamboyantly “fantastic! But opera without voice is nonsense.” Tzier then moves on to rehearsals; in his view the rehearsal period for an opera should last no longer than fifteen days so that the performer comes to the premiere sharp and fresh: “After about fifteen days, it’s almost biological, the singer begins to lose his energy and will, and he begins to repeat.” I nod emphatically. “I’m not speaking for myselfI’m speaking for the art that made me dream.”

Tzier is a passionate man, no question, with a powerful if unconventional dedication to opera. “This is a cross to carry. We are doing a beautiful job but the price is heavy sometimes,” he concludes. Whilst in London Tzier will be totally immersed in his work, but for one reprieve: “The only bon-bon I’m authorising myself is the National Gallery to see the old paintings, I know them by heart, it’s like going to mass.” I ask which artists have particular appeal. “I like the fifteenth-century paintings, after that it’s too modern,” he laughs.

L’Elisir d’Amore opens at the Royal Opera House on 13 November 2007 and runs for seven performances through to 29 November. Tickets are available on 020 7304 4000 or www.royalopera.org.