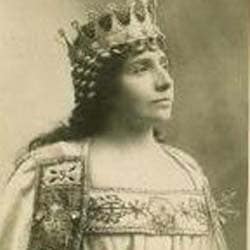 If there is such a thing as the ‘ideal Tosca’, the name that springs to mind is that of Maria Callas.

Less familiar to those under a certain age will be the name of Milka Ternina, who sang the role in the first performance at the Royal Opera House on 12 July 1900. Puccini himself took a curtain call with the Croatian soprano before declaring that she was, indeed, ‘ideal’.

Ternina went on to premiere the opera at the New York Met on 3 December 1903, with none other than Enrico Caruso singing Cavaradossi. Her career was cut tragically short after twenty years by an inflamed facial nerve.

Ternina’s role as Tosca forms the basis of the Royal Opera’s current exhibition, which is spread out around the lower floors. It is free, and may be accessed between 10 and 3.30 or around the time of a performance until next January.

Ternina was born in December 1863 in a tiny village in Croatia. When her father died, her family decided to find her a better education, and she was sent to live in Zagreb with her uncle and aunt. Following her education there, she studied the voice at the Vienna Conservatory and won the medal for the best student.

The prestigious career that followed is documented carefully in the exhibition at the Royal Opera House, which contains a number of items unmissable for the serious opera aficionado. Most interestingly are four costumes worn by Ternina that are seen in England for the first time since the soprano’s retirement.

One may question the Royal Opera’s motivation in importing them from Zagreb when Ternina specifically requested that they should never leave the city, but their presence is nevertheless welcome here in London. On display are two Tosca costumes, along with those from Tristan and Isolde and Tannhauser. The latter is particularly significant since it was last seen at the Royal Opera House on 28 August 1906 – Ternina’s final performance there. Even for a fashion novice such as me, the richness of the colours and the intricate detail of the pattern work make for a gorgeous sight.

Much work has been put into restoring the costumes – 2000 hours in one case – and the results are stunning. Bright, vivid colours and seamlessly restored design patterns betray the 100 years that have passed since they were designed. The exhibition also provides a wealth of background information about both costumes and performances, including 32 sketches by their designer Percy Anderson.

Elsewhere, the exhibition houses a variety of surprising treasures that provide immense joy in their discovery. There are designs, posters, programmes, cuttings and photographs on display, along with props that Ternina used – most notably the goblet she used as Isolde and a horn she used as Kundry (the latter seemingly health-threateningly large to me). One can also find signed photographs by Caruso, Lilli Lehmann and Puccini himself.

The exhibition is not a definitive article by any means, but the presence of the four costumes alone makes it unmissable. Given the ease with which one can browse it before a performance or during an interval, there is really no excuse for any lover of music not to explore and marvel at this opulent slice of the history of opera.

The exhibition runs at the Royal Opera House until mid January 2007.