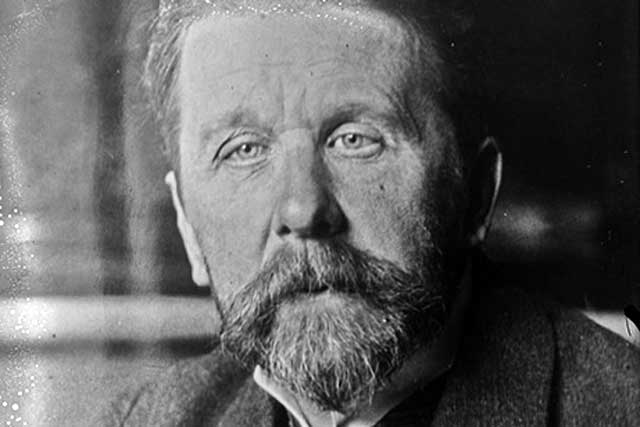 As the Eastern Orthodox Church follows the Julian calendar, its feasts generally fall later than in the West (this year’s Orthodox Easter is on 2 May), so inclusion of an Orthodox work for Holy Week is perhaps a little previous. But Grechaninov’s Op. 58 Passion Week (Страстна́я седми́ца / Strastnaya sed’mitsa) is a rarely performed work that deserves a place among works from the Western canon for the period.

Orthodox observance tends to adhere to meticulous liturgical rules (Lenten fasting, for example, gradually becomes more severe, and the foodstuffs that can be consumed at each stage are precisely documented), and so it is with the services in Holy Week: Matins and Vespers are said/sung each day, and the services of Thursday, Friday and Saturday of the week are lengthy and detailed in ritual and liturgy.

The liturgical status of Grechaninov’s collection of 13 movements is complex. Although each of the hymns forms a part of one of the liturgies for the week (two from Matins for Monday/Tuesday/Wednesday; four from Vespers for the same days; two from Holy Thursday services; two from ‘Great and Holy Friday’ services and three from various services on Holy Saturday), it is unclear whether the settings were ever ‘approved’ by the Russian Orthodox Church for use liturgically (their strict adherence to ‘unadorned’ Znamenny chant meant that even devotional works from composers as notable as Tchaikovsky did not pass muster), and Passion Week is generally seen as a concert work.

The pieces themselves represent the height of lush chromatic writing that came from those composers, along with Grechaninov, associated with Moscow’s Synodal School of Church Music in the early part of the 20th century: Kastalsky; Rachmaninov; Chesnokov. Like his fellow-composers, Grechaninov sometimes employs free composition, but at other times (for example, in ‘The Noble Joseph…’) the Znamenny chant at the centre of the harmony (like a plainsong cantus firmus in Western polyphony) comes shining through.

The works are full of the classic Russian choral tropes: blocks of homophonic harmony; the build and decay of vast chromatic chords; soaring soloists; the deployment of ‘oktavists’ (a few basses singing an octave lower than their fellows, to ground the harmony and add sonority). It is true to say that there is little here that is fast and light; these are deeply spiritual, contemplative hymns, and there is no levity around them. That said, Grechaninov works in a wide range of contrasting textures from this limited palette – for instance, opening ‘I see thy bridal chamber’ with upper voices only, or using urgent homophonic chanting to mark the approach of the Resurrection in ‘As many of you as were baptised …’. The 75 minutes of a performance, though, will serve any listener who enjoys 19th-century unaccompanied vocal chromaticism as an enjoyable primer of Russian Orthodox tradition.

Although Op.58 was written in 1911, its first recording wasn’t until 1994, by the Russian State Symphonic Cappella under Valery Polyansky. This is a fine recording, and is definitely one for those who like their Russian choral sound as authentic as possible. Somehow, only Russian basses can really achieve those low sonorities. In 2004, The Phoenix Bach Choir and Kansas City Chorale under Charles Bruffy very nearly surpassed the Polyansky recording for authenticity; Bruffy and the two southern-American choirs have an innate understanding of the idiom that is geographically and culturally startling, although sometimes the slow speeds are slightly overdone. Either recording (or both) would make an excellent addition to a collection.