Another sleigh ride on day 20 of our Advent Calendar. All we need now is snow. 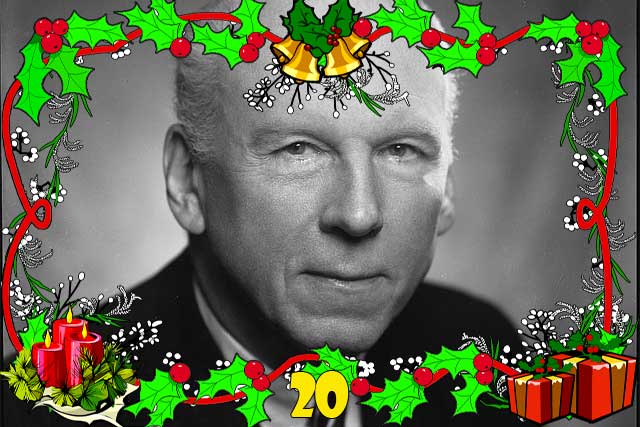 The world of light music has much to thank Leroy Anderson for. His musical, Goldilocks is a bit of a rarity these days, but his short compositions continue to appear in all kinds of milieux: Fiddle Faddle is a con-brio celebration of the orchestral violin section, and Blue Tango remains a popular favourite with ballroom dancers.

Perhaps Anderson’s two most famous compositions, though, are his 1950 The Typewriter (still used as the theme tune to BBC Radio 4’s The News Quiz), and Sleigh Ride, a winter time evergreen since its first release in 1948. The organist, Cameron Carpenter, definitely splits the judges; he comes from a well-established tradition of crossover virtuosi on the instrument (Carlo Curly being a predecessor who immediately springs to mind), and there’s a tendency for organists more steeped in a church tradition to see pipe organs very much as their territory, and anything that hints of a Mighty Wurlitzer as heretical. Carpenter plays Bach and Bacharach with equal bravura, earning both plaudits and grumbles.

We must not forget, though, that organs have just as much a secular as a sacred background, and back in the 18th century, they were often to be found in taverns, and an organist is… well… an organist. Carpenter is certainly a showman (those glittery boots may well be the visual giveaway), and this performance of Sleigh Ride is slick and thrilling. Take it away, Cameron.