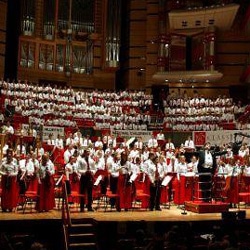 On Sunday 16 December, the National Children’s Orchestra of Great Britain gives its Christmas concert at the Fairfield Halls in Croydon.

The talented youngsters, aged between 7 and 13, will be joined by a special guest, the brilliant jazz musician Julian Joseph as soloist in Gershwin’s Rhapsody in Blue, for an enterprising programme spread over two performances.

The concerts will include works by Verdi, Arnold, Bax, Bernstein, Brahms and Tchaikovsky.

The NCO was formed in 1978 and represents the next generation of the UK’s very finest classical musical talent. The orchestra is seeking to spread what it offers to as wide a range of young people as possible, including less-privileged children from the state school system and from the black, Asian and minority ethnic communities.

That’s not to say that talent isn’t the major criterion for membership. Two of the last four BBC Young Musicians of the Year (cellist Guy Johnston and virtuoso violinist Nicola Benedetti) are amongst their most famous alumni. One-time NCO trumpet player is no other than Daniel Harding, Principal Guest Conductor of the London Symphony Orchestra and the first non-Italian and the youngest maestro, at just 30, to open the new season at La Scala, Milan with his acclaimed performance of Mozart’s Idomeneo.

Throughout the summer, with a grant from the lottery-funded National Foundation for Youth Music, NCO distributed some 20,000 audition-application leaflets in specially-selected schools across the UK and ran a supporting national ethnic media advertising campaign to raise awareness of what it does among talented musicians whom they believe considered NCO membership beyond their scope.

Next year NCO celebrates a Jubilee Year – its 30th Anniversary – by launching a special appeal to raise over 600,000 to fund its work and provide bursaries to help highly-talented but less-privileged children realise their dream of taking up an offer to play with the UK’s top orchestra for children in the 7-13 age group.

The orchestra’s President is Sir Simon Rattle, no less

The National Children’s Orchestra of Great Britain provides younger musicians with the opportunity to play in a high standard orchestra with children of similar age and attainment (children “graduate” at fourteen). Each year the NCO trains over 500 of the country’s finest new musicians in the skills and techniques they need to play brilliantly in full symphony orchestras and offers innovative and groundbreaking opportunities to its children that have most recently included a tour of China by the NCO’s Main Orchestra who performed at the prestigious Beijing Music Festival.

The orchestra’s President is Sir Simon Rattle, no less, who recently said, “Since its inception, The National Children’s Orchestra has been making an outstanding contribution to the musical life of the country, encouraging excellence amongst our most promising instrumentalists.”

16 December is surely a date worth putting in your diary.