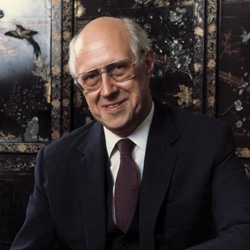 “The significance of Mstislav Rostropovich’s work spreads far beyond his playing of the cello; this versatile and ever-inspiring musician is a great and deep man, a profoundly creative artist, whose contribution to cultural life is immeasurably precious. I would place his work at the highest level of creative achievement, worthy of comparison with that of a great scientist or inventor or poet.”

The words of Dmitri Shostakovich, taken from an article by the composer written in the 1960s, mark Rostropovich out as one of the outstanding classical music artists of the 20th century. The great cellist died on 27 April 2007, of a long illness believed to be cancer, aged 80.

Primarily a cellist but additionally a highly respected conductor of the classical music of his homeland, Rostropovich was a hugely influential political figure. It almost seems churlish to be documenting his influence in one paragraph, but the incident he became best remembered for was a fleeing of his home country in 1970, necessitated by the writing of a letter in support of the dissident Alexander Solzhenitsyn. He also helped President Yeltsin to fend off a prospective Russian coup in 1991, seemingly helping stop the storming of Parliament single handedly. Only two years earlier, he found himself at the centre of the celebrations as the Berlin wall came down, performing a Bach suite in the city two days after its opening.

All are examples of Rostropovich’s uncanny gift for being in the right place at either the right – or completely wrong – time. Whatever the situation his music making spoke volumes. None more so than when the Russians had taken their tanks into Prague in the summer of 1968. On that very night in August the cellist was to perform Dvorak’s Cello Concerto at the Proms with the USSR Symphony Orchestra. After frenzied conferences the concert went ahead – and was one of his landmark performances, happily now captured and reproduced on disc by the BBC.

Rostropovich recorded all the essentials of the cello repertoire, many more than once. His versions of the Dvorak concerto with Herbert von Karajan, the Brahms sonatas with Rudolf Serkin and the Bach solo suites, to pick just three, are mandatory listening for any cello students.

But it was in the field of 20th century music that Rostropovich made his greatest contribution, raising the profile of the cello in his friendships with, and subsequent dedications and commissions from, the leading classical composers of the time. Cellist and fellow admirer Yo-Yo Ma has estimated that he either premiered or commissioned as much as a third of the current cello repertory.

Shostakovich cemented their friendship with two concertos and a sonata. All three were premiered in Russia by Rostropovich, but it’s the recording in Radio House, Moscow, of the Cello Sonata that sticks in the mind. With the composer seated at the piano, Rostropovich produces a performance of such probing intensity the hairs stand up on the back of the neck. And when asked his feelings on the composer, Rostropovich responded that the only man in his life of greater importance was his own father.

“Cellist and admirer Yo-Yo Ma has estimated that he either premiered or commissioned as much as a third of the current cello repertory.”

Sergei Prokofiev composed his Sinfonia Concertante for Rostropovich, who also gave the world premiere of his Cello Sonata with another great, Sviatoslav Richter, in 1950. Other Russian composers to offer their talents for the cellist were Khachaturian, Schnittke, Myaskovsky and Vainberg. Lutoslawski, Dutilleux, Boulez and Leonard Bernstein are just a handful of the Western composers who wrote substantial works for him. You simply couldn’t be a composer of any salt, it seems, without being able to write for him.

Perhaps the most extraordinary and unlikely friendship made by Rostropovich, however, was that he enjoyed with Benjamin Britten. The pair struck up an incredible camaraderie and understanding after their introduction by Shostakovich in 1960, so much so that after Britten’s death, whenever Rostropovich visited his home county of Suffolk he would go straight to his grave and give it a hug.

As cellist and accompanist the two made definitive recordings of sonatas by Schubert, Debussy and Bridge, while as composer and dedicatee the results were even more astonishing. Britten’s Cello Symphony, Sonata and three solo cello suites all carry a dedication to Rostropovich, but though he recorded the first two on two occasions, for Decca and EMI, he could not bring himself to play the third for some time after the composers death.

“‘Slava’ (the Russian word for ‘glory’) became his official nickname, and suited his charismatic and affectionate character.”

‘Slava’ (the Russian word for ‘glory’) became his official nickname, and suited his charismatic and affectionate character. Cellists the world over have written of his generous spirit and inspirational qualities.

I feel fortunate to have seen Rostropovich in concert both as a cellist and conductor. What seemed most striking in these brief encounters was his total sincerity for the music he was playing, seen through the eyes of a man who seemed nearer to 50 than 80 years old. His command on the podium brought stunning results with the London Symphony Orchestra in Shostakovich’s Tenth symphony, while the same orchestras accompaniment for Maxim Vengerov in the Violin Concerto was truly electric. He made far fewer recordings as a conductor, but Rostropovich’s finest achievements were not surprisingly the Shostakovich symphonies for Warner Classics, balanced by two excellent opera sets for BMG Mussorgsky’s Boris Godunov and Prokofiev’

It’s to be sincerely hoped that EMI reissue the box set of his recordings in Russia from 1950-1974, an incredibly valuable document that documents his recordings with many of the Russian composers named above. His influence on the cellists of today cannot be calculated, and only recently Steven Isserlis affectionately documented a short tour of the US where the pair were performing Brittens Cello Symphony. Isserlis it is who makes the telling quote of all, proclaiming, There has never been an instrumentalist who has done as much for their instrument as Rostropovich has done for the cello.