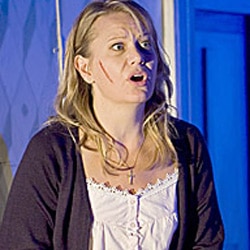 At this year’s Olivier Awards, presented at the Grosvenor House Hotel, London on Sunday night, there were three opera recipients. A Special Award was presented by Dame Janet Baker to Sir John Tomlinson for his contribution to the art over a long and distinguished career.

The Best New Opera Production was English National Opera’s Jenufa and its star Amanda Roocroft won the Outstanding Achievement in Opera Award for her portrayal of Janacek’s tragic heroine.John Tomlinson, who was knighted in 2005, was born in Lancashire and has sung regularly with The Royal Opera and ENO, and appeared with all the major British opera companies. He has had an international career that has included many appearances at Bayreuth in roles such as Wotan, the Wanderer, King Marke, Titurel, Gurnemanz, and Hagen. Most recently, he has appeared at Covent Garden as Wotan in Siegfried and Gtterdmmerung and in Richard Jones’ production of Shostakovich’s Lady Macbeth of Mtsensk.

In his acceptance speech, he said “It’s incredibly special to me to be presented with an image of this great hero of straight theatre by that great heroine of the operatic stage, Dame Janet Baker”.

Amanda Roocroft, the British soprano, who has been honoured with the Oliviers’ Outstanding Achievement award in the field, is also coincidentally from Lancashire and has enjoyed a successful career since graduating from the Royal Northern College of Music in 1990. She was seen at Covent Garden last year as Desdemona in Verdi’s Otello and as Jenifer in Tippet’s The Midsummer Marriage in 2005.

English National Opera’s production of Jenufa opened in October of last year. MusicOMH’s review described it as “a powerful and moving account of Jancek’s opera”. The production was directed by David Alden.

The Olivier Awards (formerly known as the SWETs) concentrate mostly on theatre and musical theatre. This year, the West End revival of Sunday in the Park with George by Stephen Sondheim (increasingly no stranger in the operahouse) won five awards.