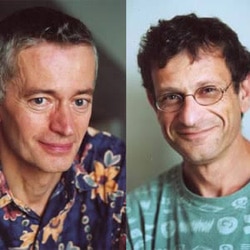 Patrice Caurier and Moshe Leiser are the directing duo who have been working together for nearly 25 years, having produced more than 70 operas all over the world.

They are in London at the moment reviving their sparkling production of Rossini’s Cinderella story, playing appropriately over the Christmas period.

I caught up with them for a stimulating and wide-ranging conversation at the end of the working day, a couple of weeks before the show opens.

Belgian Leiser and Parisian Caurier met in 1983 and began working together immediately. They only work as a pair, an unusual arrangement in the opera world. In fact, they are part of a bigger team, with Christian Fenouillat (sets), Agostino Cavalca (costumes) and Christophe Forey (lighting) not only regular collaborators but the only people they now use. I asked them about their approach and the advantages of working as a “package” of artists. Moshe sits in the background nodding, as Patrice explains “You don’t get the ego trips you can get when working with designers you don’t know. We prepare a production together and the fights and arguments take place before rehearsals begin. By then we’re agreed on what we want to achieve.”

To begin with, Patrice is the talker, with Moshe listening passively, but over time this reverses, with Moshe getting more and more animated, gesticulating widely but precisely to make his points. They are an easy couple to interview and you get a sense of the creative flow that they facilitate in rehearsals.

Both men read music and studying the score is always the starting point of the process. Do they listen to recordings as well? “Sometimes. It can help imagine what can be done with a work and gives you a framework.” Moshe tends to lead the rehearsals with Patrice sitting back and observing, providing a more objective eye. Their approach is very organic; Moshe refers to their method of “working from the inside”, that is not imposing the performance on the singers but drawing it from them, while keeping a general vision in mind. “Ultimately, working from the inside means treating the composer’s intentions as what is most important,” he explains.

We talk about how you serve the intentions of a composer like Wagner. Caurier and Leiser completed a Ring cycle in Geneva recently and, although they are aware there’s a danger of over-simplification in an interview like this, they are easily drawn on their thinking behind the production. “We set it directly after World War II. The Rhine contained the gold but also piles of corpses and that wasn’t just about the Holocaust. All civilisations are founded on murder, and the beginning of Das Rheingold is a continuation of a previous Gtterdmmerung.” So, it’s history repeating itself, going in cycles? “Exactly, and everything Wotan does is to bring Siegfried into being. Siegfried has no knowledge of history, as Mime does, he can move forward without the baggage of what’s gone before. If he’s the perfect German, it’s because he doesn’t have the burden of history. There was a story before Rheingold begins how the gold got there in the Rhine, before the new cycle began – and this idea was the basis of our production.”

“We can offer a richer existential moment”

The two men dovetail each other in their explanation but, now fully warmed up, Moshe starts to take over. He moves on to talk about how society has become so fast, how we’ve become reliant on immediacy and short-termism. It flows naturally out of their thoughts on the evolution, or more appropriately revolution, of history which underlay their Ring interpretation. I ask if they feel that the Arts, opera in particular, is an antidote to that demeaned culture that surrounds us every day. Moshe: “It helps us resist it. We can offer a richer existential moment.” I say that the fact that, in our fast-format society, it’s encouraging that you can still have sell-out cycles of The Ring, that people are prepared to sit down for 20 hours and concentrate on such difficult material. “It’s a miracle”, suggests Moshe, by now definitely the more loquacious of the two.

Again, the conversation flows effortlessly on, now to the problems of funding for opera, how in this country ticket prices have to be so high, because subsidy is a fraction of what it is elsewhere in Europe. “In the 17th Century in France, artists like Moliere, Lully, Racine were sponsored by the King and were powerful figures,” says Moshe. “Shakespeare had to cross the river, build his own theatre and crack jokes to ensure box office comes in. The history of subsidy is a very, very long one in Western Europe.”

Patrice: “Here, it’s very difficult to present works outside the main repertoire. We recently did a production of Bartok’s Bluebeard’s Castle in a provincial French theatre and it was sold out, 2000 seats, people of all ages came. Here, we’ve noticed that audiences are older too; maybe that’s financial.” I suggest that it’s a life-cycle thing, that perhaps people grow into opera as they get older but Moshe is quick to point out that if that’s so, it’s not the case in Europe. “I really don’t understand why people only come to opera here when they’re in their fifties.” I say that theatregoing in England has a huge risk element; with sky high prices you only have to get stung once or twice and you’re much more cautious. “Yes, and it then becomes a vicious circle. It’s a political decision. The government says that only rich people go and that’s because they can afford it, so they withdraw funding which pushes prices even higher.”

Bearing in mind that we’ve talked a lot and hardly touched upon the current production, I pick up on a comment they made in an earlier interview, in which they said that doing a comedy is more difficult than doing The Ring. I ask if they said that before or after they’d done Wagner’s epic and they say they still hold very much to that view. “It’s actually much easier to rehearse a tragedy because it’s performed over a large timescale. Wotan’s monologues are long and are easier to work with. A comedy goes very fast, every moment counts and there are changes every few bars. It all has to be sharp and detailed.” Moshe snaps his fingers as he talks about these movements and character changes that need clean articulation and are absolutely unrelenting in a work like La Cenerentola. “It’s particularly true with Rossini”.

As we’ve finally arrived at the opera they are currently working on, I ask how the rehearsals are going. “Very well,” says Patrice, “We have an absolute master of comedy in Corbelli (Alessandro Corbelli who plays Don Magnifico). He’s wonderful and leaves everyone else behind. He’s so fast and sharp. But we have a very good cast this time Toby Spence and Magdalena Kozena they are doing really well. We’re very happy with it.”

The hour has flown by quickly and we’ve covered a lot of ground but the pair have to leave, as they are going to Sadler’s Wells to see Richard Jones’ Glyndebourne Macbeth. He’s a colleague they greatly admire. Moshe’s parting shot is one that might surprise. He says that people don’t go to the opera for the music, although that’s what conductors usually believe. “People come to find an incredible place where the music meets meaning“. He intertwines his fingers to illustrate the coming together of sympathetic creative elements and the gesture of interconnection seems to sum up the fruitful working relationship of these two fascinating men.