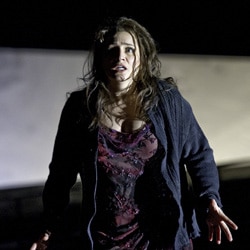 Backstage at the Coliseum is always a hive of activity, and since my interview with Patricia Racette has been fitted into a tight schedule, just before an evening dress rehearsal, I have to fight to reach her dressing room.

Once safely inside, however, the American soprano making her ENO debut in a new production of Janacek’s Katya Kabanova is unflappable charm personified, and we’re quickly down to business.

Despite this being Racette’s first Janacek production in English, she’s effusive about the experience: It works really well, actually: in terms of how it sits in your mouth, it seems to go from consonant to consonant, just like English, rather than Italian or French, which very much go from vowel to vowel.’

And although she didn’t think twice about saying yes to ENO, she still feels most at home in the original language I always joke that I must have been a Czech maiden in a previous life!’ Racette credits her colleagues for their collaboration in finding the best English expression of the many subtleties in the Czech, though singles out director David Alden for his insistence on getting things exactly right.

I love working with David: he’s such a visionary and so incredibly musical in his direction. He’s always impeccably prepared he knows the score backwards and forwards and besides all that, he’s such a fun, good-humoured person to work with.

What’s great is that he’s very hands-on, but he trusts his collaborators. If you push him on something, he says, “I don’t know I want to see what you do with it” which is really satisfying as an artist, instead of having someone force their vision on you. This art-form fares best when it functions as a rich collaboration: I’m never going to have the same overall vision of the piece that David does, or the set designer, or the lighting designer.’

She is full of praise for the whole creative cast: [Conductor] Mark Wigglesworth is just so detailed and nuanced in the score, and Stuart Skelton [singing the part of Boris, Katya’s lover] is a wonderful artist and a perfect colleague and best of all, he can pick me up, which is an excellent trait to have in your leading man!’

We touch briefly on the recent potential-disaster-turned-resounding-triumph at ENO, when both the tenor singing Nemorino in The Elixir of Love and his understudy became indisposed, and no replacement familiar with the specially-prepared English translation could be found. Edgaras Montvidas stepped in to sing the role in Italian, and the other characters warmed to it and began to switch between English and Italian for comic and dramatic effect such that The Elixir d’Amore at Anglo-Italian National Opera’ (as one blogger put it) became the operatic talk of the town.

Now that is the beauty and magic of live theatre!’ Racette exclaims. Audiences love to feel that something is evolving on stage right before their eyes that when, frankly, things go wrong, the musicians adapt and fix things. We’ve grown so accustomed to the perfection continually created in recordings that it’s easy to forget that opera is and always has been all about live performance, and thus necessarily contains imperfections.’

That sense of watching something happen right before an audience’s eyes is very much part of Katya Kabanova although in a much darker way than what happened with the Donizetti.

It’s a phenomenally powerful piece I think Janacek is pure theatre set to music and David Alden’s take on it only adds to that. It’s going to pack a real punch, and I love that we’re doing it without an intermission it really keeps the grip of that dramatic tension.’

The title character is trapped by the cold, conservative mores of her town and, in particular, her mother-in-law, and Racette sees Katya as a lively, free-spirited soul who is doomed to ruin almost from the beginning.

I think we should feel sorry for any tortured existence such as Katya’s. In some ways it’s her own weakness that drives her to do what she does but when you get a sense of the oppressive nature of the community around her, you can see that there’s no other place for this energy in her to go, and she’s completely tortured about it. She’s just desperate: it’s something that she doesn’t entirely have control over, and feels that she needs to act upon, but is completely and utterly self-loathing about.

So at the end of the first act, when her husband leaves on his trip and she begs him to command her not to converse with any strangers, she’s trying to make herself conform to custom. But she knows in that instant that this is her ruin, that the energy inside her has to go somewhere it’s simple emotional physics.’

What else, I ask, does Racette have lined up? A new Janacek role, perhaps?

Emilia Marty [from The Makropoulos Case] is in my future plans, although nothing’s definite yet. Unfortunately, it’s no secret that Janacek is pretty much box office death over in the States as one general manager once said to me, “We just can’t get the butts in the seats!” so it’s just not scheduled that much over there, for economical reasons. But I was talking to Sue [Susan Bickley], our Kabincha, who said that he’s done so much more over here in Europe, which I think is fantastic.

I suppose my current signature part is Butterfly, since I’ve done so many of them including, in fact, the production which originated here [at ENO], which I am absolutely bananas about! I do sing a lot of iconic repertoire, but my interests are very wide. At the start of 2011 I’m doing my first Turn of the Screw, which I’m really looking forward to. What really concerns me is the dramatic pulse of the thing, so roles like that and Katya are right up my street.

But next I’ve got a series of recitals, which are going to be pretty much unique. I start off “legit”, if you will: Poulenc songs, an Italian group of Puccini and Tosti and Mascagni, and then I’m closing the first half with the “Papers” aria from The Consul [by Menotti].’

Then her eyes light up as she throws a curve-ball: Then the second half is filled with my cabaret I do that a lot, actually, and I don’t sound like an opera singer when I do it! It’s sort of an experiment to see how this hits an audience. I’ve even done cabaret/jazz shows in the middle of runs before! Last year I was doing a new piece by Paul Moravec called The Letter, and I did some nights at the Lensic in downtown Santa Fe.’

With both the ENO Head of Press and chief make-up artist hovering anxiously at the door, I end by asking Racette what roles she would pick for herself, had she the choice.

Oh, I have a huge list! One role I really, really, really must do before I leave this earth is Manon Lescaut. I’d also like to do The Consul, Lady Macbeth of Mtsensk, Liza in Pique Dame But the beauty of that question, and my good fortune, is that throughout my professional life items on that list have regularly been crossed off, which I’m very happy about.’