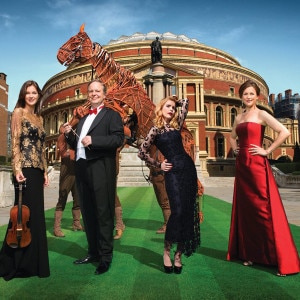 The promotional photo chosen to launch the 2014 BBC Proms season must have been the result of quite a few discussions between PR people: “Yeah, right, no, magic.” They finally came up with Hot Violinist, Very Slender Presenter, Portly Man with Baton, Joey the Wonder Puppet from War Horse and someone called Paloma Faith.

Fortunately the proportions suggested by this are not borne out by the programming as a whole, since the actual classical music as represented by Hot Violinist and Portly Man, ie. the music which is supposed to be the Proms’ central core, fares rather well this year, the last season under Roger Wright. In a nutshell, if you love Bach or Richard Strauss, you’ll be well pleased; if you love Handel, the 10 minutes allocated to that composer may leave you frustrated, but then that’s not going to be a new experience for you.

For the ninth year running, Promming tickets are set at £5 – that has to be pretty impressive given that it would enable you to hear the Berlin Philharmonic, the Leipzig Gewandhaus Orchestra, the Cleveland Orchestra, Glyndebourne’s Der Rosenkavalier, Salome with the Deutsche Oper Berlin under Donald Runnicles and Elektra with Semyon Bychkov conducting the BBC SO, all for £30 – about the cost of a single ticket at many venues, and vastly less than that at most of them.

The highlights include both of Bach’s great Passions – the first time that both the Matthew and John have featured in a single season – and both are starrily cast, the Matthew with Mark Padmore’s Evangelist and Simon Rattle conducting the BPO and the John with James Gilchrist’s Evangelist and Roger Norrington conducting the Zurich Chamber Orchestra. The First World War is of course a major theme, with Britten’s War Requiem and works by composers such as Butterworth featuring strongly. Further commemorations are the 150th anniversary of the birth of Richard Strauss, handsomely celebrated with three of his major operas, and the 80th birthdays of Harrison Birtwistle and Peter Maxwell Davies.

As always, the Proms aims to engage with the widest possible audience, with more content than ever this year available across PC, mobile and tablet, and every Prom will be broadcast live on BBC Radio 3, with additional broadcasts on Radios 1 and 2, and, for the first time, on Radio 4 and Radio 5 live. There will be 12 world premieres this season, 10 of them BBC commissions, and 23 European, UK and London premieres.

This year’s First Night is on July 18th – Andrew Davis will mark his 70th birthday with a performance of Elgar’s The Kingdom, and the Last Night on September 13th features Janine Jansen, Elizabeth Watts and Roderick Williams. It makes a change not to have that last night clashing with the Wigmore’s season opener on September 6th, but what a choice with which to be faced anyway, on that special evening – Joyce di Donato with Tony Pappano at the Wigmore, or at the Proms, the St Matthew Passion with Rattle, the BPO, Padmore and Gerhaher? Few, if any other festivals can present us with such exquisite agony; you can almost hear the scribbling and crossing out of choices all over London.

The BBC Proms 2014 runs from 18 July to 13 September. Full details on the official site.