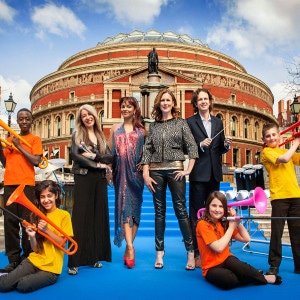 The 2015 season is the 120th anniversary of the world’s largest and longest-running music festival, with 92 concerts over two months. As ever, the programme choices lead to heated debate, ranging from ‘WTF? Dance music in Ibiza?’ to ‘Hmm, hardly any Handel, precious little Poulenc, sparse on Schumann and Schubert, woefully lacking Wagner…’ and as always there is the exquisite pain of choosing between the last night here (Danielle de Niese and Jonas Kaufmann) and the first night over at the Wigmore (Iestyn Davies).

However, for the tenth year running the price of a promming ticket has been kept to £5, which we still think is the best bargain in town and, not to mince words, puts a sock in the mouths of those who assert that classical music is ‘elitist’ and ‘too expensive.’ Every prom will be broadcast on BBC Radio 3, there are several TV showings (with one of this year’s innovations being a CBBC presentation) and, recognizing the fact that last year saw 56% of all unique browsers coming from mobile and tablet, this year there will be more online than ever before across PC, mobile and tablet.

So what are the highlights, and which Proms will we be fighting over? Regular readers will know that your classical editor would rather eat chocolate pilchard creams for lunch than attend anything containing the words Ibiza, Hip-Hop, Swing, Bollywood or ambient music but there is plenty for those of like mind – and even quite a lot for our friends with different tastes. The most sought-after events will probably include the complete Beethoven piano concertos performed by Leif Ove Andsnes and the Mahler Chamber Orchestra, the commemorations of the 150th anniversaries of the births of Sibelius and Nielsen – including all seven of the former’s symphonies – and Glyndebourne’s annual visit, this time with a new production of Mozart’s Die Entführung as dem Serail.

Bach’s solo instrumental work is explored in what we are told is “…the intimate and versatile setting of the Late Night Proms…” for that, read relegated to intimate and impossible unless you live near enough to the hall to use the underground or to have a half-way decent train service. Wonderful sounding late concerts which I will not be attending include Yo Yo Ma heroically playing all the ‘cello suites in a single (late) evening, Alina Ibragimova performing the complete Sonatas and Partitas over two nights, and András Schiff with the Goldberg variations.

In a more contemporary vein, Pierre Boulez’ 90th birthday is celebrated with a series of concerts, there are premieres from James Macmillan and Colin Matthews, and the BBC Philharmonic performs a newly discovered piece by Messiaen. In an even more modern style, BBC Radio 6 will present what is described as “a reimagining of classical music’ by Nils Frahm and A Winged Victory for the Sullen; apparently it is to be something entirely new in terms of performance, which indeed sounds intriguing.

Other highlights are sure to be the first ever Proms partnership with Grange Park Opera, when the Hampshire festival brings its new Fiddler on the Roof with Bryn Terfel, and Sir Simon Rattle conducting Elgar’s The Dream of Gerontius. Of course, there’s the Last Night, in which Marin Alsop will conduct the BBC SO, and Jonas Kaufmann and Danielle de Niese will between them give us some Puccini nuggets, a bit of Lehár, a Sound of Music medley and the usual standards. Will Danielle sing Rule, Britannia in full regalia, or will Jonas be resplendent, Thomas Hampson style, in a diplomatically designed flag / waistcoat? One of us will be there to report.

For full details on all Proms events, click here: bbc.co.uk/proms