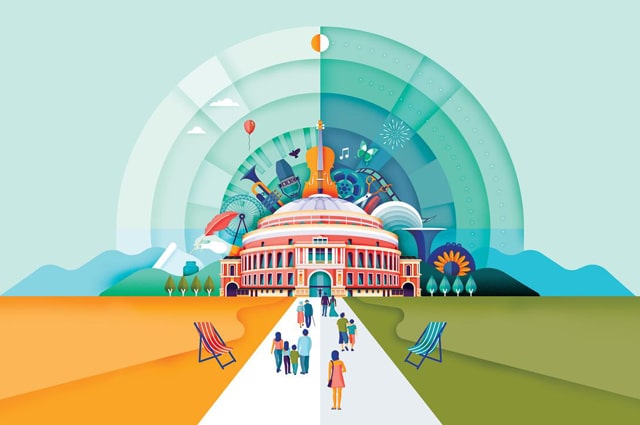 With the return of Haydn, Wagner and Bruckner, the retention of Beethoven and Mahler, a healthy dose of opera and some notable innovations concerning performance spaces, the BBC Proms look set to make the summer of 2016 a truly great one. Every year when the schedule is released there are cries of excitement as well as expressions of disappointment, but it is impossible to fulfil everyone’s wish list, and this year’s programme, which represents David Pickard’s first as Proms Director, would seem to be a particularly balanced one.

Even in a schedule of 90 or so concerts (75 of which are at the Royal Albert Hall) it is still impossible to cover everything, and so the strategy has always been to exclude the symphonies of several major composers for one season to allow space for other things. Haydn and Bruckner were the ones to be side-lined last year, but both receive plenty of coverage this time around. Haydn is represented by his Symphony No. 34 in D minor (Prom 39), his Mass in Time of War (Prom 3), and his Cello Concerto No. 1 in C major (Prom 47). The latter piece also reflects one of this year’s focuses on the ‘cello, which begins on the First Night with Elgar’s Cello Concerto in E minor (Prom 1), played by Proms debut artist Sol Gabetta.

Bruckner is represented with his Symphonies Nos. 9, 4, 6 and 3 (Proms 60, 69, 70 and 71 respectively). Proms 69 and 70 will be performed by the Staatskapelle Berlin, one of the major orchestras visiting the Proms this year, and Daniel Barenboim will conduct and be the soloist for Mozart’s Piano Concertos Nos. 24 and 22. Prom 71 will be performed by the Staatskapelle Dresden, conducted by Christian Thielemann, with Daniil Trifonov as the soloist for Mozart’s Piano Concerto No. 21. Other major orchestras appearing this year include the Berlin Philharmonic under the baton of Sir Simon Rattle (Proms 64 and 66) and the Simón Bolívar Symphony Orchestra of Venezuela conducted by Gustavo Dudamel (Prom 67).

Wagner is another composer who has been notably absent since his bicentenary season of 2013 included seven of his operas. It is, however, a little disappointing that everything that features this year are what might be dubbed his popular snippets, even if these do extend to thirty minute excerpts such as the final scene of Die Walküre in Prom 11. However, in the case of the West-Eastern Divan Orchestra (Prom 43), the significance lies in the actual act of playing Wagner following the orchestra’s decision to do so in a vote in 2005.

After nine operas featured in the 2013 season there have been far fewer in the past two years, and so the increase this year is most welcome. Music is predominantly abstract, and so it is always good for those who attend night after night to be offered a number of works with a slightly more tangible angle. This year the Royal Opera brings a concert performance of its recent production of Boris Godunov (Prom 2), which comes highly recommended although Sir John Tomlinson does not reprise the role of Varlaam, and Glyndebourne Festival Opera will be bringing a semi-staged version of its production of Il barbiere di Siviglia (Prom 14) starring Danielle de Niese as Rosina.

Duke Bluebeard’s Castle, conducted by Charles Dutoit, appears in Prom 25 while Prom 45 sees the BBC Symphony Orchestra, under the baton of Jiří Bělohlávek, deliver a concert performance of The Makropulos Affair featuring such starry names as Karita Mattila and Svatopluk Sem. The greatest rarity, however, comes in Prom 68 when Sir Mark Elder, the Orchestra of the Age of Enlightenment and the Opera Rara Chorus give a concert performance of Rossini’s Semiramide. Choral works are also a welcome feature of the season and include Beethoven’s Missa solemnis (Prom 5), Bach’s Mass in B minor (Prom 63) and Verdi’s Requiem (Prom 74), the latter conducted by Marin Alsop, star of the Last Nights in 2013 and 2015.

For all that the Proms claim to be, and indeed are, about innovation, they always have to include a healthy dose of Beethoven and Mahler symphonies for one specific reason. These pieces sell and when the Albert Hall is such a large space to fill night after night no one can afford to take too many risks. At the other end of the spectrum, however, there are several BBC commissions and UK premières. One to look out for in particular is the UK premiere of Reinbert de Leeuw’s Der nächtliche Wanderer (Prom 26) which is complemented by Brahms’ Piano Concerto No. 2 in B flat major and the conducting of the brilliant Oliver Knussen.

Many of the late night concerts feature ‘alternative’ experiences and these evenings of contrast are a part of what the Proms is all about. For example, if you love Mahler’s Symphony No. 3 in D minor (Prom 18, 7.00pm), why not stay on afterwards to try some David Bowie (Prom 19, 10.15pm)? Similarly, if David Bowie is your thing you can always arrive earlier in the evening to enjoy the longest (regularly performed) piece in the entire symphonic repertoire. It is worth noting, however, that the late night events cover a range of styles, and include concerts by The Sixteen (Prom 42) and Academy of Ancient Music (Prom 73).

There are also family Proms (Proms 10, 12, 56 and 58 which for the first time a season pass does not cover) while the Monday lunchtime chamber music series at Cadogan Hall also looks strong. The greatest innovation this year, however, is the replacement of the Saturday matinees at Cadogan Hall with a ‘Proms at… ’ series in which Saturday concerts will be performed at the Chapel of the Old Royal Naval College in Greenwich (6 August), the Sam Wanamaker Playhouse (13 August), the Roundhouse in Camden (20 August) and even the Bold Tendencies Multi-Storey Car Park in Peckham (3 September). These sound as if they could be very interesting as there is a clear attempt to match the music to the setting so that Rossini’s Petite messe solennelle will be played in the chapel and the music of Steve Reich in the car park.

Booking opens on 7 May for standard tickets, and forty-eight hours earlier for various passes. Long before then you are advised to visit the BBC Proms website to get on top of the rules concerning Proms planners, passes and booking. This is because several things have changed this year concerning prices and obtaining tickets for the ‘Proms at… ’ events, while an additional method for buying Proms passes on the day has also been introduced. Once you are all booked, however, there is nothing to stop you from sitting back and enjoying everything from Prokofiev’s Alexander Nevsky cantata on the First Night to Juan Diego Flórez’ performances of ‘Una furtiva lagrima’ and ‘Ah! mes amis’ on the Last.

The BBC Proms run at the Royal Albert Hall, Cadogan Hall and various other venues from 15 July to 10 September 2016. For the full programme and booking details visit the BBC Proms website.