The BBC Proms this year will be like no other. Barry Creasy gives us a preview. 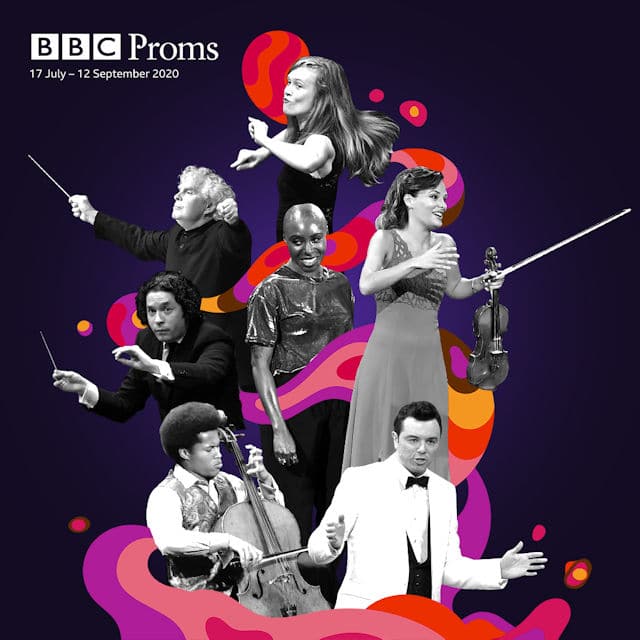 As remarked in an earlier article, due to the restrictions on live concerts because of the coronavirus pandemic, this year’s Proms programme looks very different, and will be made up of a mosaic of different opportunities to both listen and participate. Proms from the archive (including some classics from 30 or more years ago) will be broadcast every night on BBC Radio 3 throughout the season (from 17 July to 12 September), as well as regular Sunday evening broadcasts on BBC Four of televised concerts, also from the archive. ‘Listening Parties’ are being proposed on social media, allowing listeners to comment on their favourite works and performers, and Breakfast on Radio 3 will also allow similar discussions, as well as suggestions for favourite Proms recordings from listeners. Families are being encouraged to upload the results of creative sessions they spend around Proms listening. Additionally, a huge amount of Proms archive material will be available on the BBC’s iPlayer.

Obviously, much will depend on the changing guidelines around gatherings in enclosed spaces, but the BBC hopes to broadcast some live Proms in the final two weeks of the season (whether audiences will be allowed in is not yet clear), and a stellar line-up of performers are on standby for this, including, of course, the BBC Symphony Orchestra, along with Mitsuko Uchida, Sir Simon Rattle, Nicola Benedetti, Alina Ibragimova, the Orchestra of the Age of Enlightenment, Sheku Kanneh-Mason the Aurora Orchestra, Stephen Hough, Sophie Bevan, Allan Clayton and Robert Murray, as well as sitar virtuoso Anoushka Shankar with electronic artist Gold Panda and the Britten Sinfonia under Jules Buckley.

The season kicks off on Radio 3 with a ‘virtual’ First Night on 17 July, that will include some archive performances of Sir Harrison Birtwistle’s controversial Panic (from 1995), Claudio Abbado’s final Proms appearance conducting Mahler’s third symphony (from 2007), and Beethoven’s Piano Concerto No. 3 with the BBC Symphony Orchestra and soloist Igor Levit, under Edward Gardner (from the 2017 First Night). The fully virtual feature will be a rendering of Beethoven Unleashed created by Iain Farrington (who describes the work as “taking Beethoven’s music and putting it in a musical washing machine to see which colours run”) which will involve the BBC Grand Virtual Orchestra and Chorus. Farrington’s creation will be further explored in documentary film on BBC Four on 19 July.

2020 is, of course, ‘Beethoven Year’ – marking 250 years since the composer’s birth – and lovers of Bonn’s irascible composing son will find plenty in this year’s programme to enjoy. Following on from the Beethoven-Fest of the First Night, the first of the BBC Four archive concerts, on 19 July will be of a Prom from 2017, and will afford audiences with the opportunity to watch electrifying conductor Mirga Gražinytė-Tyla lead the City of Birmingham Symphony Orchestra in a programme of Beethoven, Stravinsky and Gerald Barry with violinist Leila Josefowicz and tenor Allan Clayton.

Further Beethoven archive Proms on Radio 3 include a 1996 performance of Leonore under Sir John Eliot Gardiner (18 July), Nikolaus Harnoncourt’s classic direction of Missa Solemnis from 1998, (19 July) the 2015 run of the piano concerti with the Mahler Chamber Orchestra conducted and performed by Leif Ove Andsnes (20 July) [review here], and Klaus Tennstedt and the LPO’s 1991 account of the ninth symphony (11 September).

Choral fans will not be disappointed by some of the great archive performances of this genre: Walton’s Belshazzar’s Feast with Terfel and Hickox from 2006 (2 August) [review here]; The Gabrielis’ 2003 account of Handel’s Saul (16 August); Bach’s St Matthew Passion with Collegium Vocal Ghent under Philippe Herreweghe from 1998 (23 August) and a 2017 performance of Rachmaninov’s All-Night Vigil by the Latvian Radio Choir (6 September) [review here].

The use of archive material means that opera can occupy a more generous portion of the programming, and listeners will have a chance to hear once again Barenboim’s 2013 account of Die Walküre (25 July), along with Janáček’s The Makropulos Affair in a 2016 performance under Jiří Bělohlávek (1 August) [review here], Salome under Donald Runnicles from 2014 (15 August) and Haitink’s 1996 Don Carlos (22 August).

We are promised some new commissions, including works written as a response to the pandemic by Thomas Adès and Andrea Tarrodi, and the programme includes some classics of 20th century music such as the tremendous 2012 performance by the National Youth Orchestra of Messiaen’s Turangalîla-Symphonie (11 August) and Stephen Isserlis’ landmark 1989 account of John Tavener’s cello concerto The Protecting Veil (21 July).

Early music is not neglected and the season includes a performance of Monteverdi’s 1610 Vespers by Pygmalion from 2017 (26 July), the Egarr/OAE 2003 account of Purcell’s Dido and Aenas (13 August) and a 2016 broadcast of a lunchtime Prom of English Renaissance music by Stile Antico and Fretwork (16 August).

The more eclectic side of the Proms is also well represented, and the broadcasts include John Wilson’s 2013 Hollywood Rhapsody (24 July), Nils Frahm’s and Winged Victory for the Sullen’s late-nighter from 2015 (30 July) [review here], the 2010 celebration Sondheim at 80 (31 July) and Laura Mvula and the Metropole Orchestra under Jules Buckley from a 2014 Late Prom (3 September).

One performance, though, stands out as not to be missed: Renée Fleming’s 2001 account of Strauss’ Four Last Songs (10 August).

Television highlights on BBC Four include some big names and big works, including Sir Simon Rattle’s 2002 account of Mahler’s eighth symphony (9 August), and the 2007 appearance of The Simón Bolívar Orchestra under Gustavo Dudamel with a programme of Shostakovich, Bernstein and Ginastera (23 August) [review here]. An enjoyable reunion concert for Daniel Barenboim and Martha Argerich appeared in the 2016 season, and it will be rebroadcast on 16 August [review here]. Also not to be missed is the 2017 Proms debut of the BAME orchestra Chineke!, whose programme features the young soprano Jeanine De Bique’s tour-de-force performance of Handel’s Rejoice greatly (2 August) [review here].

The complete programme can be found at the BBC Proms website, although to access details of the archive broadcasts, a search through the BBC Proms archive web pages will be necessary.