How does one plan a summer festival when the future is uncertain? Sam Smith discovers that Nevill Holt Opera has the answer. 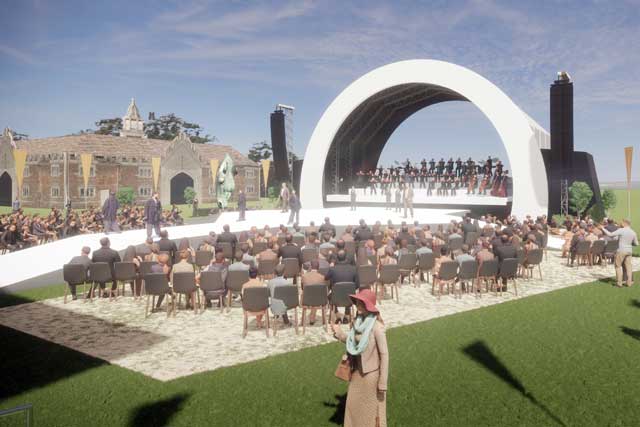 With the country still in lockdown and no one quite knowing how things will pan out, summer opera festivals have been left in a quandary. They want and need to go ahead, yet they do not necessarily know the precise rules that will govern live performance in just a few months’ time. Nevill Holt Opera has responded to the challenges this presents in the most ingenious way by hosting its 2021 festival outdoors, introducing a specially designed stage and bespoke seating arrangements. This way, short of the very unlikely event of audience attended performances still being banned altogether in August 2021 (to when this year’s festival has been moved), NHO’s season can proceed as planned, no matter what the future holds.

The giant covered stage, which will lie next to NHO’s 400 seat opera house (a recently converted historic stable block courtyard), will host a socially distanced orchestra for each performance, while a further stage in front will ensure that all audience members feel close to the action. The stage set-up is being designed to frame the beautiful valley views across Leicestershire that the venue affords, and, as a part of a commitment to its home, NHO will be working with more local businesses than ever to deliver this year’s festival.

The socially distanced audience of up to 650 people will be seated across three zones so that people will be able to choose between watching the opera from a comfortable seat, spreading out on picnic blankets on the lawn, or claiming a premium spot in a tiered and covered grandstand to ensure they beat the weather.

The festival will present the operas that had been scheduled for the cancelled 2020 season, namely Verdi’s La traviata and Mozart’s Don Giovanni. The former will be performed on 4, 5, 7, 8 and 10 August, while the latter (on 19, 21, 22, 24 and 25 August) represents the completion of NHO’s exploration of the trio of Mozart / Da Ponte collaborations, with Le nozze di Figaro having been performed in 2018 and Così fan tutte in 2019. In addition to its main festival, NHO is planning to present a ‘mini festival’ in June of chamber music and solo recitals in its theatre, and some additional performances in August, further details of which will appear on its website in due course.

Nevill Holt Opera is situated near Market Harborough, which is easily reached from stations in London, Birmingham and Nottingham, among other places, whilst there is ample free parking for those who wish to drive. This year Nevill Holt Opera has worked to make its pricing more affordable than ever, with tickets starting from just £35, and free tickets for under 18s. The date to put in your diary is 1 April 2021 when public booking opens, although if one decides to become a member the booking date is 4 March.

NHO’s Managing Director, Annie Lydford, said ‘We are all invigorated to be presenting our largest and most inclusive festival yet despite the challenges of the last year. With fantastic artists and technicians, two creative, beautiful productions – not to mention the wonderful Nevill Holt grounds and gardens – we want to make sure our audiences have an unforgettable time with us this summer’.

Nevill Holt’s Artistic Director Nicholas Chalmers added ‘Nevill Holt Opera 2021 is to be our biggest and most ambitious festival to date. We invite you to come and immerse yourselves in the world of Mozart and Verdi in a beautiful outdoor staging. Our exceptional young artists, creative teams and orchestra partners are working hard to bring you visual and musical delights as you take in the fantastic view of the Welland Valley from our home at Nevill Holt’.