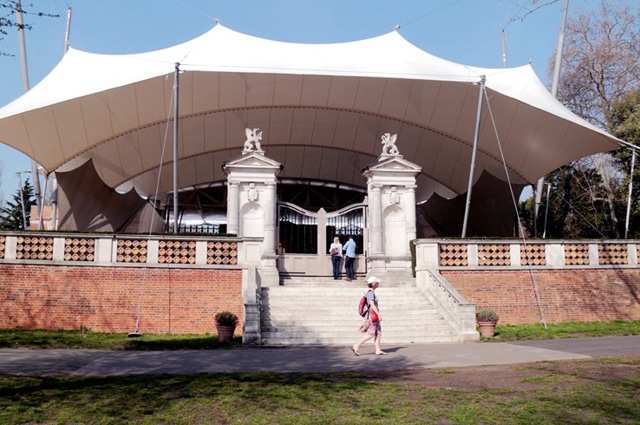 While one of the joys of going to see a summer opera at Glyndebourne, Garsington, Grange Park or West Green House is the act of making a day of it, the accessibility of Opera Holland Park is just one of its many selling points. Only a ten-minute walk from High Street Kensington underground, the venue offers its own haven of tranquillity with the tented auditorium nestled amidst beautiful surroundings, and the ruins of Holland House forming a permanent backdrop to the stage. Since it is somewhere to devote the evening rather than the whole day, there is no need to book time off work and, while there is nothing to stop you from going to town, there are not the same strict dress codes as apply at the other venues.

Opera Holland Park’s 2016 season may not seem quite as ambitious as last year’s, when there were a large number of relatively unusual works, but the programme offers several operas where London is desperately in need of a good production. Whether Holland Park delivers on these will not be known for several months, but with the venue’s large and notably broad stage it would seem to stand every chance of doing so.

London certainly needs a stirring La bohème at the moment. John Copley’s iconic 1974 production appeared for the final time at the Royal Opera House last year, while Jonathan Miller’s 2009 version for English National Opera ended in 2014. Richard Jones’ new offering for the Royal Opera is not due until 2017, while the current void was sadly not filled by Benedict Andrews’ disappointing take at the Coliseum last October. The strengths that this production (which begins on 11 June) can boast are a director (Stephen Barlow) and conductor (Matthew Waldren) with excellent track records at Holland Park, and Waldren, a musician of whom we should really take note, was recently awarded an ENO Charles Mackerras Fellowship. Anna Patalong sings Mimì and Shaun Dixon, Rodolfo.

When Die Fledermaus last appeared at the Coliseum in September 2013, it played up the Freudian elements to such an extent that it resulted in a practically dance-free ball! We are expecting a more balanced take from director Martin Lloyd-Evans, whom we have never known to throw in a bad production. He has had a number of notable successes for Opera Holland Park (including I gioielli della Madonna, Adriana Lecouvreur, Il trittico and L’amore dei tre Re) and Mid Wales Opera, and he recently directed a powerful The Rape of Lucretia as resident producer at the Guildhall School of Music and Drama. Die Fledermaus opens on 19 July, is conducted by John Rigby and boasts an excellent cast that includes Ben Johnson as von Eisenstein, Susanna Hurrell as Rosalinde and Jennifer France as Adele. This is the only one of the season’s main operas to be sung in English. The others will be delivered in their original language, although there will be English surtitles for all of them.

When David Alden’s The Queen of Spades appeared at the Coliseum last June it boasted excellent singing, but was let down by its staging, so we hope that this new production from Rodula Gaitanou (who was associate director to Lloyd-Evans on L’amore dei tre Re last year) can make amends. It certainly has a superb cast with Peter Wedd, Natalya Romaniw and Richard Burkhard all having had notable successes at Holland Park. The highest profile name of all, however, is Rosalind Plowright who plays the Countess, and who appeared here as La Zia Principessa in Suor Angelica last year. Peter Robinson conducts and the production opens on 2 August.

Mascagni is something of a specialty at Opera Holland Park, where productions of L’amico Fritz, Zanetto and Cavalleria rusticana have appeared in recent years. This year the season opens on 7 June with Iris, a piece with which Holland Park has a long association. When the opera appeared in only its second ever season in 1997, it was the first time the work had been seen in London for over ninety years, and it proved so popular that it was immediately revived the following year. This new production is directed by Olivia Fuchs (who presented Norma here in 2014), conducted by Stuart Stratford and stars Anne Sophie Duprels as Iris, Mikhail Svetlov as Il Cieco and Noah Stewart as Osaka.

The final main production of 2016 is La Cenerentola, opening on 14 July, directed by Oliver Platt and conducted by Dane Lam. There are, however, two other events in the season’s calendar. First, the Royal Ballet School, which has a long association with Holland Park, will be performing there for the first time since 2001 between 30 June and 2 July. In addition, five minutes from the main stage on the Yucca Lawn will be the third revival of Will Todd’s family opera Alice’s Adventures in Wonderland of 2013 (selected afternoons from 28 July). With the audience moving to different locations around the lawn for the various scenes, a short running time and tickets costing £5 or £10, the experience should keep the accompanying adults just as entertained as the little ones.