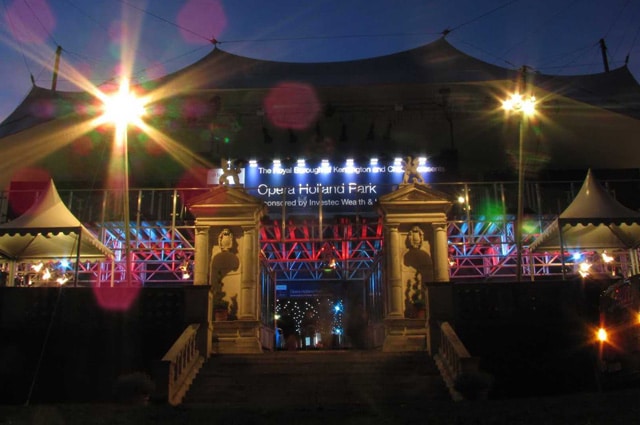 Glyndebourne, Garsington and the various Granges are hardly major treks from the capital, but in terms of accessible summer opera for the average Londoner nothing can beat Opera Holland Park. Only a ten-minute walk from High Street Kensington station, it is somewhere for the evening rather than the entire day, but the beautiful setting still feels a long way from the centre of a large metropolis. The atmosphere is both classy, as the tented auditorium sees the ruins of Holland House form a permanent backdrop to the stage, and relaxed, as there are not the same strict dress codes as apply at the other venues, even though there is nothing to stop anyone from dressing up if they wish.

Opera Holland Park’s 2017 season features four main productions instead of the five that have been seen in recent years. It is, however, quality not quantity that matters and, following its golden season of 2016 in which every production earned at least four stars from musicOMH, it is surely in a prime position to deliver more opera of a similarly high standard.

The season begins on 1 June with a new production of La rondine. The opera was last seen at Holland Park in 2011 in an excellent production by Tom Hawkes, which boasted a captivating performance from Australian soprano Kate Ladner as Magda. We have every reason to believe that this new version will be just as good, not least because it is being directed by Martin Lloyd-Evans, whom we have never known to stage a bad production. He has had a number of notable successes for Holland Park (including I gioielli della Madonna, Adriana Lecouvreur, Il trittico, L’amore dei tre Re and Die Fledermaus) and Mid Wales Opera, and he recently directed the world premiere of Julian Philips’ The Tale of Januarie, the first opera ever to be written in Middle English, as resident producer at the Guildhall School of Music and Drama.

One of the delights of the previous production was that Peter Rice’s beautiful Art Deco set worked so well in the space, and Lloyd-Evans is also a master of making a production work with its setting, whether he is faced with Holland Park’s large and notably broad stage or the smaller, but more conventional, Silk Street Theatre. The production’s designer also gives us every reason to be confident as it is takis, responsible for last year’s Die Fledermaus. Elizabeth Llewellyn, who has many appearances for English National Opera to her name and was the Countess here in Le nozze di Figaro and Fiordiligi in Così fan tutte, sings Magda, and Matteo Lippi is Ruggero. With the exception of 15 June when Nicholas Jenkins takes over, the conductor is Matthew Kofi Waldren, an ENO Mackerras Fellow and ‘Newcomer’ finalist in this year’s International Opera Awards, who has stood out in his many previous appearances at Holland Park.

Don Giovanni (from 3 June) is a work where neither the Royal Opera or English National Opera’s current productions entirely hit the mark. Kasper Holten’s for the former tends to swamp the singers with its huge set while Richard Jones’ noirish take for the latter contains many good ideas but makes the Don a little too gritty, and hence uncharismatic. This production sees Oliver Platt direct, and he has form at this venue with, among other works, Il barbiere di Siviglia (2014) and La Cenerentola (2016). The brand of entertainment and humour that he brought to those Rossinis should transfer well to this offering from Mozart and Da Ponte. It is possible to picture former Jette Parker Young Artist Ashley Riches, recently seen as The Pirate King in the much improved first revival of Mike Leigh’s The Pirates of Penzance at ENO, in the title role with his strong baritone and presence. Dane Lam, who last year steered the ship for La Cenerentola, conducts while the designer is Neil Irish, also responsible for both Rossini works. The Young Artists performance on 22 June features a different cast and conductor.

Kat’á Kabanová begins on 15 July, and is a revival of OHP’s 2009 production. As then the director is Olivia Fuchs (also responsible for Norma and Iris here) and the designer Yannis Thavoris (Cavalleria rusticana and Pagliacci). This time, however, Julia Sporsén sings the title role; Peter Hoare, Boris; and Nicky Spence, Tichon, while Anne Mason returns to sing Kabanicha. Sian Edwards conducts.

Mascagni has been something of a speciality at Opera Holland Park, where productions of L’amico Fritz, Zanetto, Cavalleria rusticana and Iris have appeared in recent years. This year, however, the venue turns to his near-contemporary and composer of Pagliacci, Leoncavallo. Zazà (from 18 July) is a rarely performed work, but its profile was raised considerably when Opera Rara presented it at the Barbican in 2015, and also recorded it for CD. The opera follows the life of Parisian music hall singer, Zazà, who is played here by Anne Sophie Duprels. She sang both Giorgetta and Suor Angelica in Il trittico here in 2015 and has just performed La voix humaine in an OHP production in the Royal Albert Hall’s Elgar Room. Other cast members include Joel Montero, Louise Winter, Richard Burkhard and James Cleverton, while Peter Robinson conducts and Marie Lambert directs. All four operas will be sung in their original language with English surtitles, with the City of London Sinfonia constituting the orchestra in each instance.

Beyond the main productions, there are several other events in the season to look forward to. Between 29 June and 1 July The Royal Ballet School, which has a long association with Holland Park, will be performing a series of works by an eclectic mix of choreographers including Mikhail Fokine, Kenneth MacMillan, Frederick Ashton and Kristen McNally. In addition, five minutes from the main stage on the Yucca Lawn will be the fourth revival of Will Todd’s family opera Alice’s Adventures in Wonderland of 2013 (selected afternoons from 13 July). With the audience moving to different locations around the lawn for the various scenes, a short running time and tickets costing £5 or £15, the experience should keep the accompanying adults just as entertained as the little ones. Then after the season proper has finished Opera Holland Park gives itself over to a week of film screenings from Luna Cinema. The movies on offer this year include Jurassic Park, Four Weddings and a Funeral, Casablanca and Dirty Dancing.