Sam Smith explores a summer opera festival that lies in the heart of London. 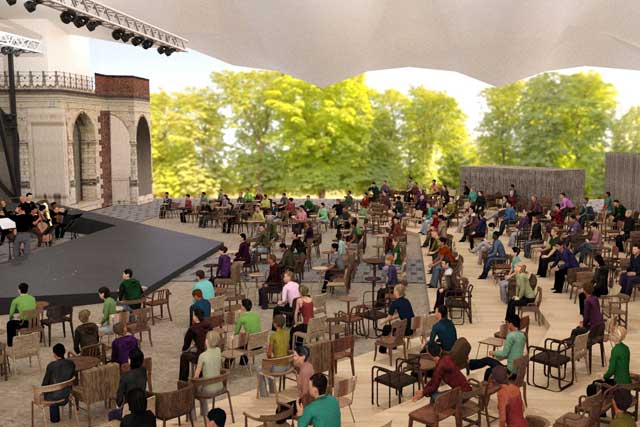 Proving once more that Opera Holland Park is an innovator both on and off the stage, it has devised an ingenious way of ensuring its 2021 season can go ahead while providing maximum safety for audiences and artists alike.

Set designer takis has numerous credits to his name at the venue, including Un ballo in maschera (2019), La rondine (2017) and Die Fledermaus (2016), and this year he is reimagining the entire stage and auditorium that lies beneath the venue’s canopied roof. Capacity will be reduced from 1,000 to 400 seats, with individual chairs that can be moved according to the numbers in each ‘bubble’ facilitating social distancing and increasing step free access. Sustainable materials in the designs will reflect the natural beauty of the theatre’s setting in Holland Park, while the ruins of Holland House will still form a backdrop to all of the drama.

The season opens on 1 June with Le nozze di Figaro. Holland Park presented Così fan tutte in 2012 and 2018 and Don Giovanni in 2017, but the first of the Mozart/Da Ponte collaborations has not been seen at the venue since 2011. Then it was directed by Liam Steel, but this new production will be helmed by Oliver Platt, whose previous hits at the venue include L’arlesiana (2019), Così fan tutte (2018), Don Giovanni (2017), La Cenerentola (2016), Il trittico (2015) and Il barbiere di Siviglia (2014). George Jackson conducts (once again, the City of London Sinfonia will be Holland Park’s resident orchestra for the entire season), while the cast will be led by Ross Ramgobin (Figaro) and OHP Young Artists Elizabeth Karani (Susanna), Nardus Williams (the Countess) and Julien Van Mellaerts (the Count). Takis is also the set designer in this instance so it is hard to picture a production ever fitting its surroundings better. There are also two Young Artists Performances on 14 and 26 June (the latter being a matinee), which will feature a different cast.

Rodula Gaitanou’s intelligent 2018 production of La traviata, with beautiful set designs by Cordelia Chisholm, makes a welcome return from 5 June onwards. With the three main principals, Lauren Fagan (Violetta), Matteo Desole (Alfredo) and Stephen Gadd (Germont), reprising their roles from three years ago, and conductor Matthew Kofi Waldren similarly picking up his baton once more, there is every reason to believe this revival will be just as good as the first time around. One thing that particularly impressed in 2018 was the spacing of characters so that we could always hone in on the important, personal dynamics, even in scenes of mass activity. We cannot help feeling that any requirements to observe social distancing in the staging may, if anything, reveal an even greater command of spatial awareness this time.

The second new production of the season is The Cunning Little Vixen (from 13 July), which will be conducted by Jessica Cottis and directed by Stephen Barlow, whose previous credits for Holland Park include Jonathan Dove’s Flight (2015), La fanciulla del West (2014) and Cavalleria rusticana / Pagliacci (2013). With its focus on nature, this opera should feel particularly at home amidst takis’ designs for the auditorium, although the designer for this particular production is Andrew D Edwards. Vixen and Fox are to be played by Jennifer France and Julia Sporsén, who were last seen together at Holland Park in 2018 as Zerbinetta and The Composer respectively in Ariadne auf Naxos, while OHP regulars Grant Doyle (Forester) and John Savournin (Priest and Badger) appear alongside them.

Holland Park has a long and proud tradition of bringing to public attention works by Italian composers whose own considerable talents were eclipsed by those of their contemporary, or near contemporary, Puccini. In the past it has presented creations by Wolf-Ferrari, Cilea, Leoncavallo, Montemezzi, Catalani, Zandonai and Giordano, but this year it returns to a composer it has particularly championed over the years. Mascagni’s L’amico Fritz (from 16 July) last appeared at OHP in 2011, in a production by Annilese Miskimmon, but this time it sees Julia Burbach, a Royal Opera staff director who has revived such productions as Tristan und Isolde, Ariadne auf Naxos and Così fan tutte, tackle the opera alongside Italian conductor Beatrice Venezi and designer Alyson Cummins. Mascagni’s opera tells of Fritz Kobus, a wealthy philanthropist who is handsome and likeable, but has a particular aversion to marrying. That is until Suzel walks into his life, and the piece acts as a study in two people’s realisation of their feelings for each other. Kiandra Howarth sings Suzel while Paul Carey Jones, who was a splendid Lescaut here in Manon Lescaut in 2019 and also sings Wotan in Longborough Festival Opera’s concert performances of Die Walküre this summer, plays David.

The Pirates of Penzance (from 3 August) represents a collaboration with Charles Court Opera as well as the first Gilbert and Sullivan that Holland Park has presented in twenty years, and is directed by John Savournin who also plays the Pirate King. Richard Burkhard sings Major-General Stanley, Peter Kirk Frederic, Yvonne Howard Ruth, Daisy Brown Mabel, and Trevor Eliot Bowes the Sergeant of Police. The conductor is David Eaton, the designer Rachel Szmukler and the choreographer Damian Czarnecki. This Pirates was originally scheduled for 2020, although in the end a reduced and relaxed performance was presented at the venue last year.

The date to put in your diary is 14 April 2021 when public booking opens, although if one becomes a member or friend booking is either open, or coming up, depending on the type opted for. Most of the productions feature a Discovery Matinee and/or Relaxed Performance, tickets for which can be booked on 21 April along with INSPIRE £22 tickets. With the exception of The Cunning Little Vixen, which will be performed in English, the operas will be sung in their original language, though all will feature English surtitles. There are also a host of online events that will be held both before and during the summer season, while OHP’s excellent 2019 production of Un ballo in maschera can currently be rented online.