by Sam Smith
published: 3 May 2016 in Classical and Opera Features
Tweet 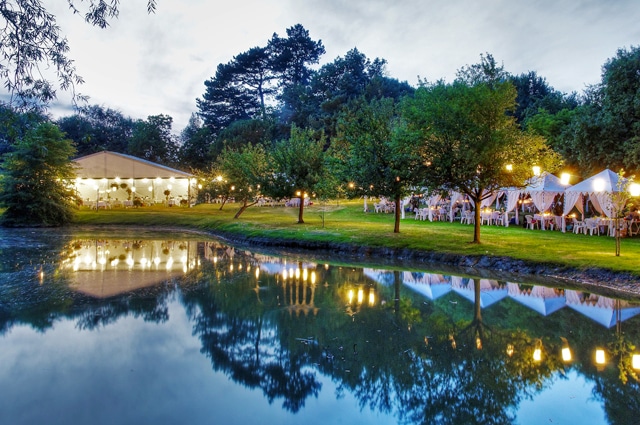 Although West Green House Opera is now in its seventeenth season, it still feels like a new discovery. No matter how often one visits, it is impossible not to marvel at this hidden gem that, unlike other summer opera venues such as Glyndebourne, Garsington and Grange Park, is built around gardens that are open all year and constitute a visitor attraction in their own right.

If Grange Park is around half the size of Glyndebourne, then West Green House seems half that size again, but only because it generates such feelings of intimacy. In reality, there is much to see and arriving early is highly recommended to make the most of the setting, which includes water and walled gardens and the beautiful lakeside area where everyone picnics. On a good day when the sun reflects on the water and illuminates the various shades of green that lie all around, the beauty of this place would be a match for anywhere in the country.

Each summer the glass and steel opera house, known as the Green Theatre, is placed on the opposite side of the gardens to the lake, and last year director Richard Studer played on the venue’s intimacy (it seats 400) in two noteworthy productions. It was hard to imagine any presentation of The Marriage of Figaro ever feeling any more pared down or vital. With the orchestra standing sixteen strong, the chorus cut completely and the performance utilising Amanda Holden’s English translation (with no surtitles) the production certainly fitted its setting well. It was, however, Ariadne auf Naxos that took things to another level, with remarkable performances from Rebecca Nash (Ariadne), Jonathan Stoughton (Bacchus), Nicola Said (Zerbinetta) and Rosie Aldridge (The Composer) making parts of the evening feel just as moving and accomplished as anything to be found in any of the world’s major opera houses.

West Green House Opera was founded by Marylyn Abbott, who owns the house and restored and redesigned the beautiful gardens. She has always played a very hands-on role in putting together each opera season, but this year a new Artistic Director, William Relton, has been appointed. He will be directing La traviata (23-24 July) with the cast led by Italian-American soprano Jessica Rose Cambio as Violetta. Alfredo will be played by Jung Soo Yun who won the Montserrat Caballé Singing Prize in 2011 and is an Opera Now Rising Star. Last year his performance as Lensky in Grange Park Opera’s production of Eugene Onegin featured a stunning performance of ‘Kuda, kuda vï udalilis’. The West Green House Opera Orchestra will be conducted by Oliver Gooch, who conducted Madam Butterfly at the Royal Albert Hall last year.

Colin Falconer is the designer for La traviata and the other main production Così fan tutte (30-31 July) and, unlike last year, both operas will be sung in the original Italian. Victoria Newlyn, acclaimed for her work with The Firework-Maker’s Daughter at the Royal Opera House, directs Così, while Tim Murray, recently seen wielding his baton for the Royal Opera’s The Importance of Being Earnest, conducts. Australian soprano Kiandra Howarth, a finalist in Placido Domingo’s 2015 Operalia Competition, sings Fiordiligi while British soprano Soraya Mafi plays Despina. Mafi was recently admired for her role as Joanna in Welsh National Opera’s production of Sweeney Todd, and other recent Mozart credits include Papagena in English National Opera’s The Magic Flute and Lavina in the UK premiere of Stephen Oliver’s completion of The Goose of Cairo.

Besides these two operas, the final week of July sees many daytime and evening events being held in the garden’s Lakeside Pavilion, with several involving celebrities such as Alan Titchmarsh and Maureen Lipman. These include two performances of Gounod’s La colombe in a new English version by Simon Butteriss (28 and 30 July), while in the Green Theatre on 29 July there will be An Evening with Sir Thomas Allen, in which the singer will talk informally about his life and career and perform his own choice of music.