Sam Smith explores one of the ‘hidden gems’ of the British summer opera festival calendar. 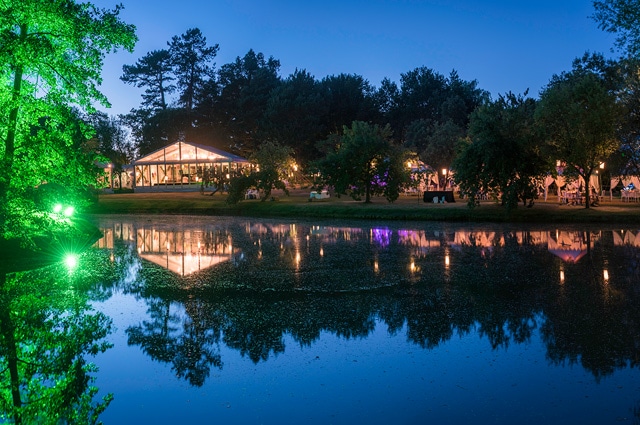 Situated near Winchfield in Hampshire, West Green House Opera may be smaller than Glyndebourne, Garsington or the Granges, but, judged by the standards of its previous seasons, its output is highly accomplished while its intimacy is actually a selling point.

Unlike any of the other players, West Green House’s festival is built around gardens that can be visited in their own right for most of the year, and so there is always much to see. Arriving early is consequently to be recommended to make the most of the setting, which includes water and walled gardens as well as a beautiful lakeside area where everyone picnics. On a good day when the sun reflects on the water and highlights the various shades of green that lie all around, the beauty of this place would be a match for anywhere in the country. Night-time scenes are no less impressive when the gardens are illuminated, making a return visit to the lakeside area after the opera something of a must if you are attending an evening performance.

The opera season lasts a mere ten days, but much is packed into that time as two full-scale productions in the venue’s Green Theatre rub shoulders with several other performances and events. The first main production is La rondine (24 and 25 July), which features what might be dubbed West Green House Opera’s ‘dream team’, comprising director and designer Richard Studer and conductor Jonathan Lyness. The pair have had such successes as Ariadne auf Naxos (2015), Un ballo in maschera (2017), Madama Butterfly and Candide (both 2018) and Die Fledermaus (2019). Studer’s strength has always rested on his ability to produce simple yet extremely effective stagings. His Die Fledermaus two years ago proved to be highly dynamic, but this year it seems likely he will use his skills to ensure that we go on every step of the protagonists’ emotional journeys in Act III. Katie Bird, who was a magnificent Cio-Cio-san in Madama Butterfly here, sings Magda, while Robyn Lyn Evans, an equally splendid Pinkerton in the same production, plays Ruggero. Prunier is played by Paul Curievici while Julia Szproch takes on Lisette and Philip Smith Rambaldo.

West Green House has also been successful at securing major talent so that in 2017 Rebecca Nash, who has played Senta for Seattle Opera, was Amelia in Un ballo in maschera, and Heather Engebretson, who has appeared as Barbarina, Sophie (Werther) and the Woodbird (Siegfried) for the Royal Opera, was Konstanze in Die Entführung aus dem Serail. In addition, rising star Filipe Manu, who played Prince Ramiro in La Cenerentola here in 2019, has since made his Royal Opera House main stage debut playing Gastone de Letorières in La traviata. This year’s second main production Eugene Onegin (31 July and 1 August) would appear to have just as much star quality about it with Catherine Wyn-Rogers playing Filipyevna and Richard Wiegold, who has sung Daland for Longborough Festival Opera and Arkel for Glyndebourne Festival Opera, playing Gremin. Nicholas Lester is Onegin, Jenny Stafford Tatyana, Tom Elwin Lensky, Angharad Lyddon Olga, Louise Winter Larina and Jeffrey Lloyd Roberts Triquet. The production is directed by Johnny Ramster, conducted by Lada Valešová, while Studer is the designer once more.

“West Green House Opera’s…  output is highly accomplished while its intimacy is actually a selling point.”

Over the past few years the season has also included concerts featuring the Simon Bates Big Band and Harry the Piano, with 2017 focusing on George Gershwin and 2018 on Cole Porter and Noel Coward. In 2019 the spirit of providing an evening that focuses more on popular culture was retained, but by presenting a hugely enjoyable Guys and Dolls in concert, and so this year we are hoping for a repeat success with Gigi in concert on 30 July.

Howard Goodall’s Invictus: A Passion is being performed on 23 July under the direction of Howard Ionascu, and features fifty voices of The Chapel Choir of Winchester, soloists of The Sixteen Kirsty Hopkins and Mark Dobell and a chamber orchestra. On each of the Sundays (25 July and 1 August) there will be Lunchtime Proms events in the smaller Lakeside Pavilion that will enable audiences to hear the stars of the two main productions in a more intimate setting.

At 12 noon on the two Saturdays (24 and 31 July) comes Around the World in 18 Arias, comprising an hour of opera, operetta and song from Simone Ibbett-Brown and Tom Low based on Phileas Fogg’s journey. This means that there are several days when it is possible to come to West Green House for more than one thing, while a trip for either weekend (including the Friday evening) would enable attendance at no less than four different events.