A behind-the-scenes look at opera preparation at the Royal Opera. 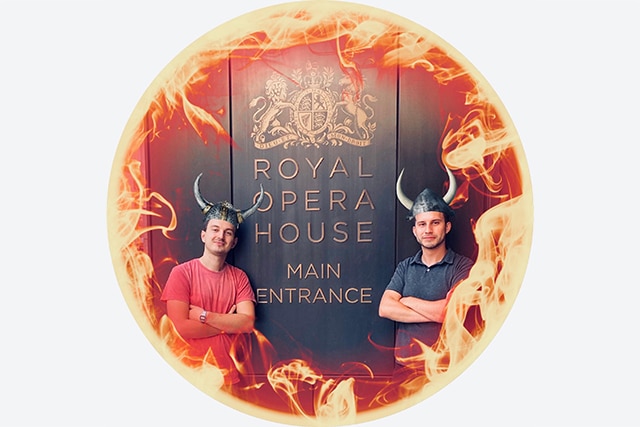 Répétiteurs. They’re rehearsal accompanists aren’t they? Well yes, and no. We came away from this illuminating evening in the company of Jette Parker Young Artists (JPYA), Michael Sikich and Michael Papadopoulos far wiser about the painstaking skill and preparation that’s required to become a répétiteur in an opera house. And it’s far, far more than accompanying rehearsals.

As part of a week-long event billed as Meet the Jette Parker Young Artists, ‘Project Ring’ took a deep dive into what’s required of a répétiteur, when preparing the company for performances of Wagner’s epic Ring Cycle. Faced with lockdown, and the prospect of no live performances, Sikich and Papadopoulos set themselves the task of learning The Ring. Fair enough – that would keep you busy, for sure – but only as the evening progressed did one become aware of the magnitude of the task they’d set themselves.

Four operas, fifteen hours of music. That’s a lot of notes, and words. Where do you start? With the score of course, and not the vocal one, but the full one. Sikich explained the painstaking process of studying the full score in depth, then translating that to the vocal/piano score. In his role as accompanist and coach he needs to know what every instrument is doing at any given point, then attempt to replicate that when he plays.

It’s not just the notes and orchestral textures that need to become second nature, but the words as well. Given Wagner wrote his own libretti or poems has he called them, words and music are indivisible. This, of course, was exactly Wagner’s intention as his quest was to create the gesamtkuntswerk (total work of art). Based on Norse mythology, the texts he wrote for his operas contain a lot of antiquated German, so can often be tricky to sing, and translate. Often translations in vocal scores are a rough, or poor approximation of the original, so part of the répétiteur’s job is to go through the text, line by line and translate each word. They’re also expected to “know the opera better than anybody in the room”, and after explaining this laborious process we were in no doubt that they did. Not only does a répétiteur have to play, they also need to know every role, so they can sing them as well.

Sikich then took us through a brief, yet fascinating, exploration of the opening of Das Rheingold (The Rhinegold), explaining how Wagner used and developed the leitmotifs, outlining the orchestration, and showing us what he meant on the piano. And yes – he did manage to create Wagner’s sound world, purely by differentiating the way he played.

They were joined by an illustrious line up of guests, including bass Brindley Sherratt, and baritone Darren Jeffrey. They both began singing Wagner four to five years ago and explained how important stamina was when tackling such demanding roles, as well as “doing it regularly”. Susanna Stranders, from the Royal Opera House music staff, told us that it had taken her six months to learn Die Walküre (The Valkyrie) to be totally inside the opera, and how she had worked on the Ring Cycle in 2012, accompanying all the stage and piano rehearsals – a herculean effort by anyone’s standards. She gave us an example from the first act of Die Walküre, paying particular attention to the precise rhythm of the sword motif, and how she created the sound world of Hunding’s leitmotif (low brass) on the piano. It was all about weight, and which part of the fingers to use – the pads.

Of course, we needed to see all this in practice, so cue soprano Anita Watson (an alumni of the JPYA programme like Jeffrey) who worked with Papadopoulos on an excerpt from the Woodbird’s music from Act II of Siegfried. Singing radiantly, it was captivating to see how with a few suggestions from Papadopoulos – linger longer on the long note, bring out the alliteration – her interpretation changed by implementing all his comments.

Our hosts rounded off the evening in the only fitting way possible – the final pages from Götterdämmerung (Twilight of the Gods), played on two pianos – and the effect was spellbinding. The Rhine swelled, Valhalla went up in flames, and order was restored to the world.

Educational, inspiring, and brilliantly conceived, it’s encouraging to know that Wagner will be in safe hands at the ROH for years to come. Roll on the Barrie Kosky Ring!