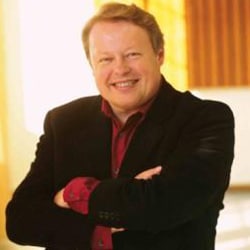 It was with a sense of shock that British classical music lost one of its most influential and hardest working figures, with the announcement of the death of Richard Hickox from a suspected heart attack.

The conductor, 60 years old, had been working on a recording session in Wales.

He was taken ill while, typically, working on the English repertoire he will be most fondly remembered by. Over the course of the last thirty years Hickox became something of an institution in the concert hall and the recording studio, taking responsibility for and working with ensembles of a consistently high standing.

Tributes to the conductor have emphasised the high regard in which he has been held. Intermusica, his agents for over 20 years, released a statement noting how “Richard never wavered or faltered in his commitment and support for others, even when faced with the most daunting challenges. His ability to inspire the best through his passion for the music he conducted created countless memorable performances in the concert hall, on the opera stage and on disc.”

When talking of Hickox it is impossible not to think of the ensembles with which he made his name. The City of London Sinfonia, the chamber orchestra he founded as the Richard Hickox Orchestra in 1971, has flourished as an ensemble committed to contemporary British composers but also known for its Education and Community programme. As well as becoming an associate guest conductor with the London Symphony Orchestra in 1985, Hickox took Directorship of the London Symphony Chorus from 1976.

More recently in 1990 the conductor co-founded Collegium Musicum 90 with violinist Simon Standage, his own vibrant contribution to the period instrument movement gathering pace in Britain at the time. Ten years later he took on the role of principal conductor with the BBC National Orchestra of Wales, moving sideways to the role of Conductor Emeritus to incorporate his growing commitments with Opera Australia. Based in Sydney, his contract with them had recently been extended to 2012 amid controversy and unfortunate rumours of discontent within the company.

The Queen recognised his achievements in the summer of 2002 with a CBE, which could easily be attributable to his service to British music on CD alone. He recorded more than 300 CDs, and his extensive discography as published by Intermusica begins with a recording in June 1975, with two J.S.Bach masses in St John’s Smith Square. It wasn’t long before the conductor was making a path for the neglected music of his own country, however, and he was soon setting down choral music by Edmund Rubbra.

On a personal level, I count Hickox responsible for introductions on disc to many of the side streets of British music. Even before he began a highly productive relationship with Chandos Records in 1988 he had already explored Vaughan Williams, Moeran and Finzi for EMI. However it was in his tenure with the independent that he really blossomed, completing searching cycles of the symphonic music of Rubbra, Sir Michael Tippett, Sir Lennox Berkeley and William Alwyn, while illuminating the little-known orchestral output of Gustav Holst, Frank Bridge, Herbert Howells and more recently Kenneth Leighton. Typically he was recording Holst’s Choral Symphony prior to his death.

Special mention should be made of Percy Grainger, whose music Hickox recorded as part of a mammoth edition for Chandos, and Vaughan Williams, whose symphony cycle with the London Symphony Orchestra was just two works shy of completion. This had begun in 2001 with a landmark recording of the composer’s original version of his London symphony, as completed by Stephen Hogger, which won a Gramophone award and a Classical Brit. The cycle continued to shed new light on these hugely rewarding works.

Hickox won four further Gramophone awards, one of which was a rarity in its standing as his second recording of Delius’ Sea Drift, with Bryn Terfel. His fifth award was for a recording of Stanford songs with the baritone Gerald Finley.

It is indicative of Hickox’s pioneering spirit that he came to record Elgar later than the composers detailed above. I was only sorry I couldn’t be more positive on the first release. Even then, however, he took pains to include Anthony Payne’s ‘elaborations’ of sketches for the Third Symphony and Sixth Pomp & Circumstance March.

It wasn’t just British music that moved Hickox. My first concert memory of him is a highly enjoyable program of Mozart, Beethoven and Mendelssohn from St Edmundsbury Cathedral. With Collegium Musicum 90 he recorded more classical repertoire, including the complete masses of Haydn and several rare examples by his contemporary Hummel. The partnership also performed Schubert’s final Mass at a late night prom in 2007, a moving experience.

Though his time with Opera Australia didn’t always run smooth there were nonetheless acclaimed recordings of Dvorak’s Rusalka and Prokofiev’s Love for Three Oranges. Doubtless further recordings were planned.

Happily Hickox was able to contribute a great deal to the Vaughan Williams centenary celebrations, conducting the Philharmonia in a festival entitled ‘The Pioneering Pilgrim’, its centrepiece the performance of the morality The Pilgrim’s Progress. Only two weeks ago he completed the festival with a performance of the composer’s Fourth symphony. Typically he was about to conduct Riders To The Sea at ENO, once again championing a British composer to the corners of his repertoire. The performance will go ahead as a tribute to him.

It is very sad that British music has lost two of its most fervent champions in Vernon Handley and now Richard Hickox, but perhaps not too much to hope that in their passing, the music they championed might assume a greater importance in the country’s concert halls.