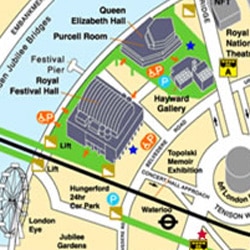 The Royal Festival Hall is finally back, and with a programme packed to bursting with great orchestras, conductors and soloists.

Opening night is 11 June, with the four Resident orchestras the London Philharmonic, Philharmonia, London Sinfonietta and Age of Enlightenment coming together for a spectacular evening of everything from Birtwistle to Julian Anderson.

The London Philharmonic’s season is the most expansive, with attention given to a startlingly wide variety of composers. Vladimir Jurowski conducts many of the concerts, with highlights being Mahler’s cantata Das Klagende Lied on 19 September and Shostakovich’s Seventh Symphony on 5 March 2008. Also do not miss his performance of the Verdi Requiem with the wonderful Barbara Frittoli on 26 April 2008.

Richard Strauss has an evening devoted to him on 19 October ; Elgar likewise on 7 November . Many of the Mahler symphonies are performed the Fourth on 28 November with Christoph Eschenbach conducting promises to be excellent while Beethoven’s piano concerti are also given a look in, with John Lill performing the First on 19 January 2008. Meanwhile, Beethoven’s First Symphony should suit perfectly Marin Alsop‘s style at the podium (13 February 2008), while her Rite of Spring is also unmissable (15 December). On 20 February 2008, Jukka-Pekka Saraste performs Debussy’s La mer, before Anne-Sophie Mutter does the Tchaikovsky Violin Concerto in D. And the hardly-guilty pleasure of the season is a screening of the silent 1925 film of Ben Hur, with the unsurpassable Carl Davis conducting his own score.

The Philharmonia also has a highlight-packed, albeit shorter season. The wonderful pianist Simon Trpceski joins the orchestra on 18 October for Ravel’s Concerto in G major, while the startlingly talented Yundi Li performs the Grieg concerto on 21 October . Vladimir Ashkenazy conducts Wagner, Bruch and Schumann on 25 October , while Mikhail Pletnev oversees Dvorak’s famous Ninth Symphony on 29 November . And the obvious must is Riccardo Muti‘s arrival on 2 December for an enticing programme that includes Ravel’s arrangement of Pictures at an Exhibition.

Muti also turns up twice in the Shell Classic International season, which boasts an inconsiderately inviting line up of talent. With the Chicago Symphony Orchestra he conducts Tchaikovsky’s Sixth Symphony on 5 October; then Ravel’s Bolero on the following day. John Eliot Gardiner conducts the Orchestre Rvolutionnaire et Romantique and the stunning Monteverdi Choir twice I would recommend Brahms’ German Requiem on 29 October. Ivan Fischer pops over with the Budapest Festival Orchestra; Mariss Jansons and the Bavarian Symphony Orchestra also perform twice; the Royal Concertgebouw play under Daniel Gatti; Mitsuko Uchida directs the Chamber Orchestra of Europe in a mainly-Mozart programme; Paul McCreesh (one of the great underrated conductors) conducts Angelika Kirchschlager and the Basel Chamber Orchestra.

“Most exciting is a concert performance of Bellini’s La straniera, mainly for the presence of Patrizia Ciofi”

Opera has an equally good run. Most exciting is a concert performance of Bellini’s La straniera on 3 November, mainly for the presence of Patrizia Ciofi, whose performance in Decca’s DVD of La Fille Du Regiment is nearly perfect. Also recommended is Das Wunder der Heliane by Korngold a criminally ignored composer with a cast including the great bass Willard White (21 November). From 5 to 7 July, Bryn Terfel takes the title role in Stephen Sondheim’s Sweeney Todd. And why not try Hammerstein’s Carmen Jones, a popular take on Bizet’s beloved opera, (from 25 July to 2 September). The Zurich Opera also arrive to perform Der Rosenkavalier on 12 April 2008, though casting is unannounced at present.

On the piano, Daniel Barenboim‘s cycle of Beethoven sonatas is absolutely essential (from 28 January 8 to 17 February 2008), and while the division of the International Piano Series concerts between the QEH and RFH unnecessarily implies a pecking order among the performers and surely the QEH is a better venue for such recitals anyway the line-up is among the most exciting that there has been recently. Alfred Brendel starts and ends the year-long festival with his usual refined selection of Classical and Romantic works; Maurizio Pollini also appears twice, on 31 October performing Schoenberg, Berg and Luigi Nono.

Angela Hewitt performs Bach’s Well Tempered Clavier Book 1 on 20 January 2008; Mitsuko Uchida performs a programme including Schumann’s Etudes Symphoniques on 2 April 2008; the programmes of Krystian Zimerman and Lang Lang have yet to be confirmed, but such is the calibre of both performers that they can get by on their names alone. Making his Piano Series debut is Leif Ove Andsnes on 10 March 2008, while names such as Piotr Anderszewski, Richard Goode and Imogen Cooper are equally unmissable.

And the list of names on the International Chamber Music season is just as impressive. The Takacs Quartet, the Alban Berg Quartet and the Emerson Quartet each contribute their different styles of performance, with the highlight being the Takacs’ world premiere performance of James MacMillan‘s Third String Quartet on 21 May 2008. The Nash Ensemble perform quintets by Mendelssohn and Schumann on 2 October ; Frank Peter Zimmermann, Antoine Tamestit and Christian Poltera perform a gorgeous programme of Mozart trios on 9 May 2008; pianists Richard Goode and Jonathan Biss perform a selection of four-handers (including Stravinsky’s Agon) on 31 May 2008.

Then we come to the anniversary concert of the Orchestra of the Age of Enlightenment, which boasts not only two intervals, but also four conductors. How we might complain of overkill if the conductors were not Vladimir Jurowski, Charles Mackerras, Roger Norrington and Mark Elder. And with soloists including John Mark Ainsley and Philip Langridge, 30 June looks to be a night to remember.

Booking is not yet open for many concerts at the start of the season, and rumours abound of appearances from, among others of equal note, Simon Rattle, Andreas Scholl and Sally Matthews. All we can hope for is an acoustic to match the quality of performance.