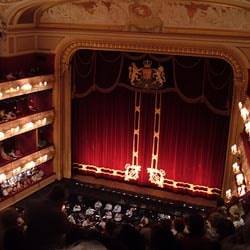 So the Royal Opera’s new season is announced, and what a treat it looks to be.

Even the seemingly obligatory revivals are bolstered by attractive casts, and such a lot is new and enticing.

The three Ring cycles are pretty much old news now, but even Keith Warner‘s confused, overly ambitious and critically panned production is worth enduring for casts that include Bryn Terfel and Placido Domingo (October 2007).

The appearance of Wagner’s trilogy also introduces one of the themes of the season: that of mythology. Wagner’s hallucinatory final opera Parsifal – all magic castles, mysterious knights and holy Grails – returns in December 2007, under the direction of Klaus Michael Grber, and most excitingly finds ex-ROH Music Director Bernard Haitink in the pit. Not that the thrills will be solely orchestral: Christopher Ventris (superb in Lady Macbeth of Mtsensk last season) plays Parsifal, while support from names such as John Tomlinson and Willard White turns this into an unmissable run.

Gluck’s tempestuous drama Iphignie en Tauride, meanwhile, is given superlative treatment in a production new to the ROH. The presences of Susan Graham and Simon Keenlyside should be recommendation enough, but add to that the ever-astounding Orchestra of the Age of Enlightenment under Ivor Bolton and there is no reason not to snap up the tickets fast (September 2007).

Strauss’s Ariadne auf Naxos is essential also, neither because Mark Elder is conducting (though for my money he is the best conductor currently working in England) nor even because the stupendous accompanying cast includes Thomas Allen and Christopher Maltman, but rather because the run heralds the return of Deborah Voigt to the ROH. Turn up and give the (now not so fat) lady a loud cheer (June/July 2008). And still on the subject of myths and legends, do not miss the world premiere of Harrison Birtwistle’s The Minotaur: Music Director Antonio Pappano conducts, while John Tomlinson and Christine Rice head the fiery cast (April 2008).

“Anna Netrebko brings her famed interpretation of Violetta to London”

This is not to say, however, that the season is all Gods and monsters. On the contrary, there is a vast range of material. Verdi lovers can hardly be disappointed with the three scheduled productions. La Traviata may be back again in Richard Eyre‘s production, but this should be a lot better than last year’s disastrous revival. Why? Well, first because Anna Netrebko brings her famed interpretation of Violetta to London; second because Jonas Kaufmann returns after his extraordinary Don Jos last season to sing Alfredo; third because Dmitri Hvorostovsky appears as Giorgio Germont. Casts like this do not come around every day, and Cast B isn’t far behind (January/February 2007).

Then we have the 1881 version of Simon Boccanegra, with Nina Stemme and Lucio Gallo heading the cast, and (very bizarrely) John Eliot Gardiner stepping outside his regular repertoire to conduct Verdi’s intricate score (May 2008). But the highlight is Don Carlo in a new production from Nicholas Hytner. And if that were not enough, the extraordinary Mexican tenor Rolando Villazn sings the title role. Marina Poplavskaya, a former Young Artist, sings the role of Elisabeth (how exciting to see the Royal Opera’s training programme reap such glorious rewards), while Simon Keenlyside is Rodrigo (June 2008).

Speaking of fluff, I was not alone in finding Francesca Zambello‘s new production of Carmen ridiculous, but it is back anyway for what will be a sold out run. Nancy Fabiola-Herrera sings the title role, while Marcelo Alvarez tackles Don Jos after his acclaimed (if occasionally stretched) Manrico last season. I was also pleased to see that Susan Gritton will be Micala: the girl has great talent (March/April 2008).

More revivals elsewhere: the new (and only in places improved) Tosca with an as-yet unannounced cast; John Copley‘s impossible-not-to-fall-in-love-with-it production of La Bohme with Christina Gallardo-Domas as Mimi (July 2008); David McVicar‘s stupendous new Marriage of Figaro, already on its second revival, with Charles Mackerras conducting most of the run and a strong cast including Peter Mattei‘s exceptional count (June/July 2008).

McVicar’s Magic Flute is also back, with a fine first cast including the effervescent Kate Royal as Pamina, Simon Keenlyside as Papageno and Erika Miklosa continuing to build herself a career on singing just the Queen of the Night. The two castings perform through January to March 2008. And for some reason, Steven Pimlott‘s much-criticised 2006 production of Eugene Onegin will return, though Jir Belohlvek‘s conducting debut at the ROH is tempting, as is the presence of Piotr Beczala in the role of Lensky: if anyone can make a case for this bitty role, it is surely him.

And let us not forget the new production of Strauss’s Salome in February/March 2008, again from McVicar, with Philippe Jordan conducting (his interpretation of La Bohme last season was quite stunning). Also given a new production is Stravinsky’s The Rake’s Progress, and the big draw is the presence of Thomas Ads in the pit. Sally Matthews and John Relyea head the cast (July 2008). The Linbury Studio is also given a couple of productions – one Britten, one Ads – and both should be urgently attended.