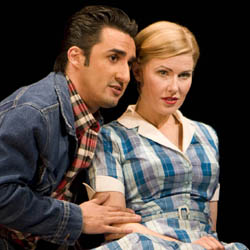 Soprano Sally Matthews is one of the most exciting talents of her generation.

Her career has taken off so spectacularly that it seems extraordinary that she was studying at Guildhall as recently as 2000 and her time with the Royal Opera Young Artists ended only five years ago.

She returns to the house next week for her role debut in Stravinsky’s The Rake’s Progress.

Robert Lepage’s production arrives at the Royal Opera House as Candide plays down the road at the Coliseum. The two shows have a lot in common, both with 18th Century subjects, written by 20th Century composers and now radically realised by maverick Canadian directors. In a break just before the dress rehearsal of Stravinsky’s opera (in which she plays Anne Truelove), Sally Matthews told me that some of the team had been along to the Bernstein at ENO and came back full of how similar the two productions are.

Both directors have put their works in a post-war setting. While Voltaire’s ingenuous youth is whirled through a less than best of all possible worlds that satirises many aspects of the American Dream, Tom Rakewell in the Stravinsky work swaps his progression through Enlightenment England for one that begins in Texas and takes-in Malibu. An element of pastiche is also shared by both works, with Bernstein drawing on any number of different genres and Stravinsky’s score his most neo-classical, with a willowy Mozartian feel to it.

Matthews is full of praise for both Lepage and Thomas Ads, who is conducting the five performances of The Rake’s Progress. It’s her first time working with either man. “It sounds like a clich to say how lovely everyone is,” she says, “but it’s a great working atmosphere. Robert is wonderful, a very, very kind man, so easy to work with. He doesn’t impose anything, although he has a very strong vision. He’s quite shy and almost apologetic about asking you to do things. He gets the perfect balance of ideas and imagination.”

“Tom Ads is a genius”

“Tom (Ads) is a genius of course,” she adds, “we all know that but he’s also fabulous to work with. He also doesn’t impose and he really listens to you.” Matthews’ enthusiasm for her work brims over throughout our conversation. She will return to Covent Garden in September, kicking off the season with Cavalli’s La Calisto, a production originated in Munich, which she also describes as “great fun”. The director for this is another visionary, David Alden, with a knack of updating without going down the tiresome “Euro-trash” route.

“La Calisto is outrageous and not traditional in any way. In Munich they loved it and there they really let you know when they like something. In London, audiences tend to be more reserved, which is easier – you can sometimes kid yourself that they’ve liked something when they maybe aren’t so keen. In Germany, they’ll boo loudly, as they did with Alice in Wonderland (Matthews played the title character in Unsuk Chin’s bizarre re-working of Lewis Carroll’s story in 2006).”

Another contemporary composer she’s worked with is Mark-Anthony Turnage, who developed Two Baudelaire Songs with her a couple of years ago. “He’s a wacky guy, a real cool customer and also really easy to work with. He’s just very trendy,” she says, “more like a pop star than a classical composer.” The allusion to the world of “pop” leads me on to ask her if she’s ever been tempted to go down the “pop opera” route and she’s unequivocal that it’s not for her. With a combination of great looks (she can rival Anna Netrebko in that department) and a voice of tremendous beauty, you would expect record companies to be knocking down her door in their quest for the latest classical glamour star. It’s one she’s not opening.

“It’s fine for people who want to do that but I want to be working in opera houses. This is a tough career but when you’ve worked so hard to train, you don’t want to throw it all away. I want to be still working in opera when I’m 40, 50, 60.” She says she’s made a very conscious decision that the temptations of short-term commercial success are not ones she’s going to fall for.

Thankfully the world’s opera houses have taken notice and, looking ahead, there is plenty of work on the horizon, although there’ll be an enforced break as she’s expecting a baby in January. Some inevitable cancellations have followed but it won’t be long before she’ll be back in the saddle. She’s looking forward to working again with Daniel Harding and the LSO (they’ll be doing Messiaen’s Pomes pour Mi at the Barbican in October). There’s a Rosenkavalier (Sophie) in Amsterdam to come, Fiordiligi at both Covent Garden and Glyndebourne (she’s already sung the part in Amsterdam) and a Countess in Figaro at La Monnaie, Brussels.

“I try to be careful with my choices”

I ask her about her longer-term ambitions and she says she’s not really ambitious, or at least tries to moderate her aspirations. “I want to do my own thing and enjoy myself. I try to be careful with my choices and deal with things as they come along,” she says. There are roles she covets, although some are a way into the future. “I’d like to do more Strauss I love Capriccio – and one day Janacek’s Jenufa. I’ve done Rusalka for Opera Australia and it’s a role I’d love to do again. I think it’s a part that will grow with me. But I’d be more than happy to do Mozart for years to come. If I did nothing else, I’d be a happy bunny.”

She was stunning as Sifare in the young Mozart’s Mitridate a few years ago at the Royal Opera House. Not a glamorous role, she was all but unrecognisable in a high-fitting wig and heavy make-up but it was a remarkable performance for a singer not long released from the Young Artist scheme. “That was a whirlwind. I was asked nine days before opening if I would learn the part. It was the hardest thing I’ve ever done but also a real highlight.”

There has been a lack of recording opportunities so far, a serious oversight by the record companies but something that will hopefully be remedied as Matthews’ voice matures. In the meantime, you can see her as a gorgeous Fiordiligi in some chunky extracts from the Nederlandse Opera production of Cos fan tutte on Youtube or, far better, get along to the ROH next week for The Rake’s Progress and again in September for that production of La Calisto.

Whatever the strengths of Lepage’s and Alden’s productions, Sally Matthews alone makes them unmissable events.