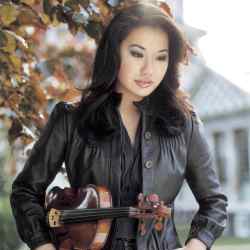 Sarah Chang is the classic child prodigy, beginningto play the violin at the age of four, performing withmajor orchestras by the age of eight.

While mostviolinists have barely reached grade one by thatstage, Chang was learning concertos at the Juilliardschool, mentored by Isaac Stern.

It’s to one ofthose concertos that she has returned for a tour ofthe US with the London Philharmonic Orchestra.Having justarrived in the UK to rehearse, she’s barely out of theairport but cheerily greeting me. She gets straightinto a recent tour with Kurt Masur. “We weredoing Brahms together, and then it was a quick switchand we were doing Sibelius already! It’s pretty crazybut it’s all good, really good.”

She seems satisfied with the Brahms performances.”They went so well, I mean I’ve waited for ages to dothis with him, I’ve been playing with him since I wasabout 9 or 10 but for some reason it was alwaysTchaikovsky, Mendelssohn, Sibelius, you name it,everything but the Brahms, and I’ve been whining andnagging at him to do for ever and ever! I don’t knowif he was waiting for me to grow up a bit, or if hejust thought it was not a great thing for a twelveyear old to be doing! I was just thrilled about twoyears ago when the Leipzig date came in and he said’You know what, I think we should do Brahms now’. Iwas just floored, I was so happy!”

We turn to the piece she’s touring, the Sibeliusconcerto. It clearly has a place high in heraffections. “I learnt that when I was eight, I was astudent at Juilliard and I started playing itimmediately all over the place. I recorded it as wellwhen I was about fifteen or sixteen with Berlin, soit’s been a part of my repertoire for a very very longtime, but the great thing about things like that isyou keep on rediscovering them and they never get old.With some pieces you go through a love/hate phase, youknow, it goes up and down, and with the Sibelius forsome reason it’s always been constant for me, I’vealways loved that piece.”

Technically, it’s very challenging, as even aplayer of Chang’s ability agrees. “It’s got a lot inthere! I mean, everything you could ever ask of aviolinist, like scales, arpeggios, double stops,triple stops, you name it, it’s in there!’ She goes onto recount a visit to the composer’s house in Finland.’It’s amazing, it’s about an hour or so from Helsinkiand it’s so cold! I went there in the middle ofwinter, and they looked at me as if I’d been asked tobe taken to the moon!

“It’s usually closed in thewinter because it’s so cold but I insisted, and theytook me which was real sweet of them. It really was inthe middle of the woods, it looked like a winterwonderland. There’s nothing there except this onelittle house, it’s so isolated and so peaceful andabsolutely gorgeous! But you realize how private theman was because there’s nothing near there. Apparentlyhe valued his privacy and the silence so much that hewouldn’t let them have running water, he had to sendone of his daughters to the well every morning. I’m soglad I wasn’t his daughter! But in any case it showshow much he valued something when he was working onit, in a way slightly obsessive but it createdmasterpieces!”

Chang’s recording career to date has alternatedbetween concertos and chamber music, and it’s clearthis approach reaps benefits for her. “I started mycareer out extremely early, and everything was soconcerto based that I think I missed out on the wholechamber music experience, so when I hit my teens Imade this really conscious effort to play as muchchamber music as I could and go to as many chamberfestivals during the summer. I had these companions,you know, and just started repeatedly playing yearafter year with them and for some reason the BerlinPhilharmonic members clicked on such an amazing levelthat we just continued to work together and do tours,even when there were no recording projects. Thechamber music repertoire is so massive, it’s actuallyquite daunting, and you learn so much and you onlyrealize it’s the tip of the iceberg. I didn’t pick aneasy instrument!”

In 2006 Chang recorded concertos by Shostakovichand Prokofiev, the well received disc conducted by oneof her top conductors. “To see it come to fruition, andto see it actually happen with not just Berlin butwith Simon Rattle who I’ve always loved working with,was so exciting. It was completely live, which I knewwas a huge risk, but I wouldn’t have done it any otherway. That’s a recording I’m really proud of. And afterthat we’re actually doing Vivaldi’s Four Seasons,which will be fun! Unlike a lot of the pieces I play,which I learnt when I was barely out of like toddleryears, Vivaldi is something I did not even touch untillast year, which is a little unusual because I knowit’s so popular and everybody plays it! There’s a lotof freedom with Vivaldi and I’m having a lot of funwith that right now.”

As Chang agrees, there are several ways to approachVivaldi. “You’re absolutely right, there are peoplewho stay very true to the score and don’t embellishvery much, and there are those who just say well thescore’s there as an outline but have freedom to putornamentations, scales and runs in and just gocrazy!”

With Sarah just having arrived on a plane from NewYork, it seems appropriate to raise the problems ofbaggage restrictions. This is met with outrightlaughter! “You’ve tapped into a topic that I think110% of musicians are moaning about right now! It’spretty horrendous but I think all we can do isunderstand that everybody’s just trying to do theirjob, and safety comes first, first and foremost. Youknow I’ve been very fortunate. I’ve had some peoplepretty unhappy about the strings, and I’ve had my muteconfiscated, but Yo-Yo Ma was telling me theymade him check in his end pin on his cello, he had togo from the X-ray point to go back and check it in! Ithasn’t been too much fun but you learn to work with itI guess.”

This last exchange is indicative of Chang’s wholeattitude, very much upbeat and focused on enjoying themusic. Watching her play live, this attitude is clearin her performances, as she remains at the top of hergame.