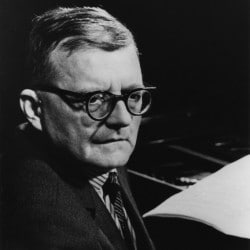 Monday, 25th September will mark the exact centenary of the birth ofDmitri Shostakovich, who has latterly become one of the most influentialand most performed composers of his generation – second only, perhaps, toStravinsky.

Anniversaries make life easy for concert promoters and record labels,their itineraries handed to them on a plate.

Inevitably this year the focushas tended to fall on two of the great bodies of work of the twentiethcentury – Shostakovich’s symphonies and string quartets, fifteen ofeach.

Shostakovich, of course, lived through very difficult times. Whilst anappreciation of this is not mandatory to form a connection with his musicit can enhance the experience greatly. A book such as Elizabeth Wilson’sShostakovich: A Life Remembered provides the ultimate literarycompanion here, giving not only substantial anecdotes from friends andperformers but offering a valuable historical context to each work. Since alot of Shostakovich’s reputation exists on hype around his oppression bythe Soviet regime, a sobering account such as this is most welcome.

The symphonies first, ranging from the bombast of the strange earlychoral works nos. 2 and 3 to the larger scale wartime pieces such as theLeningrad, then through to later song-based works and finally theluminous Fifteenth. While the frontrunners in the concert hall tend to bethe Fifth and Tenth, it’s heartening to see important works such as theFourth grow in stature – a complete turnaround for this work afterShostakovich hurriedly withdrew it in 1936, thus protecting it from Sovietcensorship. It finally saw the light of day in 1960.

The Fourth was one of eight symphonies performed at the Proms this year,with a hyper-intense Vladimir Ashkenazy directing the European UnionYouth Orchestra. Earlierin the season Vassily Sinaisky impressed with an extremelywell-drilled Eighth,another symphony that has established itself in the core repertoire despiteits length. Heard in the right performance both symphonies are a shatteringexperience, and strike a chord with their inner resolve in the face ofterror.

Elsewhere complete cycles of the symphonies have inevitably been headedby the tireless Valery Gergiev, whose Barbican series began a yearago. This year has seen a searing Fourteenth symphony and anuncompromising Proms account of the Thirteenth (Babi-Yar) the late stand-in bassMikhail Petrenko making quite an impression. Babi-Yar willreappear at the Barbican with the Kirov Orchestra, paired with theunusually balanced Sixth, while a night later on December 6 the underratedTwelfth symphony will be complemented by the Tenth. The coldly cinematicEleventh will follow in the same week, a work whose portrayal of PalaceSquare in the winter and the subsequent horrors of the 1905 uprising isprofoundly moving.

While the symphonies are an obvious way in, the string quartets have ifanything even more to offer. Occupying a later period in his life, they aremore representative of the composer’s mature style – the second quartetonly just predates the ninth symphony – and are keenly structured and moreconsistently argued. The Emerson String Quartet has given severalcomplete recitals of the fifteen on these shores, and their South Bankconcerts earlier this year were generally well received. Less prominencewas given to a wider-ranging cycle at the Wigmore Hall, where the up andcoming Aviv and Jerusalem string quartets gave sympatheticperformances.

A good way in to the quartets is to start with the concise Seventh, ahighly atmospheric three movement work, or with the sunny disposition ofthe First. The late works will reward repeated listening, and if you canfind a performance of the Fifteenth then this is definitely not a work tomiss, long-performed by the Borodin String Quartet incandlelight.

Of course Shostakovich is much more than the sum of those thirty works,though they do form the backbone of his output. For the stage and the bigscreen he also excelled, if proving a little less consistent in delivery.Gergiev again rose to the challenge on this front, though it was sad toreport uneven reviews and relatively sparse attendances for the Kirov’sShostakovich on Stage season, a possible victim of heat, holidays,Proms and prices.

Anyone missing The Nosedid so at their ownloss, however, its slap in the face production thrilling to watch underGergiev’s manic direction. By no means overshadowed was The Opera Group inthe same opera.Meanwhile Moscow Cheryomushki showcased Shostakovich’s ability tomake the listener laugh out loud – a facet sadly overlooked by EvgenyKissin in his Prom performance of the outrageous first piano concerto.

The ballet, too, was a beneficiary – an interesting staging of TheGolden Age fromthe Kirov bettered still two weeks later by the Bolshoi company revivingThe Bright Stream.

The Proms were almost saturated with Shostakovich this year – a coupleof symphonies too many perhaps, and a shame that two fine concertos – thesecond for both cello and violin – were comparatively overlooked byprogrammers. One laudable inclusion was that of the Suite on verses ofMichelangelo, a formidable late song cycle. Ildar Abdrazakov‘sperformance, and earlierrecording for Chandos, did much to remind us of Shostakovich’s prowess as avocal composer. In October the Wigmore Hall will go one step further,presenting the Mariinsky Theatre Academy for Young Artists accompanied byValery Gergiev’s sister Larissa Gergieva in the complete songs, overa long weekend from 21 October.

In the recorded respect Decca have honoured several of the composer’svocal works, presenting them as part of a box set that includes MyungWha Chung‘s recording of Lady Macbeth. In fact Decca havereleased five such sets, including Bernard Haitink‘s assuredsymphony cycle with the London Philharmonic and a set of orchestral worksnotable for three discs of ebullient stage and film works from RiccardoChailly.

A full price set of the symphonies will set you back somewhat, so it’sgood to consider budget offerings from the likes of Rudolf Barshai(Brilliant Classics) and particularly Mariss Jansons‘ recentcollection for EMI. Assembled over some eighteen years, it is something ofa world tour, taking in a slightly docile Philadelphia Eleventh, a richVienna Philharmonic Fifth and a spectacular Berlin Philharmonic First forstarters. His powerful versions of the Tenth (also Philadelphia) and thesong settings of the Fourteenth (with notable contributions from soloistsLarissa Gogolevskaya and Sergei Aleksashkin) are trulymemorable, while the early Ninth (Oslo) skates along at quite a pace.

With the symphonies however an authentically Russian recording is wellnigh essential. So while Rostropovich and the LSO have many fine things tosay in their (expensive!) set for Warners, it proves impossible to displacethree conductors with whom Shostakovich worked closely – EvgeniMravinsky, Kirill Kondrashin and Gennadi Rozhdestvensky.All bring consistently profound and searching insights to the music -Rozhdestvensky characterful and humourous when required, Kondrashinsecuring stunning intensity from the Moscow Philharmonic for the Fourteenthin particular, and the peerless Mravinsky going even further in hisidentification with the composer’s thoughts. Sadly recordings by these aredifficult to locate but the rewards are handsome.

The string quartets were championed on record by the Borodin StringQuartet, though again their recordings are difficult to locate. Withseemingly no likelihood of a reissue from BMG, the first fourteen quartetscan be found on Chandos, while digital alternatives are offered by StPetersburg (Hyperion) and the Sorrel string quartet, again onChandos.

If you wish to venture off the beaten track a little, Chandos also boastserviceable recordings of the film scores and ballets, of whichRozhdestvensky’s Golden Age is notable, while one of Decca’s setspresents Vladimir Ashkenazy in the piano works. These include the24 Preludes and Fugues, an intimate collection that spans each majorand minor key, taking the listener on a real journey.

There is plenty to cheer, then, both for concertgoer and home listener.If you can look past the many presentations of the great symphonies therewards are plentiful. And in the unlikely event you’re completely new tothe composer, try starting with the Fifth symphony and some ballet music(The Gadfly, perhaps). I guarantee you won’t stop there.