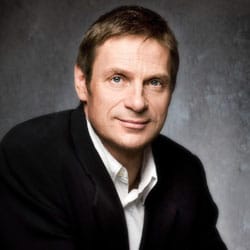 Actor Laurence Olivier once catalogued the injuries he had received during a lifetime of physically demanding stage performances. It was a long list which involved most parts of his body.

British Baritone Simon Keenlyside, an acting singer renowned for bringing an intense physicality to his opera roles, could probably come up with a similar list if pressed.It was a back injury, sustained during an earlier performance, which prevented him taking part in Iphignie en Tauride in both Chicago and San Francisco earlier this year. Thankfully, for London operagoers, he is fully fit again for the Royal Opera premiere of the production which takes place on 10 September. The injury that had come back to haunt him happened when he was a young singer playing in Turandot at Wembley Arena and he fell off a ramp into the pit with a mask on, “smashing myself to pieces”. Later, his debut as Eugene Onegin was delayed for years because he fell through a trap door at Covent Garden and mangled his hand.

He’s very quick to point out, though, that all his injuries came about backstage rather than onstage and were nothing to do with the famously physical approach he takes to his work. It’s as though he wants to scotch the myth that he is something of a daredevil who likes to undertake stunts onstage. “All singers get hurt. The backstage area is deadly, full of cables and sharp things. I’ve never hurt myself doing stunts. As you come out of the light into the wings, there’s the danger. But also, if you’re any sort of a stage animal, this is a contact sport. It happens to everyone. It’s a bit of a circus job.”

“If you’re Billy Budd, you’re an idiot if you come on and cartwheel all the way through it but you do need to do something early on to establish to the audience that you are different, as a character, and if you’ve done your job properly, people will say you were very athletic in that’ but actually you’ve only done a couple of things to nail the point. I’ve played lots of parts that aren’t at all physical.”

The reason he’s keen to play down this part of his work is that he sees jumping around as just a form of showing off and what comes across strongly when talking to him is an absolute commitment to serving the writer, and doing nothing extraneous, particularly when it’s a genius of the order of Mozart, Verdi or Gluck. “What’s important is to use only the colours in your body and voice that are important for the piece.” Colour is a word he uses again and again with regard to a performer’s place within a work, as well as the quality one brings to the role. “You might want to do all sorts of things but you can only do what the ‘master’ has given you. To do more to show all the toys in your box vocally or physically all the time – is very tiresome.”

I meet Keenlyside in his dressing room during a break in rehearsals one week before the production of Gluck’s 1779 Iphignie en Tauride opens, the first time the work has been presented at Covent Garden in over 30 years. He has played the part of Oreste many times before (including as a young singer at WNO with Charles Mackerras “when I wasn’t ready for it”), and has also worked with mezzo Susan Graham often, but this is the first time the part and the co-star have coincided.

“It’s very much an internalised piece. It’s also like a jigsaw puzzle and you have to find your place in it. I like this production very much. It’s a brave man (director Robert Carsen) who has an empty set with just a few punctuation marks on it. That’s exactly what I want from it, a platform for the performers to work on.” He talks with enthusiasm about how this works at Shakespeare’s Globe on the South Bank (he’s a very keen theatregoer), where the theatre provides a backdrop for the actors to work against and little else.

He looks stumped for a moment when I throw the off-the-wall suggestion at him that Gluck’s opera seria is like an Alan Ayckbourn play. A comparison between Euripides (on which Iphignie is based) and the master comedy writer of Scarborough may not be an obvious one but in one respect there is a similarity. In early Ayckbourn, plots often revolve around mistaken identity and one person saying “I’m not who you think I am” would bring the play to a premature end. If Oreste would just say “I am Oreste” (or Iphignie reveal her identity for that matter), the same would happen. “That’s exactly right,” he says, “and so you spend most of the opera biting your tongue.” Not too hard, I hope, or it could mean another hospital visit.

He says he’ll never play the same character (at another point in the legend) in Richard Strauss’ Elektra. “I love the piece but it’s just not a part for me,” he says emphatically. I sense that he’s not easily persuaded about what’s right for his career. There have only been a few Strauss roles in Keenlyside’s repertoire including a Harlequin in Ariadne auf Naxos and Olivier in Capriccio. “I was going to do Mandryka in Arabella about ten years ago but I pulled out and I don’t think it’s something I’ll do now. I’m not sorry about that.”

He says that the recent performances of Billy Budd at ENO were the last that he will do in the part. The same applies to Pellas in Pellas et Melisande, the Covent Garden run of Debussy’s masterpiece in May being his final one in that role. “I love it but there are other fish to fry”, he says. While nobody had anything bad to say about the musical values of the production (conducted by Simon Rattle), the staging by Stanislas Nordey came in for some criticism. Keenlyside discreetly indicates that he too wasn’t keen on the way the director let symbolism overwhelm the naturalism of the piece. “He’s a wonderful director and the process was very exciting and enjoyable but, while I believe it should be Real Life overlaid by Symbolism, ultimately he allowed the opposite to happen. Like Iphignie, and Winterreise, it’s about an inner journey. There’s a danger of reducing the actors to puppets if the symbolism is too heavy.”

He speaks with great enthusiasm about the recent revival of Thomas Ads’ The Tempest (“a masterpiece”). There were rumours of a recording of the opera but nothing has materialised and he’s modest about his chances of being cast if it does happen. “I would be thrilled to bits if it came my way but life’s unpredictable.” There are no plans for further performances of the work, other than some concert versions in Amsterdam next year, but he says he would clear his diary if it came up again.

“I have flirted with the idea of singing Siegmund in concert”

Future performances include his acclaimed Papageno and a new production of Don Carlo, both at the Royal Opera. There’s also his debut in Wozzeck, at Opera Bastille in the Spring and, years after he was first supposed to do it, Eugene Onegin in Vienna. He’ll never do Janacek or most Russian roles (“I can’t avoid Onegin, but nothing else”) and other than Tannhauser, in which he’s been singing Wolfram for years, he doesn’t see Wagner as a route to go as he gets older. “Mind you, I have flirted with the idea of singing Siegmund in concert”. Sadly, if this intriguing prospect comes to fruition, like most of his debuts, it won’t be in the UK. He points out that most singers find that they only get cast in their own countries once they’ve proved themselves in a role abroad, a strange reflection on management attitudes.

London still has plenty else to look forward to from this artist, with appearances at Covent Garden and Wigmore Hall lined up in the coming months. In the immediate future, Keenlyside is joined by Susan Graham and Paul Groves in Gluck’s Iphignie en Tauride at the Royal Opera House for just six performances on 10, 13, 16, 25, 27 and 29 September. Tickets on 020 7304 4000 or online at www.roh.org.uk