Spotlight: Stile Antico’s The Journey of the Mayflower

A new project from Stile Antico is explored by Barry Creasy. 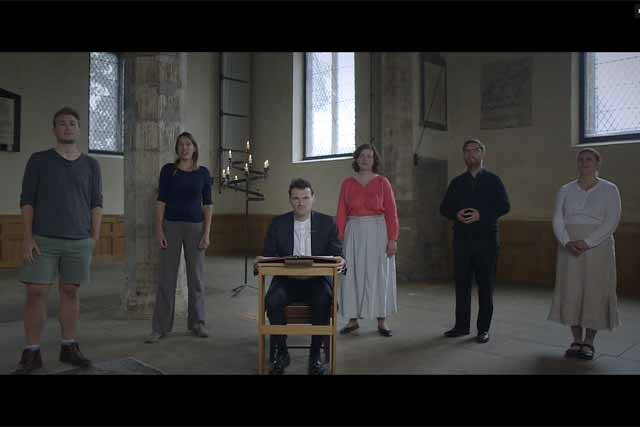 “One small candle may light a thousand”

“One match can burn a forest”

These two lines are spoken by different people towards the end of Stile Antico’s second sound and vision recording project during the pandemic, and have a great deal of resonance – not only within the story being told in this presentation of the Pilgrim Fathers’ voyage, but also in today’s uncertain world of viral transmission, be it literal or digital.

Set in a suitably empty, pewless church, Stile Antico’s journey – describing the lengthy exodus of Lincolnshire Puritans to their New England settlement via a sojourn in the Netherlands and the eventual 66 day transatlantic voyage – unfolds through words and music, using William Bradford’s contemporaneous account (“Of Plim̃oth Plantation”) as a basis for the spoken material, and short works from composers of the period as emotional commentary. Katharine Armitage’s text puts words into the mouths of the migrants (played by members of the group), bringing their experience to life through both humour and sorrow, and providing a much needed foil for Bradford’s somewhat dry and matter of fact account.

The music is cleverly chosen to be appropriate in many ways. The works might just have been heard by at least some of the Mayflower’s passengers, but, more pointedly, they are nearly all psalm texts, the singing of psalms being a hallmark of Protestant fervour at the time. Indeed, the majority of the composers chosen are well-known for their embracing of the Reformation and their willingness to set the new, English language liturgies to music. The two exceptions here (which might, indeed, have raised more than a Puritan eyebrow) are William Byrd and John Dowland (both establishment figures whose Catholicism was given a nod and a wink from authority). Most of the pieces, though, carry the additional delight of being relatively unknown. Orlando Gibbons’ O clap your hands (marking the pilgrims’ arrival in Leiden) is perhaps the only mainstream piece of the English Renaissance to make an appearance.

The presentation begins with the slowly unfolding polyphony of John Amner’s A stranger here, a poetic extension of lines from Psalm 31. Thomas Tomkins’ Woe is me (Psalm 120), full of spiky English polyphonic tropes and a slippery tonality, amplifies the feelings of the puritans’ persecution, and, after their journey to the Netherlands, Jan Sweelinck’s oddly French Estans assis aux rives aquatiques (Psalm 137 – By the waters of Babylon) portrays their exile in ‘a strange land’. Tomkins’ polyphonic setting of Psalm 86, O God, the proud are risen against me is contrasted nicely by Thomas Campion’s simple, hymnodic, Never, weather-beaten sail in illustrating the final departure from the English Plymouth. The Dowland piece (Shout to Jehovah) was a lovely revelation; it’s a straightforward setting of the traditional Old Hundredth tune, given in unison and different varieties of fauxbourdon, but its stark simplicity and peerless execution made it the star of the show. The arrival in the New World, the establishment of settlement, the controversial relationships with the Wampanoag people, and the outbreaks of disease and conflict are all sensitively dealt with, and here, Bradford’s account is cleverly contradicted by the views of the ordinary settlers, who demonstrate to the audience the hope and the despair both of their own situation and for the precarious future. It is in this section that the intensity of the style of English polyphony, and the brilliance of its composers becomes even more concentrated: Byrd’s Praise our Lord, all ye gentiles and Tomkins’ O sing unto the Lord a new song provide the triumphantly hopeful commentaries (some gloriously piquant false relations twinkling in the Tomkins’ ‘Alleluias’), while the misery of loss and uncertainty are illustrated by Thomas Morley’s Laboravi in gemitu meo and Byrd’s secular partsong Retire my soul.

Stile Antico give us, as usual, some stunning performances, full of attention to detail on dynamic and phrasing, such that, even in the middle of complex polyphony, changes in metre or emphasis get the slightest of introductory pauses – all, of course, managed without a conductor. The musical material is intelligently contrasted, and there’s an instinctive understanding of the period. The only slight cavil on this front is that, given the overall concept of the recording as a ‘riff on a historical event’, perhaps the group might have researched and deployed some more contemporaneous pronunciation (the Sweelinck, for example, seemed like a perfect opportunity for reflecting, in the pronunciation, the peculiarities of a long-term resident of Amsterdam writing in French).

The Journey of the Mayflower is available on Vimeo here.